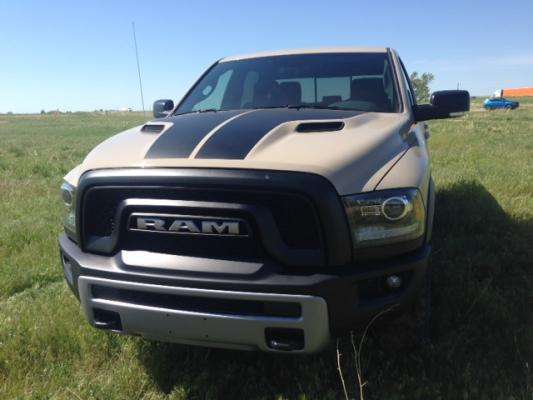 A new safety feature on the 2017 Ram 1500s meant to protect drivers who are backing up is catching drivers off-guard. Some current owners have suggestions on what to do back up effectively.
Advertisement

It happens pretty frequently, drivers open their door so they can lean out while backing up and make sure they don’t hit anyone or anything. Ram is trying to stop drivers from doing that if they aren’t being exceptionally careful. Swan, from Iowa, asked members of a popular Ram forum for help. “Ok my brother-in-law just got a new 2017 Ram Tradesmen 1500, pretty plain Jane but it works for what he does with a truck. When he was backing up to hook up a trailer he cracked the driver door open to see something as he was in reverse and the truck wouldn't move after that. If you close the door and cycle the shifter knob to P and back to D or R then the truck will move. My 2014 Limited doesn't do this. I figure this is again a "safety" issue.

Several Ram owners were stunned to hear this. Many immediately went out and checked. Mystro, had never heard of such a thing. “Gotta try this. It might be a rotary knob only safety item.”

New Safety feature in 2017 Ram and other Fiat-Chrysler vehicles

Thunder, a frequent poster, commented on the change and the addition of the safety feature. “Yeah this is a recent addition. People were leaving their vehicles in gear and they would run away because they didn't set the parking brake. Some actor ran himself over; people wouldn't admit it was their fault and blamed the vehicle despite there being no evidence it shifted itself.”

Thunder is referring to an accident in 2016. “Star Trek” actor Anton Yelchin was killed when his Jeep rolled down his driveway and trapped him between his Jeep and a brick post. Fiat Chrysler had already filed a recall notice for the 1.1 million cars and SUVs because there was confusion over whether the vehicles were in park. There were several accidents where people got out of their vehicles and were hit. The actor’s family is suing Fiat-Chrysler over his death.

Mac, from Boston added, “Software was added to automatically put the truck in park if you try to get out of the truck or turn off the engine.”

Dan, from West Virginia, says that this technology has been around for a while. “This isn't new, BMW has had this feature for years maybe even a decade.”

Blade, from Texas, agrees. “Mercedes has a similar feature, only, when you open the door while in motion, it jams the vehicle into park. It makes nasty, expensive sounding noises, too.”

How to avoid or work around the Auto Park feature

Cliff, from Maryland, found out about this just recently. “I was surprised by this just yesterday. Picked up my new 2017 Longhorn last Friday, learning to use everything. I was trying to pull to the very edge of my driveway, so I opened the door to look down. Bang ! Auto-park, truck won't move until you close the door and cycle the gear knob to P and back to R or D. I would really like to disable this.”

An engineer, from Michigan, was quick to explain how to work around the auto park feature on the 2017 Ram 1500. “For parking maneuvers (assuming the truck will creep on its own without throttle input), you should be able to just keep one foot lightly on the brake pedal and thereby avoid auto-Park.”

Grizz, from Canada, says he has been able to lean out of his truck, but always with his foot on the brake. “I do this all the time. I am backing up and the park sense lets me know that I am in the red zone then I pop open the door and back up some more so my truck is not sticking out in the parkade at work. I don't take my foot off the brake as I want to move very slow.”

Presumably, this same approach would work with all of the Fiat-Chrysler vehicles that have the new safety feature.

Panasonic Updates Profit Forecast, Noting How Much Tesla Batteries Help The Jump
2022 Porsche 911 GT3 Laps Nurburgring in 7:04 With Journalist Behind The Wheel
END_OF_DOCUMENT_TOKEN_TO_BE_REPLACED