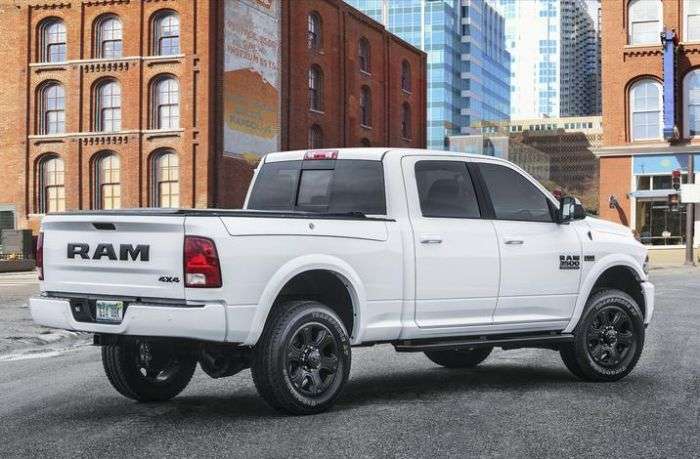 The new owner of a 2018 Ram 2500 Diesel is concerned about the lag in his truck's acceleration.
Advertisement

The owner of a 2018 Ram 2500 diesel is concerned about what he perceives as a lag in the throttle. AMX says he understands that the truck won’t accelerate like his old gasoline powered trucks, but he thinks that something is truly wrong. AMX writes “I have owned my new 2018 2500 Ram Limited diesel for about 2 weeks. I have owned many ram trucks but prior to this but they were all gas engines. I am having trouble getting used to the lack of throttle response when you need it.

We have heavy traffic on my drive to work on the hwy. Having to change lanes now takes some planning as the truck just does not respond like I am used to with the Hemi and 3.92 gears. Do the throttle interfaces out there really work and which one is best?

Once it gets moving, acceleration is fine but the lag for it to respond is just ridiculous. It’s like you hit the gas and it doesn't go for at least couple seconds and by that time, the guy in the next lane I should have not impeded is now right on my bumper. It seems dangerous to me for it to act this way. When I hit the throttle, I want it to go, not think about it for a while and then go.” I’m sure it is scary for AMX especially in a highway situation.

William is the first to make a suggestion. “I know the pedal commander works miracles on the gas. Maybe someone will chime in on the diesels.”

The Throttle Lag Issue Appears to be Well-Known

I find I get the best acceleration from pushing fast to 1/4-1/3 throttle then easing it to 3/4 throttle then to the floor just as you feel the power/acceleration matching your input. You'll get the feel for yours. Just flooring it only lights a fire under the torque management troll. Also your control module may still be programming itself. Mine seems to accelerate pretty quick for highway passing 65-80 mph.”

Cris says the truck absolutely won’t accelerate if you stomp on the gas. “If you’re mashing the throttle and getting no go, it’s probably the torque management system telling the truck you’re trying to break something lol. There was a TSB and flash for earlier years addressing this but seeing you have an 18 this should have been addressed. Try easing into the throttle, hard and steady instead of a quick jolt. I had the same complaint on my 2012 but I bought it with 85k and didn’t care about the warranty so I deleted and tuned it, now the pedal feels a bit less digital.”

Gear, from Connecticut, says the throttle lag is a known problem. “It's a known issue on the new Ram Cummins trucks. It's all related to the emissions stuff. Google search "Ram Cummins dead pedal" and you'll get a lot of reading material.”

AMX doesn’t believe that it is a gear issue. “Gearing doesn't appear to be the issue as it has plenty of torque to deal with the tall gears once the throttle opens. In fact, I think it would be even better with a taller gear like a 3.08 with all the torque this thing has. It’s the reaction time between hitting the gas and the computer responding. It’s like its thinking way too long on what it’s supposed to do. Never experienced that in a gas engine. The other day I had to change lanes quickly. I hit the pedal and it didn't do anything for what seemed like an eternity. By the time the throttle opened and it started to accelerate, the guy in the other lane was right on my tail. I was hoping someone had experience with the throttle sensitivity boosters out there that could share their experience.”

Several Throttle Boosters on the Market

Tide is happy with the change that the boosters have made to his truck. “I have the Pedal Commander on my 2017 and it works great. I'm currently running it on city+4 and haven't experimented with it past that yet. I also previously had a Sprint Booster on my 2014 Silverado and it also worked great. It pretty much feels like the throttle in an old carbureted vehicle now.”

Cris raises an excellent question. “Does the pedal booster void the warranty?”

Tide doesn’t think it affects the warranty. “No it does not. There's absolutely no way that the dealer would know it was ever on the truck. You could completely remove it from the truck without a trace in a matter of minutes before taking it to the dealer. Me personally I would just change the setting closer to that of stock and shove it up under the dash if I was worried about it.”

Ace says the Pedal Commander may be worth a try. “When I went on Pedal Commander’s site, to purchase mine, it showed they also work on the Diesel 6.7 engines. I personally think purchasing a Pedal Commander will be more cost effective, than ordering a chip or having someone write/rewrite the chip in your truck.”

RSG has found a couple of ways to handle the lag. “There are two things causing the lag you are having issue with. I had to make some adjustments myself for the same reasons. Number one is it's a turbo and they have lag, period. Second, these Cummins engines are low-rpm torque BEASTS. Because of that there is a TQ management system keeping all that delicious torque from coming in completely until 3rd gear. That said, there is still lag even when already IN 3rd gear and up. I have made two adjustments for this. One: If I know ahead of time I will be stabbing the throttle I will manually drop a gear to get the rpm's up, then, no issues at all. Two: I purchased a BD throttle sensitivity booster (Another name/brand is the pedal commander) Hope this helps!”

Joe, from Rhode Island, is a firm believer in the Pedal Commander. “I second or third or whatever for the Pedal Commander. Just installed mine in my 18 Rebel...If I was to sum it up in a statement. ITS ALIVE!!! ITS ALIVE!!!! Lol. Best mod/add on I have ever used, 5 mins to install and pops out just as easy. Absolutely 0 throttle lag, the instant you ask for it, wham! You get it.”

Culver, from Washington, says the boosters are definitely worth the investment. “I put the BD on my 2016 and it made a huge difference in throttle response. There are two settings on it 50% and 100%, I went with 100 because 50 didn't seem to do much for it.”

A number of truck owners wonder how the Pedal Commander even works. Joe explains “It eliminates the lag from input to response when you press the gas pedal. It does this by rerouting the input signal through a little device that sits on your dash (or where ever you decide to mount it). And is adjustable depending on how much lag you want to eliminate from mild to extremely volatile. There are 2 plugs at the end of the whip on the pedal commander. You unplug the connector at the top of your gas pedal, plug the appropriate one from the PD into the top of your gas pedal and the other from the PD to the plug coming from your truck. Stick it on your dash with the supplied holder and you are done. Literally 10 mins of your time and you won’t recognize your truck anymore.”

AMX did not indicate what he has decided to do about his throttle lag. Nor did he suggest which of the boosters he is tempted to go with. It will be interesting to see if he does add one and how well it solves his problem.

Todd wrote on April 13, 2018 - 10:32pm Permalink
They call it torque management. Programming in the computer to limit power to protect the transmission. Some of us Cummins owners called it the dead pedal. Drove me nuts and could be very dangerous in certain situations.
Dale wrote on April 13, 2018 - 10:32pm Permalink
A guy I know runs the bd throttle booster on his Cummins and loves it.
Dups wrote on April 16, 2018 - 3:06pm Permalink
Try this trick to program the trucks stock ECU when it is safe to do so on road: by going 40 to 45 miles/h holding the brake with one foot and pressing the gas with the other trying to keep the speed constant when under brake load for about 10 to 15 seconds; you might need to keep transmission in a manual mode at an acceptable gear range. This tricks the ECU to map itself very quickly and give you the best performance it can offer. Be sure you fill up with best quality diesel if you can before this trick. This should increase the throttle response to any turbo vehicle with self learning ECU. I have tried this on my manual Subaru WRX turbo and it worked very well. Hope the same applies to these diesel trucks.
Joel Gerke wrote on July 18, 2018 - 12:14pm Permalink
I own a 2013 Ram 2500 diesel which has the "dead/death pedal" issue. Installed the BD booster set at 100% and the acceleration is amazing however, it does nothing for the dead pedal issue. Taking it to the dealer tomorrow for the T79 recall and I'm going to have them check the dead pedal issue. I've seen on other forums that dealers found DTC error codes and applied updates that fixed the problem.
Jason N wrote on August 30, 2018 - 10:36pm Permalink
I had a 16 3500 with the aisin transmission and air suspension. I loved that truck except for the death pedal issue. I fought with Ram for 2 months with it they wouldn't take it back even though the service guys and service manager said it was unsafe and wouldn't drive it for a weekend. Owned 9 cummins trucks in last 20 years all for towing 15,000-20,000 lbs daily, will never buy a ram again after that truck I simply couldn't drive it safely (had multiply close calls) i lost $20,000 on that truck in 17,000 miles. Bought a power stroke and am way happier than with a Ram the power is incredible compared to a neutered cummins with torque management. Its not cummins fault just Rams that they can't build a trans to hold up.
lee wrote on November 5, 2019 - 2:59pm Permalink
what is the bulletin number from dodge regarding death pesal?