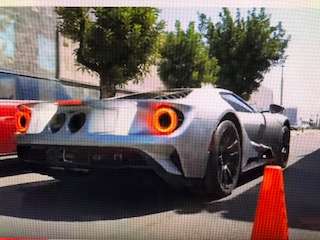 Well-known comedian and car collector, Tim Allen, takes fans for a ride in his brand new 2017 Ford GT. In a You Tube video titled "Meet GT" Allen jokes about the vehicle he says is designed to do just one thing "Go Fast".
Advertisement

The video is also called “An intro to my silver spaceship” and it chronicles the arrival of Tim Allen’s 2017 Ford GT in a car hauler right down to the Michigan license plates. The comedian jokes about his video is over-produced and that the only way to really show off the street rocket is to just drive it.

Allen is known to television audiences as Tim “The Tool Man” Taylor, from Home Improvement, and Mike Baxter, from Last Man Standing. He has also starred in several movies including The Santa Clause. In both of his popular television shows he often talks about his love for cars and big engines.

Allen Grew Up in the Motor City

Tim spent his teen years in the Detroit area and is a true car lover. His private collection includes everything from a 1962 Red Chevy with a 409 engine to a 1933 Ford Roadster that they rebuilt as part of the Home Improvement show. His private garage includes a Cobra 289 and a 1950 Cadillac. He loves fast cars and used to race Mustangs on the race car circuit. He really does love Motor City Muscle.

In the nearly four minute video that he posted to his Facebook site, Tim talks about how smooth the ride is in the GT. He says at one point that the GT “feels like a race car for the street more than anything I’ve ever driven”. He also jokes about the lack of space in the GT saying there really isn’t room for his camera crew, just room for the key fob. He also jokes about his hair.

A true aficionado of speed, Tim Allen describes the 2017 Ford GT as having one function and that is “to Go Fast”.

The 2017 Ford GT is a true supercar. Its carbon-fiber body is designed to be lightweight yet durable. It features a 3.5L EcoBoost® V6 engine with twin turbo chargers that produces 647 horsepower. It has a top speed of 216 mph. Ford puts all buyers through a strict screening process, before allowing someone to purchase the nearly $500,000 vehicle. Ford is currently suing Wrestler John Cena for violating terms of the contract because he immediately sold the supercar rather than keeping it for at least two years. The Ford GTs are relatively rare. The company only plans to build 250 each for 2017 and 2018.

Tim seems to really appreciate the special button on the dash of the 2017 Ford GT that raises the vehicle a little so that you don’t scrape the road while you are driving. He also likes having all of the controls on the wheel, just like other race cars.

Ford has raced the new versions of the GT with strong results. Ford Chip Ganassi Racing has won back-to-back IMSA GTLM titles at the Rolex 24 at Daytona.

For Tim Allen however, it appears the 2017 Ford GT will be a vehicle to drive and appreciate. It is especially nice to see the supercar go to a person who loves cars, speed and American ingenuity.