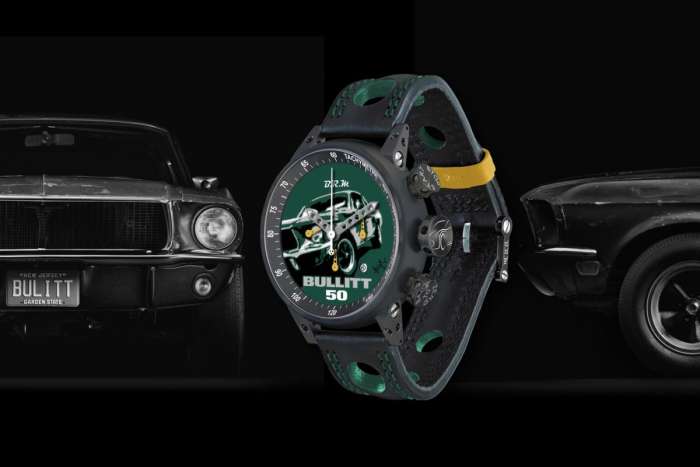 Ford and the owner of the original 1968 Bullitt Mustang are cooperating with the raffle of a unique watch to raise money to fight Parkinson's. The Bullitt 50 Chronograph watch contains a tiny chip of paint from the 1968 Bullitt Mustang.
Advertisement

The owner of the original 1968 Bullitt Mustang is cooperating with chronograph manufacturer BRM and automotive artist Nicolas Hunziker to create a one-of-a-kind watch to honor the 50th anniversary of the classic Bullitt film, and the classic Bullitt 1968 Mustang GT 390. The timepiece, which will contain a tiny chip of paint from the original Bullitt Mustang, will be raffled off to raise money to fight Parkinson’s disease.

The idea for the raffle came from the non-profit Drive Toward a Cure in celebration of the 50th anniversary of Bullitt and to honor the original owner who was challenged by Parkinson’s. Drive Toward a Cure arranged with Sean, BRM and Hunziker to create this offer.

The owner of the original Bullitt, Sean Kiernan, has asked that the proceeds be donated to the Michael J Fox Foundation in memory of Kiernan’s father, Robert, who died from Parkinson’s, in 2014. Tickets for the raffle will be $25 and be sold through Drive Toward a Cure, a non-profit set up to raise money to fight Parkinson’s disease.

According to Kiernan, it’s been a wonderful year of celebration for both his father’s memory and the Bullitt. The car itself was on display SEMA this month and will conclude the year with events on the west coast as well as a showing in January at the Grand National Roadster Show.

Drive Toward a Cure

Capitalizing on the ‘Year of the Bullitt’ and the movie’s 50th anniversary, Pollack joined forces with Frederic Gasser, CEO of the America’s for BRM Chronographes, and longtime industry artist Nicolas Hunziker, to launch a special one-of-a-kind offering. Hunziker, who was already aligned with BRM, is uniquely qualified to hand-paint the famous vehicle on a single chronograph that carries an anticipated value of more than $35,000.

Pollack says only 1968 (the year of the original Bullitt Mustang) of the $25 tickets will be sold, raising just under $50,000 for the Michael J. Fox Foundation.

According to Pollack, the winner of the watch will be announced by Sean Kiernan during the Grand National Roadster Show in Pomona, California on January 27, 2019, where the original Bullitt car will be displayed.

BRM Chronograghes was launches by Bernard Richards in 2003. They are designed to be the ultimate wristwatches for racing enthusiasts. The high end timepieces have been commissioned for Abarth, Corvette Racing, Gulf and others.

More information about the Bullitt 50 Choronograph and the raffle can be found here.