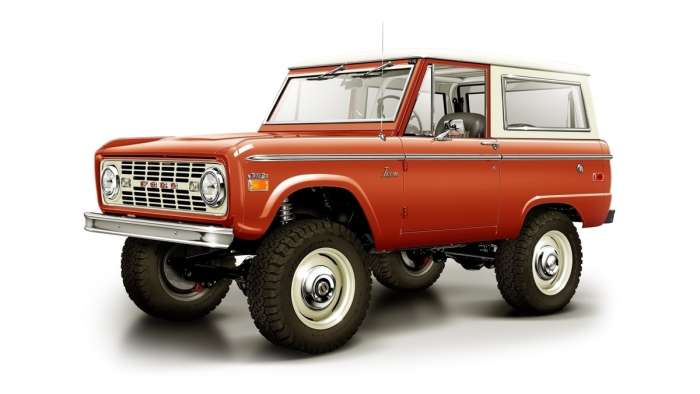 Icon has made a name for itself rebuilding the beloved old style of Ford Bronco. Now it is auctioning off one of its creations to raise money for design students.
Advertisement

Jonathan Ward has built his company, ICON 4x4, and his reputation on being dedicated to rebuilding classic vehicles, but with modern components to improve performance and longevity. ICON started building bespoke Ford Broncos, known as the BR, back in 2011. The company claims there is quite a waiting list, especially now that Ford is promising an all-new 2020 Ford Bronco. Now, ICON is auctioning off a less elaborate version of the beloved Bronco called the “Old School Series of ICON BRs”.

Own A Classic-Looking Ford Bronco

According to ICON, the vehicle that is up for auction will “Feature renowned ICON styling and modern technology but retain original-appearing bodies and bumpers. From the outside, the Old School ICON BR appears to be a well-restored original Bronco, and that aspect shaves several weeks off of the build process compared to fully bespoke/made-to-order ICON BRs.”

ICON is partnering with a company called Autotype to auction off an Old School BR to help support scholarships for design students. BR #63 will be auctioned online with 10 percent of the proceeds going to the Autotype Scholarship Fund to aid students currently enrolled in design schools.

Expensive but Built for Endurance

ICON’s owner Jonathan Ward isn’t kidding about the Broncos being well-restored. His bespoke Bronco BR can run as much as $200,000. It is beautiful, it has classic lines and it will run like the wind, because it has a modern 426-hp Ford 5.0L Coyote V-8 crate engine from the Mustang GT.

ICON 4x4 totally rebuilds the classic Ford Bronco, replacing all plastic or cheap metal parts with new stainless steel, aluminum or pewter parts. The paint scheme is traditional gloss paint and they are retaining the factory bumpers. While the look is “Old School”, the rest of the vehicle is filled with all-new current technology, electronics and mechanical components.

The founder of ICON, Jonathan Ward says they are combining modern technology with classic design. “The idea here was to go far more retro. Now we can afford ourselves the luxury to do something much more stock. I’ve been wanting to evolve in this direction anyway.” Ward is already known for recreating versions of the Toyota FJ and CJ.

Autotype Co-Founder Derek Galkin says, “The Autotype collective searches high and low to identify true designers who are pushing boundaries in our field and pursuing new frontiers for design to flourish; we tell their stories, explore their processes and offer their products online. Our e-commerce site donates 10 percent of all sales to the Autotype Design Scholarship, which invests in future creatives. Partnering with ICON 4x4 to auction an Old School BR is an ideal way to launch our design-community platform.”

The bidding on the one-of-a-kind ICON 4x4 Old School Bronco BR #63 runs through March 15 at 5:00PM PDT. Vehicle will be delivered in late March or early April 2019.

No details were provided about the actual vehicle being auctioned, nor did they give numbers for fuel economy.