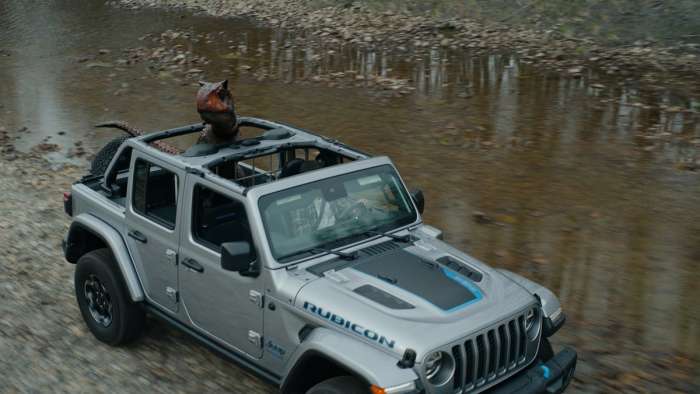 Jeep is launching a new ad campaign featuring its popular 2022 Jeep Wrangler 4xe and the new movie "Jurassic World Dominion". The real star of the ad is a baby Carnotaurus dinosaur that was created especially for this campaign.

The one-minute Jeep commercial imagines life with a dinosaur as a pet. The ad opens with a Jeep Wrangler 4xe owner finding a baby Carnotaurus in his own yard and deciding to take care of it. He takes the baby dinosaur on off-road adventures, switching to electric mode when the dino is napping. His neighbor is horrified when he tries to walk the dinosaur. The imagery ends when he takes his pet camping.

During a video conference about the new campaign, Olivier Francois, the global chief marketing officer for Jeep parent company Stellantis, says the new ad speaks to Jeep’s sense of adventure as well as its evolution in the last few decades. The Jeep vehicles are recurring characters in the Jurassic franchise and part of the narrative. The vehicles have evolved just as Jeep is evolving toward an electric future. Francois could not quantify how the previous movies affected Jeep’s sales but says the connection will definitely affect the ads and the impressions they leave. Francois says that typically viewers only remember ads and the products in them about 60% of the time. He estimates that close to 100% of viewers will remember the ad and connect it to Jeep.

“Almost 30 years ago, moviegoers saw Dr. Ian Malcom escape danger from dinosaurs in the original ‘Jurassic Park’ film while riding in the back seat of a 1992 Jeep Wrangler,” said Olivier Francois, global chief marketing officer, Stellantis. “We paid homage to that iconic scene in the Jeep brand’s 2018 Big Game commercial, which then featured the new Jeep Wrangler, as the next extension of our relationship with Universal Pictures. Here we are now in 2022, and we continue to see the evolution of the Jeep brand around the world with electric plug-ins, including the Jeep Wrangler 4xe and Grand Cherokee 4xe, which are quite literally charged for any adventure, this time with a four-legged passenger of a different kind riding along in the front seat.”

Jeep CEO Christian Meunier would not say if there will be special Jurassic World Dominion Editions of the 2022 Jeep Wrangler 4xe. Meunier says the company is already selling every Wrangler 4xe that it builds. He says the company would build more, but it is hampered by component and battery shortages.

The movie will also feature the Jeep Wrangler, the Jeep Gladiator and a vintage Grand Wagoneer. The commercials will play on television as well as all Jeep social media platforms.

“The Jeep brand has substantially expanded in the three decades since the first appearance of the Wrangler in the original ‘Jurassic Park’ film,” said Christian Meunier, Jeep brand CEO. “We have entered into new SUV segments, we have increased our global production footprint and, with the rollout of our 4xe electrified portfolio that includes the Wrangler 4xe, the Jeep brand is developing the most capable and sustainable 4x4 vehicles in the world, satisfying the needs of our expanding global Jeep community.”