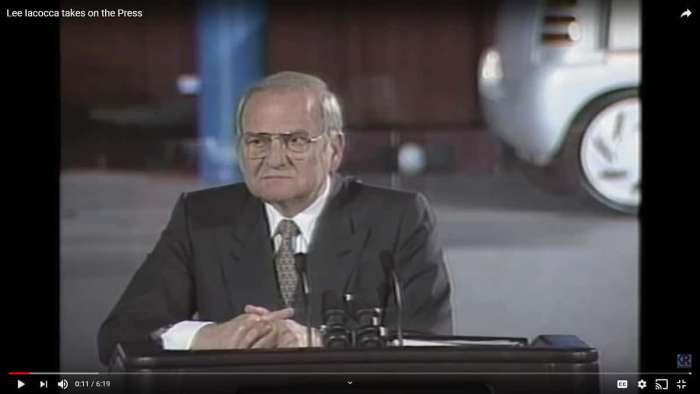 Lee Iacocca - A Giant in the Automotive Industry - Dead at 94

The auto industry has lost a true icon. Lee Iacocca, who helped create the Ford Mustang and went on to save Chrysler from ruin, has died.
Advertisement

The auto industry is filled with colorful characters, but Lido “Lee” Iacocca stands out for his tremendous marketing ability and dedication to the industry. Iacocca is credited for being on the team that created the Ford Mustang, forever changing sporty cars in America. After he tangled with Henry Ford II, Iacocca went to Chrysler Corporation, where he literally saved the company from bankruptcy.

Iacocca has been living in Bel Air, California after leaving the auto industry in the 1990s.

Fiat Chrysler released a statement saying "The Company is saddened by the news of Lee Iacocca's passing. He played a historic role in steering Chrysler through crisis and making it a true competitive force. He was one of the great leaders of our company and the auto industry as a whole. He also played a profound and tireless role on the national stage as a business statesman and philanthropist.

Lee gave us a mindset that still drives us today – one that is characterized by hard work, dedication and grit. We are committed to ensuring that Chrysler, now FCA, is such a company, an example of commitment and respect, known for excellence as well as for its contribution to society. His legacy is the resiliency and unshakeable faith in the future that live on in the men and women of FCA who strive every day to live up to the high standards he set."

Iacocca joined Ford, right out of Princeton, and his marketing skill quickly pushed him up the ladder. He is often referred to as the “father of the Ford Mustang” because he pushed for the launch of the smaller, sportier car in 1964. The Ford Mustang revolutionized the auto industry and created the pony car segment that brought America the Chevrolet Camaro and the Dodge Challenger.

Iacocca eventually became President of Ford but made the mistake of arguing with Henry Ford II. In a clash of egos, the man whose name is on the building always wins. Iacocca was fired in 1978.

Iacocca was hired by Chrysler and engineered the first government loans to save the ailing company. The Chairman and CEO famously taught employees how to spell his name by repeatedly saying “I Am Chairman Of Chrysler Corporation America”. As a reporter, I always spelled his name correctly.

In the 1980s, Iacocca became a household name because he started doing ads guaranteeing the quality of a new Chrysler vehicle called the K car. His tag line was “If you can find a better car, buy it”.

At Chrysler, Iacocca also introduced the minivan, another vehicle that would change the American auto industry. He also oversaw the purchase of American Motors, which brought Jeep into the Chrysler family. Today, Jeep is one of the strongest parts of Fiat Chrysler Automobiles.

Iacocca retired from Chrysler in 1992. He dabbled in other projects including casinos and electric bikes. He also wrote several books on management and leadership.

There are few people that will ever have as big of an effect on an entire industry as Lee Iacocca.

Bill Tullock wrote on July 2, 2019 - 11:07pm Permalink
I had the opportunity to meet Mr. Iacocca back in 1983. The occasion was the burial of his beloved wife Mary at White Chapel Cemetery in Troy, MI. As the PIO for the TYPD, I expressed our condolences on the passing of his wife. In return, he thanked us for providing the police escort for the motorcade. Some years later, I asked a friend of mine (who was an editor for the Detroit News) if he could get Mr. Iacocca to sign my copy of his book. Not only did he sign it, he wrote a nice note acknowledging our earlier meeting and the fact that I had been promoted to Lt. Needless to say, that book and another share a place of respect in my office. I understand that Mr. Iacocca will be buried next to Mary. I know that my TYPD family will show him the respect he's earned. God Bless!