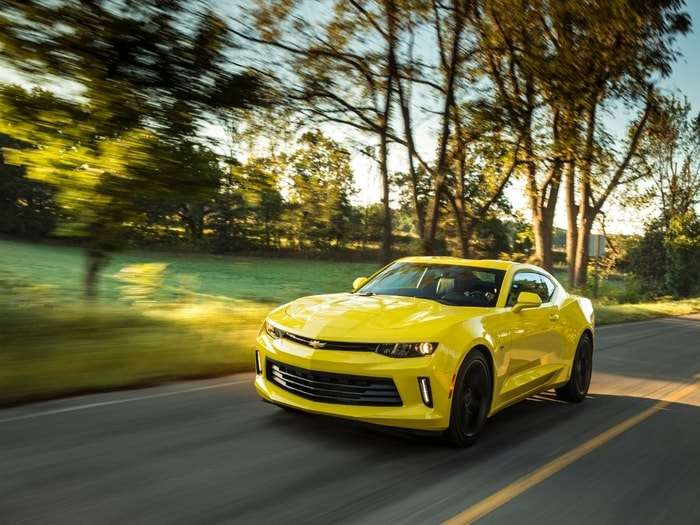 Is the Lack of Advertising Hurting 2018 Chevrolet Camaro Sales?

Fans of the 2018 Camaros are concerned that Chevrolet is not marketing the new 2018 Chevrolet Camaro enough and that is why sales may be suffering.
Advertisement

Zack, from Cleveland Ohio, raised the advertising issue on a popular Camaro forum. Zack is concerned that sales for the 2018 Chevrolet Camaro may be off because the company doesn’t seem to be aggressively marketing the car. Zack says, “I'm watching T.V last night and ANOTHER Kia commercial comes on featuring the Kia Stinger with Emerson Fittipaldi..who raced Formula 1 and Indy cars back in the day.. Really nice commercial..Maybe you've seen it. It angers me that GM doesn't have any commercials featuring the Camaro except for maybe 2, but even then they have a brief 1 second glimpse of it while they show off 3 other cars. You have a badazz ride, LT, 2SS, ZL1, ZL1-1LE doesn't matter. GM did a masterful job with this car. A+ in my book, Technology and performance. Advertising maybe a "D" for a grade. I see the Camaro only sold something like 3800 units for the month of February. I'm just disappointed that GM doesn't market this car.”

Hobbs, is tired of the Chevrolet ads that he has been seeing. “GM’s marketing is pretty terrible anyways. I’m sick of seeing those “real people” commercials. They probably stop more sales than the gain.”

I had to clean up what Guitar posted. He comments about millennials who don’t care about muscle cars. “A great car sells itself anyway. How many Corvette commercials do you see? And by the way, not sure you're aware of the generation we live in but, no one wants cars, especially sporty, powerful, gas guzzling cars. We live in a world of p#%#@ that uber and want ECO-friendly cars.”

RC has a more personal take on it. “I selfishly prefer that GM only sell enough Camaros to keep them in production, and no more! I don't want everyone else driving something like me! Haha”

Woody, from Colorado, gets in another dig about the current advertising campaign. “Don't forget about all those J D Power awards. That seems to be all Chevy cares to market anymore. Their awards.”

KSA, from Arizona, points out that it is all about what is currently selling. Pickups and SUVs are the big profit centers right now, and that appears to be what Chevrolet is advertising. “The market is working on trucks and SUV's as they are the biggest sellers, thus the competion. Light truck and SUV are most likely double that of car/sedan sales. The only real "car" sales continue to be Camery's and Accords. Like someone said, no need to have commercials for Corvettes - those that want these types of vehicles (like ours) are not swayed by competitive commercials and already know what we want.”

Kdeja, from Chicago, just bought a 2018 Chevrolet Camaro. “With regards to marketing, it's all about return on your advertising dollars spent. Push and promote the products that make you the most money. Camaros are great, but they're only a small contributor to keeping the lights on. Thankfully they're building them!”

Street, from Minnesota, is concerned that Chevrolet will lose ground to its pony car competitors. “I worry GM is going to lose market share to Dodge Challenger unless they step up their marketing efforts for their Camaro/Corvette. There is a new generation of drivers every year, "x"% will like muscle/sports cars, and of the % it will be split between FCA/Ford/GM and others. Once folks make up their mind, often times they stick with it. Marketing is so much more than TV commercials, Internet, YouTUBE videos, sponsorships, movies (who remembers Transformers!), music videos, etc.”

The TorqueNews Managing Editor, Patrick Rall, just did an article last week about the February sales numbers. Not only did the Challenger beat the Mustang and the Camaro, but the Challenger is trending toward higher sales.
According to Rall, “In February 2018, Dodge sold 6,093 examples of the Challenger. That is 14 less units than they sold in the same month last year, but it is 2,600+ units better than January 2018. Ford sold 5,800 Mustangs and Chevrolet sold 3,680 Camaros – both of which are up compared to January, but with the Challenger growing from month to month by the largest margin, the Dodge muscle led the segment in February 2018 sales.”

Zack adds that having the 2018 Chevrolet Camaro compete in NASCAR is great marketing. “In order to be #1 in sales you can't leave any stone unturned. Not all advertising, marketing, youtube videos, social media will sell cars. But you have to be relentless when selling your product. You have to utilize every single means to sell. Now having the ZL1 in the nascar series is HUGE! And maybe that’s what GM was and is banking on. Now that the Daytona 500 is over and kicks off the nascar season it will be interesting to see where Camaro sales stands come may/june/july...Long Live the Camaro!”

Chris, from Houston, sums up the advertising dilemma perfectly. It is all about getting the biggest bang for your buck. “Cars like the Camaro and the Corvette are profitable and they do want to sell as many as they can. However, the real competition for GM is in the "normal car" segment. They probably sell 8-10 Malibu or Cruze for every Camaro or Corvette they sell, heck, probably a lot more than that. Their bread is buttered by the commuter car, crossover, and truck line, and that is where they spend their money, because the competition for that dollar is fierce.”

Cell, from California, makes a great point. “I wish they'd market it more so it sold more and didn't get cancelled again.”

The lack of advertising right now really points to where the profit centers are. Sports cars are niche vehicles and the big profits are coming from pickups and SUVs. It is important for automakers to have performance and halo cars to keep their high horsepower credentials, but aficionados know what they want and may not be swayed by ads.

Als wrote on March 6, 2018 - 8:05am Permalink
I call BS on lack of sales due to lack of advertising. Hard to get people to buy a vehicle when it’s so hard to see out of the vehicle. The Camaro is just not a comfortable car to drive or to be a passenger.
Steve wrote on March 7, 2018 - 9:03am Permalink
Well - it certainly can't hurt, GM seems to follow the strategy "build it and they will come" and it doesn't seem to be working. With higher volume cars like the Mustang and Challenger, people see them on the streets if they aren't in commercials. Good aAdvertisement also tells people a company has confidence in their vehicles, lack of advertisement says the opposite. Look at some of the advertising Ford does for the Mustang, all their cars. The GT350 commercials are awesome, and communicate that Ford believes that car is the end all, when you're buyers are mostly loyal fans anyway, that is the train of thought that needs to be tapped "this is the best one yet..." The recent commercial that has all the Ford performance line up in a one-lap race, was brilliant. Not to get off topic however - they had the race spec GT in there but not the GT4 Mustang?? Never mind, yes I agree that GM ought be advertising the Camaro more, I hear the sheet metal on the 2019 Camaro will be new - GM ought be teasing that now...just like Ford would. Why does GM do this? Well because the government bailed them out and they don't live with fear like the people at Ford do. The people at Ford saved themselves and had a rough time, are making due with debt GM doesn't have, without the surplus GM has, and for that reason Ford follows proven methodologies.
carguy12 wrote on April 7, 2018 - 12:26pm Permalink
Real world problems with GM cars have been under reported for years. It's probably catching up with them, especially in the case of Camaro and Corvette. High prices that by no means ensures years of trouble free service. The various forums are filled with unbelievable problems with drive trains and electronics. Flashy looking junk.
Mike wrote on May 6, 2018 - 5:13pm Permalink
Hobbs nails it. Dodge markets the Hellcat and Demon Challengers in a no holds barred barrage of fire and fury. They are aspirational cars that make many people want to be someone they're not or can't be 90% of the time in a world that is becoming more of a theme park every single day. They make you want to run wild in the streets with Vin Diesel. Chevy markets the Camaro, like the rest of their cars, to perfectly respectable people who live perfectly respectable lives as a perfectly safe and responsible sports car, and gosh, these perfectly respectable people in this focus group like it so your family should, too, because JD Power! And look, we have a convertible! The Mustang appeals to lemmings and teenagers because it's cheap but it is looking more like an old Electrolux canister vacuum every day rather than anything resembling its heritage, so screw that.