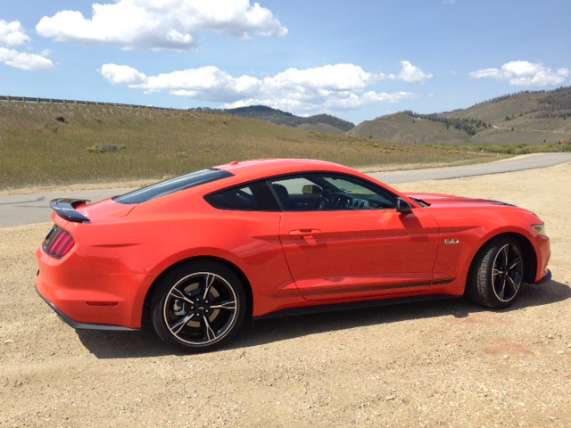 If you are buying a new Ford Mustang on a budget, which is better: The V-6 or the Ecoboost Turbo?

A Ford Mustang customer asks the question, "Which is better the V-6 or the Ecoboost Turbo?" Fans replied with a number of different opinions. The most surprising thing is the difference in interiors available with those engine options.
Advertisement

The person asking the question says the new Ford Mustang would be their daily driver except for the worst winter days, in Illinois. They said that it is only a five minute drive to work and they couldn’t afford the GT but really wanted a 2016 or 2017. Mustang fans seem to appreciate the buyer’s problem and say “It’s all about the interiors.”

A Mustang fan named Steve points out that “The V6 models only come in base trim so all you'll get is the cloth interior. You'll have to go Ecoboost at a minimum to get the premium trim and leather interior. There are certain options you can only get on the premium trim. If any of those things are on your must have list, then the Ecoboost or GT will be required.”

A Mustang driver from Michigan adds “If you want "creature comforts" for your daily drive, then get the Ecoboost. You can't get the interior upgrade on the V6. I am not sure if you even get heated seats with the V6.”

An Oklahoma driver says “Personally, if I had to choose between the V-6 or the I-4 EcoBoost, I'd take the I-4. Lighter, better performance, and better fuel economy. Also, if you are into performance modifications the I-4 will be better too.”

Another driver from Michigan is concerned about the long term viability of the ecoboost technology “I would go with v-6.Not sold on the long term ecoboost.”

Torque News Managing Editor Patrick Rall finds the Ecoboost engine is the best option in this scenario. He says “I would choose the EcoBoost without a second thought. The EcoBoost 4-cylinder costs $1,000 more, but it makes the car far more fun to drive and far more efficient. Plus, the EcoBoost models have more available options than the V6 models, so if you want premium interior features - for example - you have to go with the EcoBoost. Ultimately, anyone who drives the V6 and the EcoBoost back to back will find the turbocharged 4-cylinder to be the better choice.”

In the end, it all comes down to what the driver can really afford. The Ecoboost is an upcharge, but the savings in gas mileage will help offset the price. The buyer needs to ask himself about the necessity of some of those premium options. If it really is a daily driver, the possibility of leather or heated seats in the winter may seal the deal.