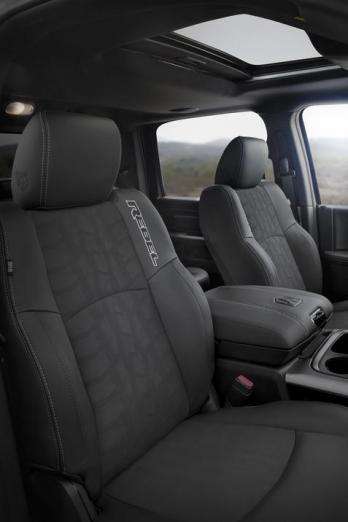 A new owner of a 2017 Ram 1500 asks for help removing the adhesive from the sticker left behind on the visor of his truck.Adhesives can be stubborn and you don't want to remove the color from the upholstery.
Advertisement

It seems nowadays that some of the stickers placed on the interior of new trucks are meant to last the life of the truck. Once you peel off the warning labels or advisories, there is often a nasty adhesive residue left behind. Press reached out to members of a popular Ram forum for advice on cleaning up his 2017 Ram 1500. “I peeled off the warning labels on my visors and it left a little adhesive behind. Anyone have the remedy to remove what's left behind?”

There are some tried and true methods for removing some of the stickier goo. One method is decades old. That suggestion is to wet a cloth with white vinegar and gently rub the offending adhesive until it comes off. White vinegar can be used on virtually anything and you don’t have to worry about it taking the color out of the fabric.

Other members of the forum have their own suggestions. Chopper says, “WD-40, paper towel and some patience.”
Trick responded, “The WD-40 will work. Soak a rag and let it sit a min or 2 and wipe it off. Then clean the WD-40 off with some window cleaner or soap and water.”

There is a product made specifically to remove left over adhesive and similar residue. It is called “Goo Gone”. It is designed to remove any residue, especially on leather and fabric. I have used it extensively and it works very well.
Press tried it for his visors. “I used some goo gone let it soak in for a minute wiped with a cloth then scrubbed with soapy water and dried with a hair dryer and it seemed to work in the little spot I tested it on so I will try the rest of it later. Still open to ideas though.”

One owner reminded Press to take off the sun visor to work on it and make his life a lot easier. Another driver suggested “Steam it and use a microfiber towel and smudge out the adhesive. Let it dry, rinse and repeat until done.”
Don’t be worried that removing the stickers will void your warranty. That is an old wive’s tale.

Not worth the risk

One driver suggested that Press use pure acetone or the weaker version known as nail polish remover. I would avoid that at all costs unless you know that your material is colorfast. Acetone and nail polish remover are very strong and may strip the color right out as well as damage the fabric.

Again, be very careful about ever using straight acetone. Once you have removed the color from upholstery or fabric, there is no going back. There is a reason that someone created “Goo Gone!”