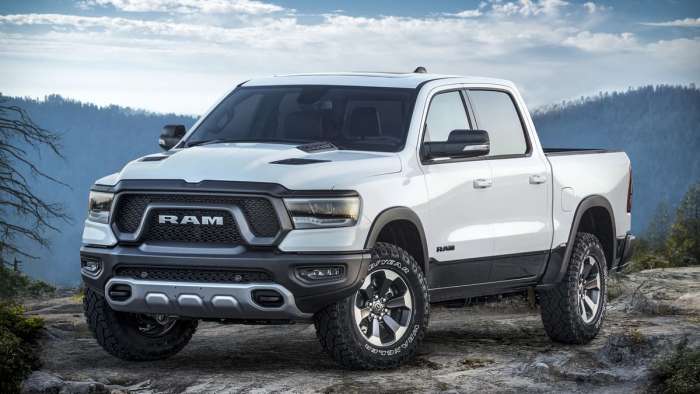 Sales figures show that Ram placed second in the pickup truck wars. Now, can the upstart keep up the pace in 2020?
Advertisement

The 2019 Ram pickup managed to unseat the 2019 Chevrolet Silverado as the second best-selling pickup brand for 2019. Ram has had phenomenal success with the 2019 Ram 1500. The company has also built on that success by adding a classic version and the strategy has led to a historic change in sales numbers. The Ford F-Series has been the best-selling vehicle for decades and that is expected to continue when Ford releases its sales figures tomorrow.

I wrote earlier in the year that the 40-day UAW strike against General Motors might cause Chevrolet to lose the number two position. Without the walkout, the two brands may have ended up neck and neck. It is also important to point out that General Motors still sells more pickups when you add the 2019 Chevrolet Silverado and 2019 GMC Sierra numbers together.

Now for the numbers. According to the Ram, the company had a record setting year. Ram pickup truck sales were up an astonishing 18 percent to a record of 633,694 vehicles. Ram does not break down the actual sales of 1500s versus the larger or heavy-duty pickups. Ram’s total sales, including the ProMaster vans, also broke records at 703,023. The ProMaster’s sales were up 21 percent due in large part to companies, like Amazon and Fluid, needing the vans for deliveries.

"These results underscore two significant decisions we have made when it comes to Ram – invest in technology and adopt a three-truck strategy," said Reid Bigland, Head of Ram and U.S. Sales. "It has taken some hard work, but it has been a true reward to see how Ram has evolved over the past 10 years."

Chevrolet says it delivered 575,600 of its 2019 Silverados, off slightly from 2018, due in large part to the strike. According to General Motors, “Combined sales of the Chevrolet Silverado and the GMC Sierra were strong, totaling 802,962 pickups in 2019.”

General Motors commented on how the strike affected the sales figures. “Fourth quarter North American wholesales declined an estimated 25 percent year over year, due to the 40 day United Auto Workers work stoppage. This includes the company’s newly launched heavy-duty full-size pickups, which were off approximately 17 percent.” A loss of 17 percent is hard to offset, especially when it falls so late in the year.

Giving Ram its Due

The 2019 Ram 1500 didn’t win just because of the strike, although that gave Ram a huge opportunity. The Ram 1500 has probably won more awards than any other vehicle in history. The 2019 Ram 1500 won the North American International Auto Show Truck of the Year, as well as Motor Trend Truck of the Year because of its redesign. Automotive interior designers seriously upgraded the interior, using better leather and more wood, making the vehicle appear more luxurious. The company also added more technology, upgrading the center screen to a 12” touchscreen, making it easier to see and more user friendly. Cameras give the driver the ability to see all the way around the truck.
Ram also added more leg-room and gave the rear seats the ability to recline. Ram also added more storage inside the vehicle.

While Ram was debuting a redesigned Ram 1500, Ram also seized on the ability to sell brand-new trucks, with the previous design, under the name 2019 Ram 1500 Classic. Ram doesn’t say how many of the Classic were sold but there were enough to keep the plants running full-steam through-out the year. It was a brilliant way to keep producing and selling profitable trucks, even though the Classics were slightly less expensive than the all-new vehicles. It was a gamble that obviously paid off.

Ram has recently given its Heavy-Duty Rams a similar interior upgrade. It will be interesting to see how the sales of the Ram Heavy Duty trucks compare to the Silverado and GMC versions, after their disappointing debuts. Ram is also heavily promoting its third generation EcoDiesel engines that are available in the 2020 Ram 1500. Ram is making the engine available across all of its trim levels.

It is important to remember that General Motors still sells more pickups than the Ram brand, but this is still a huge feather in Ram’s cap. It just makes the pickup truck wars all the more interesting to watch.