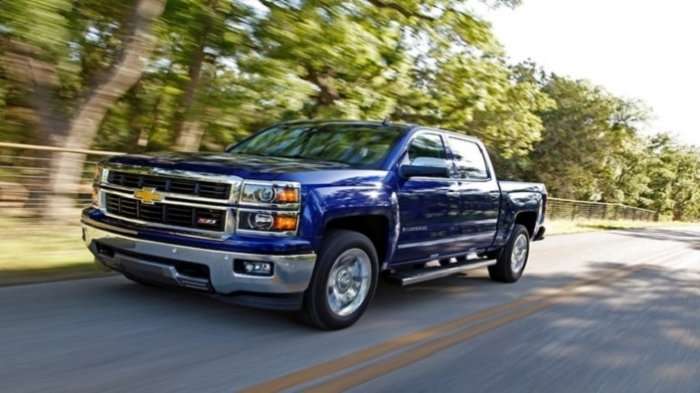 The National Highway Traffic Safety Administration says that General Motors has agreed to recall nearly 800,000 2014 Chevrolet Silverados and GMC Sierras worldwide. The recall affects 2014 model year trucks. According to NHTSA, the trucks may lose the power steering and cause drivers to lose control of the vehicle.

According to the NHTSA report “General Motors has decided that a defect which relates to motor vehicle safety exists in certain 2014 model year Chevrolet Silverado LD and GMC Sierra LD vehicles. These vehicles may experience a temporary loss of electric power steering (EPS) assist followed by a sudden return of EPS assist, particularly during low-speed turning maneuvers. The loss and sudden return of EPS assist typically happens within a 1 second period and is caused by an electrical software issue.”

The report sums up the danger to the driver this way. “If EPS assist is lost and suddenly returned, the driver could lose temporary control of the steering wheel, increasing the risk of a crash.”

The problem is apparently caused by a dip in voltage. According to GM, “Events that demand high current, such as low speed turns, can cause temporary low voltage conditions. When the system voltage drops below 8.8 volts for more than 1 second—e.g., during low-speed turns—EPS assist is disabled until voltage returns to 9 volts for a minimum of 40 milliseconds, at which point EPS assist returns.”

General Motors has not yet detailed when owners will be notified of the recall or when the repairs can be scheduled. However, they say the problem can be fixed by a simple reflashing of the computer system with an update. “Dealers will perform a reflash of the EPS module software. Pursuant to 577.11, GM will provide reimbursement to owners for repairs according to the plan submitted on May 19, 2017.”

After the reflash, The EPS module will no longer draw the higher energy and trigger problems in the system. The Chevrolet Silverados and GMC Sierras built from now on will have the recalibrated software.

The 2014 Chevrolet Silverados and GMC Sierras have had other complaints. I have written a number of articles about problems with the air conditioning in those vehicles. Hundreds, if not thousands of owners have complained of problems with the condensers failing. Demands for a recall have gone unanswered because technically air conditioning failure is not a safety risk. The repairs are expensive, well over $1000, and the parts are backordered for months.

GM has had other complaints about steering problems as well on its trucks. A number of owners of the 2016 Chevrolet Silverado 2500 HD complain that the steering is loose or wanders. Chevrolet has issued a Technical Service Bulletin about it, but owners say it doesn't fix the problem. That defect is apparently tied to a leak in the steering box.