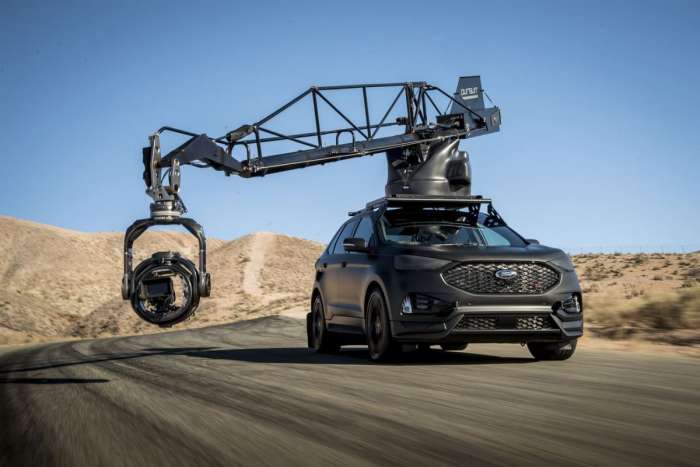 The 2019 Edge ST is the first SUV from Ford’s performance team. It is fast enough and powerful enough to keep ahead of all the action. Plus, the SUV is large enough to be able to hold a film director, crew and all the equipment.

Ford vehicles are commonly used in films and television shows. The Ford Mustang is one of the most popular vehicles in both film and T.V. It is not just the Bullitt and Eleanor, check out most movies or television shows and there is usually a Ford there somewhere. Now Ford wants to be involved in recording all of the action. Pursuit Systems specializes in rigging vehicles to accommodate what film crews need. Together, Ford and Pursuit have built an Edge ST camera vehicle, designed to film high-speed chase scenes and other tricky action footage for movies or commercial projects.

Camera vehicles have to be high-performance, capable of keeping ahead of the action with smooth cornering and acceleration. The vehicles may have to travel over 100 mph, with great handling and safe and efficient braking.
The camera vehicles have to be able to support a huge roof mounted crane that can weigh up to 1,000 pounds. Plus, it helps if the vehicle is large enough to carry a film crew, and extra equipment.

Pursuit sent a team to work with Ford Performance and check out the possibilities of using the 2019 Ford Edge ST. According to Ford, Pursuit was impressed with the Edge ST because of its “Specially tuned, twin-turbocharged 2.7-liter EcoBoost® V6 engine, ST performance brake system, quick-shifting 8-speed transmission and selectable traction control – all made available in a roomy midsize SUV package.”

“Speed, acceleration, braking, handling, even roominess – Edge ST has it all,” said Mike Johnson, racer, stunt driver and Pursuit Systems president and CEO. “Our shoots often demand a lot of the equipment we use, and especially the vehicles. In every way, Edge ST measures up.”

Converting the 2019 Edge ST into a Camera Vehicle

Transforming the 2019 Edge ST into a camera vehicle meant adding structural support to its roof to accommodate equipment, including the nearly 1,000-pound Pursuit Arm. This arm, typically equipped with a gyro-stabilized remote-control camera, can extend far away from the vehicle, giving filmmakers the ability to capture unique angles of high-speed action.

The conversion team also had to retune the twin-turbo 2.7-liter EcoBoost engine to counter the weight of the crane and other film equipment. They also had to add individual-wheel air suspension to manage the weight increase.
It was especially important that the team added a roll cage to protect passengers. The team gutted the interior to accommodate film equipment.

The engineers added extra electrical wiring for video monitors so crew members can see footage in real-time. They also wrapped the exterior in matte black vinyl so it doesn’t reflect in other vehicles.

“We’ve never done anything like this before with an SUV because there’s never been an SUV like Edge ST in our showroom,” said Mark Grueber, Ford SUV marketing manager. “It has the performance chops and utility to keep up with fast-paced moviemaking.”

According to Ford, this one-of-a-kind Edge ST camera car will join the Pursuit Systems stable of high-performance vehicles, taking its place along camera cars converted from a BMW X5 M, Porsche Cayenne Turbo and a Mercedes-Benz ML63 AMG. Pursuit plans to use it in future film and commercial projects.

The 2019 Edge ST is already available in some dealer showrooms. You can see how it compares to the other Ford Edge models here.