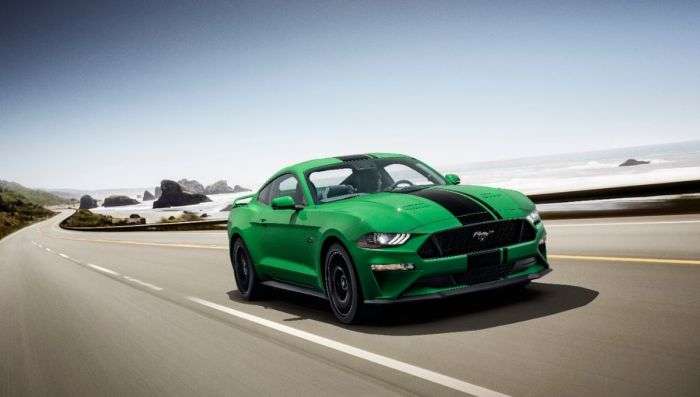 Ford is debuting a new shade of green on its 2019 Ford Mustang. Some aficionados love it, others say that it is too "John Deere" green.
Advertisement

Topnotch started the conversation on a popular Mustang forum by posting the official Ford press release. The “Need for Green” color will debut on the 2019 Ford Mustang. Ford describes the color as bold, vibrant, confident and youthful.

Turbo, who drives an ’05 Mustang says, “Without having seen it in person (obviously)....I like it.”

Eclipse agrees. “Must admit I do like the look of that.”

Nothing Subtle About this Green

Zele likes his color scheme darker. Think I enjoy Highland Green a bit more, but I'm a sucker when it comes to the dark metallics. Not fun to clean though.”

Coupe posted a picture of a John Deer tractor as his comment on the color and several others joined in on the joke.

Bullitt is on the fence about the color. “It's growing on me fast, but still love my DHG.”

550 has already seen the color in the wild and likes it very much. “Quick walk around of one of the #needforgreen Mustangs. Definitely my favorite 2019 color.”

Cardude makes a great point. He says that the color is difficult to capture in a photo and computer graphics probably don’t do it justice. “Need to see it in person. Not ruling it out. But it needs to live up to the bar of “Got to Have It” green.

Mustang 12 says he just can’t warm up to it. “Based on that picture I’m a no- and I like cars in colors that pop (I think grey mustangs should be outlawed as a crime against humanity). But to my eyes that green (obviously I need to see a real car in it) just screams Mopar and would look great on a Challenger/Cuda. I strongly associate (and love) Grabber Blue with Ford just as I see Mopar in that green.”

TruBlu doesn’t like it either. “I dig the "Grabber Green" version for sure. The Granny Smith version at the top of this thread - not so much.”

Mo, likes it enough to consider changing his plans. “I was going to buy a new Bullitt, mainly for the DHG, but this may stop me.”

Nere says it does resemble the color in the pictures, despite what the doubters believe. “It looks pretty much exactly like that in person. I'd love to see a 350 or 350R in this color with a black roof and no stripes.”

Tomcat says the color is definitely memorable. “Definitely a polarizing color, but if you don't want to blend in with every white/black/grey/silver car on the road and even red and blue are too boring, this will work for you. Part of me likes it, but I live in a small town and I know this will result in a lot of "hey I saw you down at ____".

And Tomcat is correct. Everyone will remember where the saw the car especially if there aren’t that many of them.
Rizzle says that you definitely have to want to stand out to drive the new green. “It definitely looks way better in the sunlight in a video. Probably still too much "pop" for me... as in getting popped by the radar guns and drawing way too much attention! Competition Orange was a stretch and I almost got one but 2016 was the last year. So I got a Lightning Blue 2017. But Orange Fury, Spinel Green or Grabber Blue are little too much for me.” Spinel Green was the original name for the color.

Earl makes another John Deere joke. “Nice. I like it. The "Billy Bob Loves Charlene" edition. 3 foot tall emblems.” That is a reference to the country song “John Deere Green.”

Martin doesn’t appear to be a fan of the new color. “My favorite green is British Racing Green. Next best: Guard”
Carguy chimes in, “Somebody said this probably won't age well. I'm inclined to agree. Then again, I've never been much for green cars that don't have Bullitt or leaping cat badges on them.”

Thirteen has a green car, but doesn’t like this shade. “I love a good green, but this is a bit too bright imho.”

S550 already drives the Guard Green 2015 Mustang. He is sold on the new hue. “Think I would take this color over the Bullitt green. BTW, the green Mopar used was called chartreuse. Lighter with a bit more yellow in it. This color rocks!”

Fidex has a 2018 Orange Fury Mustang and likes the new green. “Do you guys think this is a tri-color option? If price options come out and there is a 400-700 up charge for this color, it may mean it is tri-color. Hardly anyone notices that my orange fury has metallic flake until the sun actually comes out and even then, it's not obvious like it would be on a black car. I think that would be a good thing to have on this color, it would make it look lighter in the sun and darker in the shade, really like the effect it has on my OF.” Unfortunately, “Need for Green” does not appear to be a metal flake paint.

The “Need for Green” 2019 Ford Mustang will be available late this summer. The color is supposed to be an attention grabber and definitely aimed at the young, confident driver who wants to be noticed. It will be interesting to see what sells better. I would put money on the “Velocity Blue” color that is also supposed to debut about the same time.