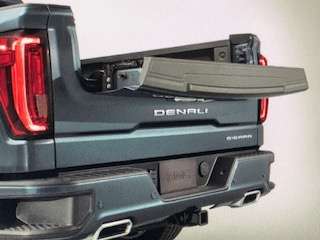 It is called the MultiPro Tailgate and it has six unique functions and positions, giving the driver easier access to the truck bed, as well as a standing workstation. The new MultiPro Tailgate also includes a step and an assist handle to help make it easier to get in and out of the truck bed. GMC truck fans weigh in on the usefulness of the new tailgate.
Advertisement

Perian started the discussion about the 2019 GMC Sierra Denali’s new feature. He says “Just when you think there is absolutely nothing that has not been covered in the pickup truck business. That should be a Denali only feature. People will pay...people will pay.”

Perian is correct. I think the idea of a tailgate that folds down to give you a surface to work on is brilliant. The height is better. It makes getting into the bed more convenient. I imagine it is expensive but the option will spread to Chevrolet Silverados eventually.

Borg, from Michigan, is upset that it will only be offered on the more expensive models. “There are so many great features in the bed of this truck, but only the high-trim models offer these utilities which seems to be counter-intuitive. It's going to be a great upsell but what about all of the other trucks used for real work?”

Stop, from Tennessee, likes the design. “Kinda makes the Ford step look like a one-trick pony. The multi-use tailgate would probably get more use than the four wheel drive system on a Denali.”

Chev 28, from Ohio, likes the idea that the tailgate is strong enough to stop what you have loaded into the cargo area from moving around. “To me the thing I'd use the most is the load stop. It would be nice if they could just offer that part on the Chevy, that thing is pretty genius.”

Critical thinks it will be very popular. “Top trim buyers who pop for all the toys will LOVE this and be demonstrating it at the country club. I suspect that one you start to use it, it will be addictive and wonder how you ever got along without it.”

Rasmus was skeptical at first. “I initially thought it was a dumb idea. It looks useful for some tasks though. If those tasks are important to you then it’s worthwhile, otherwise, meh.. I can’t see people buying because of it, but I bet they use it and it becomes a feature they like.”

Bball agrees that the tailgate will become very popular. “Just like keyless start!!! It becomes an answer to a question few people asked but once you like it, you want it.”

Captain, from Michigan, sees the new design as something other automakers may end up copying. “I do like how the various auto companies come out with new stuff like this, it gets copied (or not) by others, and improved upon. Sometimes there are great ideas out there that we just didn't know we wanted. Then somebody builds them, and now we can't imagine vehicles without it! And some turn out to be not worthwhile. I've always felt that the bumper-corner step out did Ford's assist feature. Simple, robust, no added cost, and you can use it with the gate up or down. This new tailgate offers some further goodies....not always needed, but they COULD come in handy. I can see this GMC lift gate becoming an industry-wide "thing to copy", BUT, only if it is very robust, and not very pricey.”

Is the Tailgate Useful or a Gimmick

American isn’t convinced that the design will catch on. “Possibly useful. Definitely gimmicky. Not sure if it will be here in 5 years.”

Case, from Idaho, says the tailgate will take some getting used to. “I would not want to be the first one to back into something with the tail gate down, or forget to drop the tailgate while unhooking your fifth wheel trailer. Lastly hopefully they will be hard to steal. I have no idea what that tailgate will cost but I bet it is a way too much.” All of those will be expensive lessons.

GTP has an interesting take on the new design. “Reminds me of a Swiss Army knife, overall useful to have but some tools are rarely used; however you are grateful that once in a decade time you need that tool. I can see guys who type up quotes using the computer thing, otherwise most other people, such as myself, wouldn't use it much, if ever. Definitely a marketing aspect, same as all the gizmo's in an S Class - they help sell it even though some gizmos may never be used. Gimmicks for some, useful for others. This tailgate will be on luxury vehicles, luxury vehicles are expected to be excessive. Just like the carbon fiber bed, not necessary but a luxury.”

Truckman, from Texas, uses his vehicle all the time. “I don't see much use in the load stop feature. Like others have said, being at a fixed length doesn't make it versatile enough. But I do really like the ability to get closer to the bed by dropping the top down. I see this being the biggest use for me. I rarely walk into my bed, and the bumper steps are great for that, but I do reach in all the time. I wonder how many of these will have dings in them after one year from banging into trailer hitches?”

Critical believes this will be a real driver for sales. “GMC is no doubt counting on this being an initial high want that will eventually gravitate to a "must have".”

WaterBoy raises an interesting question. “I think this has some pretty cool features. Good on GM for giving it a go. We'll see, I guess, how it is accepted by customers, and its longevity. The only worry I have, being in the area it is with that constant negative pressure, will the salt and grit from the roads be able to creep in there and possibly bugger up the internals of it?”

Captain follows up on WaterBoy’s question, “A good question. As I mentioned, this feature needs to be robust, inexpensive,and (as you stated) maintain its functionality over the life of the vehicle. If it does, expect to see these things everywhere.”

Captain really hits at the bottom line. If GMC has been able to develop a multi-function tailgate, that isn’t crazily expensive, you can expect to see them eventually spread to the Chevrolets. They will also be copied by every other truck maker. I remember when Chevrolet debuted their tumbling seats in their SUVs. Competitors truly tried to rip the seats out of the vehicles on display at the Detroit Auto Show as they tried to figure out how Chevrolet had designed them. Innovation is expensive and this new tailgate could be a great draw.

New England wrote on March 15, 2018 - 12:04pm Permalink
This is only a test. This is a Denali, a luxury truck, not a real work man truck. So these tail gates will have limited use. But enough so that GM will find out what needs to be addressed before its released to the real working truck fleets. It's easier to repair a few hundred fancy tailgates under warranty that thousands of them. GM is in business to make money. So you can be sure if it does, it will quickly flow down.
Benjamin Franklin wrote on October 11, 2018 - 12:09am Permalink
I would love to know when the idea for this design was introduced, and by whom. I have a multiposition gate on my utility trailer, much more simplistic, with photo and dates. It was still in the test stage but worked well. It wouldn't surprise me if certain relatives shared the info.
Darla wrote on January 13, 2019 - 1:45pm Permalink
Finally... I thought this was needed years ago. I could not get into my 05 Avalanche truck bed without a ladder..best tailgate going. Tell me, it was a woman, about 5' tall who designed it!! Right? Just kidding, now I have a few other suggestions...........
Wally1 wrote on March 5, 2019 - 6:02pm Permalink
Yet another gimmick toy for the urban truck owner, not so much to people in rural areas where people actual use the truck for hauling. I want to see this tailgate after the first time a pallet of feed or concrete is shoved in the bed across the tailgate by a forklift. What would make me happy is GM actually making a metal tailgate handle that doesn't break when you pull on it in the cold. But neither GM, Ford or Ram makes a strong tailgate anymore.
Chap wrote on April 9, 2019 - 8:51pm Permalink
Looks cheap and like a failure waiting to happen. Would not buy.
Simon wrote on September 9, 2019 - 3:15pm Permalink
It always took a real man to jump up in the back of his pickup truck. I call the new tailgate being advertised Fat Gate because a person is over weigh or out of shape to jump up in the back of his truck. It is what it is!