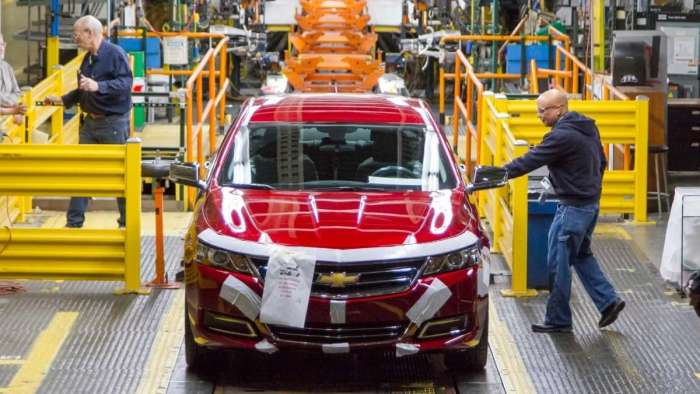 End of an Era as General Motors Moves Toward More EVs

The last internal combustion vehicle rolled off the line at a GM plant this morning. Chevrolet is ending production of its iconic Impala sedan as the plant switches to building only electric vehicles.
Advertisement

General Motors and Chevrolet are saying goodbye to one of the company’s most iconic vehicles. The last 2020 Chevrolet Impala rolled off the line, at 8:30 a.m., today, at the Detroit-Hamtramck Assembly Plant. Not only was it the last Chevrolet Impala, it was also the last internal combustion vehicle to be built at the plant. The facility known affectionately as D-Ham will now go through an extensive retooling. When it returns to production, the plant is expected to be 100 percent devoted to battery electric vehicles.

Chevrolet has sold nearly 17 million of the Impala vehicles, worldwide, since the late 1950s. While people only know the Impala now as mostly a bland rental vehicle, the Impala was once fabulous. It debuted in 1958 and reached its heyday in the late 50s and early 60s. I learned to drive in my family’s ‘62 Impala, I drove my 1966 Impala to my first real job in Rockford, Illinois, in 1980. Fins and big engines made the Impala the perfect full-size family car. Americans have fallen out of love with the big sedans and replaced them with crossovers and SUVs.

Making Room for the All-Electric Vehicles

General Motors announced, in January, that the Detroit-Hamtramck plant would undergo a $2.2 billion dollar transformation to build electric vehicles. According to information released at the time, GM’s first all-electric truck, a GMC Hummer, will be a pickup with production scheduled to begin in late 2021. The Cruise Origin, a shared, electric, self-driving vehicle unveiled by Cruise in San Francisco will soon follow.

The Detroit-Hamtramck plant has plenty of experience building electric vehicles. It was home to the Chevrolet Volt, Chevrolet’s first mass-marketed hybrid electric vehicle. At the time, workers went through extensive training to handle the highly precise assembly of the battery-powered Volt. Employees are expected to go through similar retraining when the plant comes back on line in 2021. Current employees are being assigned to other plants during D-Ham's retooling. They will have the option of returning when the plant returns to production.

I hate to see the Impala go, but it has fallen out of favor lately. I’m sure they will continue to be the highlights of car cruises throughout America. It will be fascinating to see the new electric vehicles that will be built at the Detroit-Hamtramck assembly plant. One can only hope that they will become the new icons representing the new era in vehicle manufacturing.

DeanMcManis wrote on March 2, 2020 - 1:55pm Permalink
I liked the current Impala, but I am more eager to see GM move to EVs with something other that the Bolt (which I also like). The Hummer EV has been teased, but we will have until May 20th to see what GM's new EV pickup really looks like, and again we will have to wait at least a year after that before the EV Hummers reach showrooms. Still, this is good news!