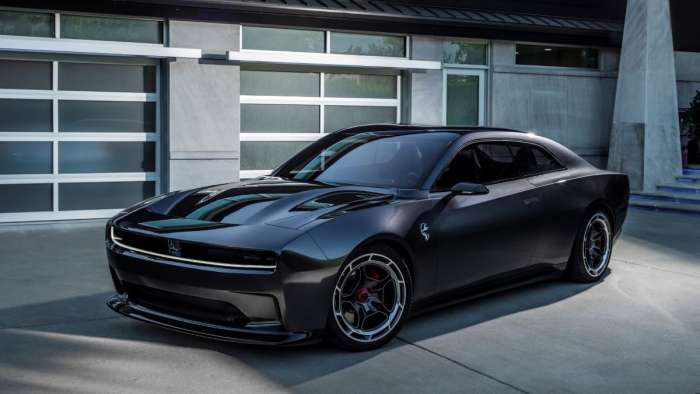 Muscle car lovers can breathe a sigh of relief because Dodge's electric muscle car concept "Drives like a Dodge, looks like a Dodge and feels like Dodge".
Advertisement

Dodge saved its best announcement for last, this Speed Week. The brand unveiled its highly anticipated electric muscle car concept called the Dodge Daytona SRT. When discussing this new vehicle in a video conference last week, Tim Kuniskis, Dodge brand chief executive officer – Stellantis, said they were revealing this concept last because “After seeing this, no one is going to want to talk about anything else.” Earlier this week, Dodge revealed its plans for the 2023 Dodge Challengers and Chargers, as well as a new Dodge Hornet PHEV.

The electric concept vehicle has three patent-pending features that will set the Daytona concept apart from all the other battery electric vehicles. The concept takes its name from the iconic Charger Daytona model that was the first vehicle to break 200 mph on a NASCAR track in 1970.

R-Wing: Front aerodynamic wing creates a longer nose on the vehicle that harkens back to the Dodge Daytona of the 70s. The nose retains the 1968 Dodge Charger profile while improving the aerodynamics.

Fratzonic Chambered Exhaust: For the first time, a special exhaust system gives the EV the sound of a performance vehicle. It will be as loud as the SRT Hellcat, but it will be different. That is why it carries a Banshee logo.

eRupt: The muscle car EV will have a multi-speed transmission with an electro-mechanical shifting experience similar to an ICE vehicle.

Charger Daytona SRT Concept powered by new 800V Banshee propulsion system. There will be other performance levels offered, like a less powerful 600V and 400V system. Dodge will offer performance upgrades through its Direct Connections Parts division and Power Brokers Dealers, so buyers can have up to nine different levels of performance.

“The Dodge Charger Daytona SRT Concept exists because performance made us do it,” said Tim Kuniskis, Dodge brand chief executive officer – Stellantis. “Dodge is about muscle, attitude and performance, and the brand carries that chip on its shoulder and into the BEV segment through a concept loaded with patents, innovations, and performance features that embody the electrified muscle of tomorrow. The Charger Daytona SRT Concept can do more than run the car show circuit; it can run a blazing quarter-mile. And when it comes to product cycles, it outruns Darwin. Charger Daytona does more than define where Dodge is headed, it will redefine American muscle in the process.”

“One day ago, the brand’s first-ever electrified performance vehicle was unveiled, the all-new 2023 Dodge Hornet. Today, we revealed a peek at our eMuscle future with the Dodge Charger Daytona SRT Concept. When we said it was going to be an electric summer for Dodge, we meant it.”

The Daytona will be built on the new Stellantis STLA large EV platform, but at this point, Dodge isn’t saying where it will be built. Dodge is ending the current Dodge Challenger and Charger models with seven special 2023 models that will be built at the Brampton plant. Those details were revealed earlier this week.

For complete information on Dodge and the brand's Never Lift plan, which provides a 24-month road map to Dodge's performance future, visit Dodge.com and DodgeGarage.com

Tesla Contemplates A New Strategy for China Retail even As Sales Boom
Jay Leno on Elon Musk & EVs: “I Think He Should Get ... Credit"
END_OF_DOCUMENT_TOKEN_TO_BE_REPLACED