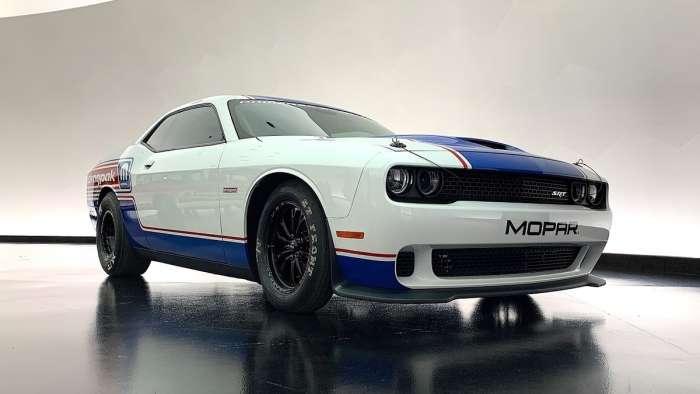 Dodge and Mopar promised big news at the 2019 SEMA show in Las Vegas and did not disappoint. Meet the 2020 Mopar Dodge Challenger Drag Pak that will blow your doors off.
Advertisement

Leah Pritchett of NHRA fame took to the stage this evening in Las Vegas, Nevada, to fire up the 2020 Mopar Dodge Challenger Drag Pak. This new performance 2020 Challenger marks the fourth generation of the modern-day drag racer. Dodge only plans to produce 50 of the race cars that will give buyers a turnkey racer loaded with suspension and chassis upgrades. The racer is certified as NHRA and NMCA ready.

Yeah, it has got a HEMI in it! In fact, it has a supercharged 354-cubic-inch HEMI V-8. This is the fourth generation of the popular Drag Pak. Dodge revolutionized racing by producing the factory-built, racetrack-only Mopar Dodge Challenger Drag Pak editions.

In introducing the car, the Mopar representative said they are committed to producing cars and trucks that scream for attention. They chose to introduce the latest race car at the Specialty Equipment Market Association because SEMA draws “the most obsessed fans on earth”.

“Mopar and Dodge/SRT collaborated to make this factory production-based Challenger Drag Pak not only a forced to be reckoned with at the strip but also an instant collectable for Mopar enthusiasts,” said Mark Bosanac, Head of Mopar Service, Parts & Customer Care, FCA - North America. “Our legacy has been won at the track by the women and men who pour all they have into being the best. This new Challenger Drag Pak gives them the tools to stay in front of the competition.”

Dodge is not yet releasing the pricing details or when you will be able to order the 2020 Mopar Dodge Challenger Drag Pak. The company is just now delivering the 2019 Mopar Dodge Drag Pak Editions.

The paint and graphics on the 2020 Mopar Dodge Challenger Drag Pak is meant to be modern with a retro flair.

“We want this to look so cool that when the customer buys a Challenger Drag Pak he or she wants to run these graphics because they are so iconic and stand out,” says Mark Trostle, Head of Performance, Passenger Car and Utility Vehicle Design for FCA – North America. “Mopar people are proud of the heritage and the look and they want to show that off.”

New Upgrades for 2020
New for the fourth-generation Mopar Dodge Challenger Drag Pak, the Strange rear axle assembly uses adjustable coilover shocks, four-link suspension with wishbone and an anti-roll bar. Wheelie bars and a parachute mount are integrated into the chassis and are standard.