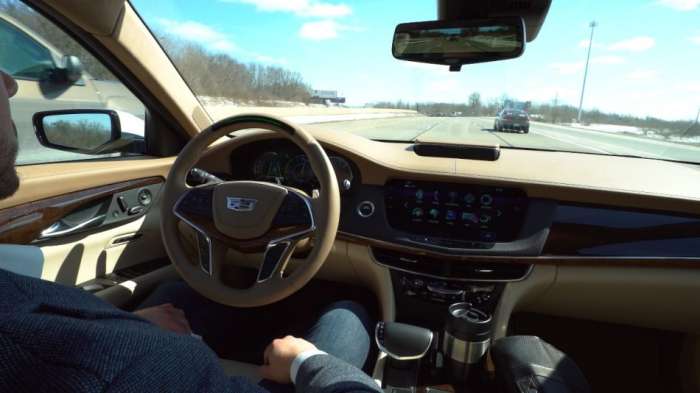 Cadillac is promising that its 2018 CT6 will feature new Super Cruise technology that will make it the leader in hands-free driving on the highway. They are not calling this auto-pilot technology, but more of a self-driving mode coupled with a driver alert system that will keep the driver engaged while self-driving is activated.

According to the automaker, Super Cruise adds a LiDAR mapping system and a driver warning program to the network of cameras and radar sensors that are already being used in the active cruise control systems. Cadillac says the extra LiDAR mapping and driver engagement will set the Super Cruise apart from their competitors.

One of the keys of the new Super Cruise is the focus on keeping the driver alert.

According to Cadillac, the driver attention system uses a small camera located on the top of the steering column that focuses exclusively on the driver and works with infrared lights to track head position to determine where the driver is looking whenever Super Cruise™ is in operation.

If the driver ignores the warnings, the system escalates the alerts, include audio and visual alerts, as well as alerts in the seats, similar to lane departure alerts.

Cadillac is determined to not let the driver fall asleep, while Super Cruise is engaged. The Super Cruise system could also be a life saver in the event of a medical emergency.

According to Cadillac’s press release, “In the limited event of an unresponsive driver, the Cadillac CT6 utilizes the full capability of onboard driver assistance technologies to bring the car to a controlled stop and contact OnStar to alert first responders, if necessary.”

The main focus of the new Super Cruise system is to allow drivers the ability to take their eyes off the road long enough to complete simple tasks, like adjusting the audio, taking a call or checking the navigation. It is not a true auto-pilot system that would let drivers read a book or work on their computer.

Most of the enhanced cruise control systems only send drivers alerts to encourage them to stay engaged. The 2018 Cadillac CT6 will be the first to continually monitor the driver’s engagement in case they need to resume control of the vehicle.

Because the system depends heavily on LiDAR mapping, it can only be used on divided highways-highways with defined on and off ramps. At the beginning, it will not be set up to navigate intersections, rural roads or city streets.

Joe rich wrote on November 30, 2017 - 2:56am Permalink
I have owned 4 cats vehicles and loved every one of them. Currently Iown a 2016 luxury cts. Love it. The new prices seem to high. I doubt if I will buy another one. GM always manages to blow some thing good.

Tesla Giga Berlin's New Hurdle: It's Not Only the Gov't, but Now Tesla Itself
Teslas Are Sold Out Until 2023, But The Timing May Reverse
END_OF_DOCUMENT_TOKEN_TO_BE_REPLACED