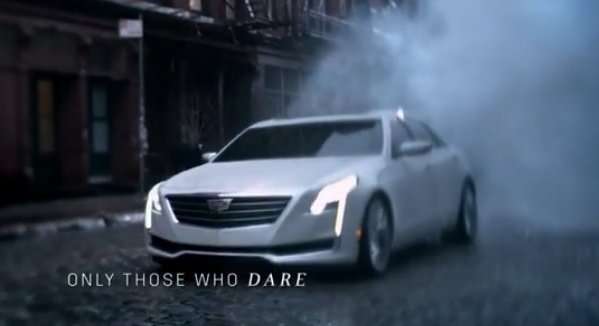 Cadillac CT6 Could Pack Twin Turbo V8, Could be Named LT5 or LTX

During a recent Q&A session with Jalopnik readers, Cadillac boss Johan de Nysschen hinted that the upcoming CT6 full sized luxury super sedan could have a twin turbocharged V8 engine and based on the recent trademark filings by General Motors, that TT V8 could be called the LT5 or LTX.
Advertisement

During the lengthy Q&A session, de Nysschen was remarkably forthcoming in answering the questions of Jalopnik readers and when the subject of the new CT6 range-topping sedan came up, the Cadillac boss was just as open. One reader asked how well the upcoming CT6 would be able to compete with the Mercedes Benz S550 or BMW 750, and this was de Nysschen’s reply: "…the lightweight body structure allows us to achieve formidable performance even with a twin-turbo V6. Imagine how this car would perform with a twin-turbo V8."

Twin turbo V8 in a relatively lightweight full sized Cadillac? Where do I sign up?

Expected Performance of the CT6
Considering the impressive levels of performance offered by so many of the modern Cadillac models, including the more budget friendly VSport models up to the newest ATS-V and CTS-V models, I would expect that the CT6 would be a strong performer.

That twin turbo V6 that the brand’s boss mentioned offers 420 horsepower and 430lb-ft of torque in the CTS VSport while packing 450 horsepower and 440lb-ft of torque in the new ATS-V. It sounds like some version of the CT6 will come with that engine and I would guess that it will be a base model when compared to the Mercedes Benz S550 or BMW 750 lineup. The Benz S550 comes with a twin turbo V8 with 449hp and 516lb-ft of torque while the BMW 750 packs a twin turbo V8 of its own with 445hp and 480lb-ft of torque. Based on those numbers, the Cadillac CT6 with any of the current 3.6L twin turbo V6 engines would be a little light on torque while offering very comparable horsepower. It should also be noted that the “base model” BMW 7 Series is the 740, which has a TT V6 with 315 horsepower so in terms of entry level V6 models, the Cadillac would likely hand the base Bimmer a beating.

A twin turbo V8 would almost certainly offer over 500 horsepower and 500lb-ft of torque (likely way over), and that would allow the CT6 to comfortably outrun the competitors from Germany, but what can we expect from the new twin turbo V8?

The Cadillac TT V8
A twin turbo V8 would likely be based on the same LT engine architecture as the V8 engines in the Corvette Stingray, the Corvette Z06 and the upcoming 6th gen Camaro. However, where the Stingray and Camaro use the naturally aspirated LT1 and the Z06 uses the supercharged LT4, the new Caddy twin turbo V8 would likely have a name of its own. We reported last year that General Motors had applied for a trademark of the LT4, LT5 and LTX engine names and with LT4 being used for the new Z06 engine, LT5 and LTX are left. Of course, GM could also apply for another trademark to name this TT V8, considering that the arrival of this new V8 could be a couple years away.

Regardless of the name, the Cadillac twin turbo engine should be one of the most powerful engines in the GM stable, but I don’t expect it to be THE most powerful option within the company. The LT4 in the Corvette Z06 packs 650 horsepower and 650lb-ft of torque, and some people believe that GM is using a twin turbo V8 to build more power than the LT4. I don’t think that the choice to run a twin turbo engine rather than the supercharged LT4 is about making more power. I think that this choice is about style.

All of the competitors for the Cadillac CT6 use a twin turbo V8 and in an effort to more closely compete with the best large luxury sedans in the world, GM is using a similar formula. However, with the twin turbo V6 offering comparable power to the German V8s, expect the American TT V8 to produce far more power. The Germans do have higher performance models with more power, but those cars also have price tags far, far higher than what we should expect for the new Cadillac.

Honest Money wrote on February 26, 2015 - 2:28am Permalink
I will definitely buy a CT6 with the TT-V8 if they have the good sense to build a wagon variant.