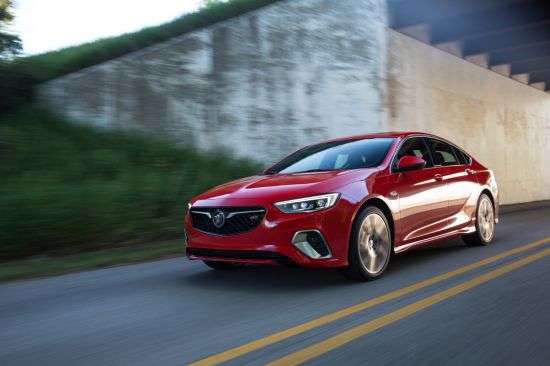 Buick is promising that the 2018 Buick Regal GS is the most powerful we have seen in years. The sporty Buick Regal GS will have 310 horsepower.
Advertisement

The press materials compare the new Buick Regal GS to Audi and BMW models at a much more affordable price of $39,990.

“This is a sport sedan designed for everyday driving, but one that makes every drive special,” said Duncan Aldred, vice president, Global Buick and GMC. “The new Regal GS is in the sweet spot of the market: more refined and luxurious than the mainstream, more value for the price with style and premium features on par with higher-end competitors, and with standard features like AWD with active twin clutch and a rear sportback design that will surprise customers with its usefulness.”

The GS model has a number of features that are unique to the model including, standard 19-inch wheels, performance brakes with Brembo front calipers and a sport-tuned dual exhaust system.

The Buick Regal GS also has special performance seats. The seats feature integrated headrests and adjustable lumbar and thigh supports. The seats are heated and ventilated and come standard with a massage function.

Earlier, Buick announced that the 2018 Regal would be available with a Sportback design and also available in a wagon called the TourX. The TourX is expected to appeal to drivers who love the handling of a sedan and the function of an SUV. The GS will be the most powerful and most expensive of the models.

The GS title goes back to the Gran Sport designation. According to Wikipedia, “The Gran Sport name has been used on several high-performance muscle cars built by Buick since 1965. As Buick was positioned in the General Motors brand hierarchy one level below Cadillac, which did not have performance models, Buick GS branded models were the most opulently equipped models from GM during this era.”

All of the 2018 Buick Regal models are designed to draw younger drivers to the brand, which typically skews older. The Buick Enclave and Encore have helped bring in the younger demographic. The more powerful V6 engine and sportier trim may attract some of the enthusiasts who were lost when the automaker shut down the sportier Pontiac division.