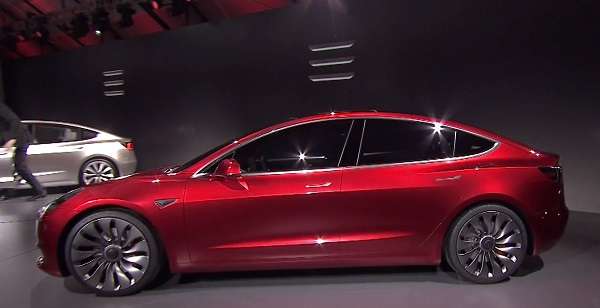 What To Do While You Wait On For Your Tesla 3?

I have read on some forums of the dilemma that Tesla Model 3 reservation holders are experiencing because of the long awaited arrival of the much anticipated Model 3. While many were early to get in their deposits, some sleeping in line and gladly donating their $1000 deposits, others of us on the East Coast sat back and looked at the anticipated roll out dates.
Advertisement

Personally, I thought long and hard before I dropped my cash into the Tesla interest free bank account. Now that Tesla has a higher valuation than Ford in the worldwide marketplace of stock ownership, one must wonder, has everyone lost their collective senses?

How can Tesla Model 3 be worth more than Ford?

I will leave that up to the day traders to figure out and if I was a betting man I sure WOULD NOT sell this companies stock short like so many did. I personally believe the stock has so much upside based on the long list of products they are rolling out. My roof is screaming for solar shingles. Can’t wait for that one! The Model 3 is just what I have wanted for about 5 years but I’m still waiting and there are people here in NJ who’s leases are ending for Nissan Leafs, Chevy Bolts and potentially even BMW I3s that would love to have their Model 3s right now.

Since the roll out schedule of Tesla Model 3 favors those on the left side of the country, we are stuck out here in NJ with the Chevy Bolt alone for our 200+ mile range EV choices at the moment. Many people have wondered about why the rollout didn’t go to states that have a high population density, a proliferation of Tesla retail locations or high charging station availability. I started the NJ Electric Auto Association in 2008 and was extremely hopeful that by now there would be many 200+ mile options available by now. We are still waiting.

The Tesla Model S, the Model 3, Model X and now the Model Y! The acronym says it all! The fleet of electric cars that have changed the face of the automotive landscape and forced the hand of all the car companies so that now I can’t even think of a car company that doesn’t have an EV or at least a PHEV in its line up.

Will Tesla Run Out of Steam (Electrons)?

Truly the introduction of the Chevy Bolt has started to make a difference to many of the people that thought better of dropping the $1000 deposit on the Tesla 3. Since it has taken Tesla so long and has been prone to production delays in the past, waiting for the Chevy Bolt might have been a good call after all. Additionally, the likelihood of a Nissan Leaf 200+ mile range 2018 could be out prior to the Model 3 actually getting to NJ.

Tesla has never really had any competition in the long range EV market. The closest thing was the Nissan Leaf and that was hundreds of miles away from it. Now that you have a lower cost option in the Chevy Bolt and the 50 state rollout in dealerships across this county will be a true test to the all Electric Car company. As a former shareholder of Tesla I strongly support everything they are doing but wonder if they will face a stronger competitive threat from the legacy car manufacturers.

EV Competition Could Change The Market All Together

As with any market competition drives down price. This will inevitably be true of the EV market. More and more companies are racing to be in the 200 Miles range club so Tesla has its work cut out for it. I say they have good history here to defend their position. Their recent acquisition of Solar City proves they can be competitive. Solar City was not the only solar provider nor the only one with its go to market strategy of a PPA (Power Purchase Agreement) so I believe they are capable of handling the competitive threats that develop in the EV space.

Things That Set Tesla Apart From Other EV Manufacturers

One thing that sets Tesla apart from the other manufacturers in the EV market is the GigaFactory. Once that is fully operational it will be producing EV batteries and solar power storage like crazy and this will drive down prices in the market further. So by controlling the major obstacle to competitive pricing from one of the three major components of an EV (Battery, Motor, Controller/Inverter) they have insulated themselves from the competition with their available supply chain.

Another thing that sets Tesla apart is the self driving car market. Unlike any of their competitors they have far more real life data filling the computers at Tesla making the A.I. engine at Tesla even smarter every single day. No other car company has the same level of data logging experience to map out nationwide roadways that Tesla drivers have taken. This technology will further separate them from their competitors.

While Nissan, Ford, Google and others are trying to win on the Electric car self driving automobile it is only Tesla that will be pulling in the large amount of information needed to truly perfect this technology. The speed with which they are taking this to market is proving that self driving cars will be a larger part of the market as will EVs in the coming years. Its tough to say when and how this market will develop as I would have thought the EV market would have been further along by how however as explained, as the range increases the market will grow and as the price comes down and the EV Range gets closer to gas car range, then the game truly has changed.

With an overnight charge and 400 miles of range at the price of a gas car, you know that fossil fuels will be a thing of the past at that point. Overall I expect Tesla to come out on top in the coming years and to succeed big time. Maybe they are more valuable than Ford.

Mike wrote on March 30, 2017 - 8:39am Permalink
I had a Tesla model 3 order but decided to get my $1000 back and buy a 2017 Chevy Volt. Why? Because I am afraid by the time I would have gotten the Tesla model 3 the $7500 Federal EV tax refund may have been gone. I was also leery of the what the Tesla model 3 may have as options and final price. I also didn't want to wait for the Chevy Bolt. I also have a 2011 Chevy Volt that I love so I had no qualms about buying another Chevy Volt.
Doug Stansfield wrote on March 30, 2017 - 10:33am Permalink
Glad you at still EV some of the time. The Chevy Bolt is out so if you ever want to trade it in, I'm sure you can swap then. The Bolt range is really going to change things in the market!
Thom Moore wrote on March 30, 2017 - 10:41am Permalink
I guess the answer is to speculate on the market prospects and final configuration until we get to choose ours...
Keith Bramlett wrote on March 31, 2017 - 10:33am Permalink
I bought out my Leaf in December, instead of lease return, to hold me over for the year. Doesn't hurt that our other car is a Model S. Love Tesla products and next month we'll get the skinny on their Solar Roof.