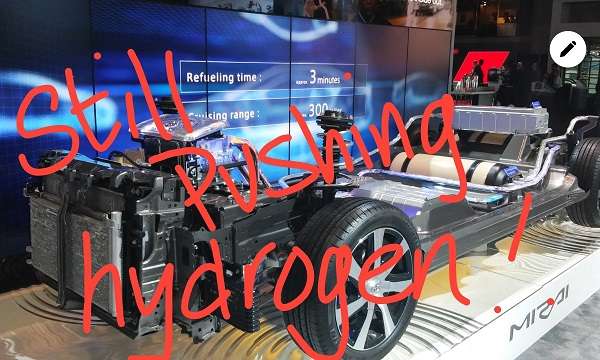 Toyota has high hopes for the Mirai hydrogen electric car and believes the future will be Hydrogen transportation. I was at the NY International Auto Show this past Wednesday and noticed the large amount of floor space that Toyota had dedicated to the Mirai. I spoke to a nice lady and believe her name was Maggie and she explained that Toyota plans to pay for 12 hydrogen refueling stations throughout the New York Metropolitan Area.
Advertisement

I couldn’t help but ask when, where, how much are they investing per station and how many they planned to roll out after the initial 12 and what time frame are they talking about. Based on her reaction to my questions was an indication of Toyota true plans are not going to be revealed at the NY International Auto Show. She did the equivalent rolling of her eyes with utter contempt as if I had asked her something inappropriate.

The truth here is it is most likely a distraction. In 2006 the movie “Who Killed the Electric Car” came out and explored the reasons why the General Motors company killed the EV1. A segment of that movie dealt with the subject of Hydrogen and showcased a Hydrogen car. Back then the producers asked similar questions about when it would be available and the movie showed it being put back up onto a flatbed truck to be towed to the next event. I haven’t seen the movie in a long time and can’t remember which car company was showcasing the Hydrogen car from the movie but the point is clear. Since I can remember, the alternative to the internal combustion engine is always the hydrogen car and them never actually make it to market. There are good reasons for that.
Since 2006 and Toyota’s insistence that they would be making hydrogen cars illustrates that they never really plan on releasing a hydrogen car for good reason.

There are No Hydrogen Refueling Stations Really

While there are a few hydrogen refueling places, they are rare. Very rare. While you can easily go to your cell phone and download the PlugShare app and can easily locate and tons of EVSEs (electric vehicle supply equipment) Toyota is still highlighting the hydrogen car. Also see how the 2016 Toyota Mirai launch went awry due to lack of fueling stations.

Make no mistake, Honda is going down the same road with the Clarity. Although the Honda Clarity has three different versions of their alternative fuel car (a Pure EV, a PHEV and a hydrogen version). The pure electric car (EV ) goes 80 miles on a charge, the Plug-in Hybrid version gets 42 miles of EV range and the Hydrogen version will likely not see much action at all.

The issue here in my mind is why do car companies keep doing this year after year, after year. Hydrogen cars are a wait and wait and wait for the offering. There are safety issues, range issues, refueling issues, deployment issues and consumer acceptance issues with the Hydrogen cars. The electric car has made a comeback in a big way since the 2006 movie came out. The director Chris Payne made a follow-up movie calling it the Revenge of the Electric Car.

With EVSEs popping up everywhere and battery capacity improving every year, little innovation has come from the hydrogen camps. For example, in 2008 the Telsa Roadster only when about 250 miles of EV range. That time, a true feat! The longest range production EV of its time then. 6031 18650 lithium cells made that possible. Now you can retrofit the Roadsters for the same size battery pack and over 400-mile range car.

So at this point, EVs are making a huge comeback. They have managed to sell over a million cars so far with plugs, they are increasing in range and there are more offerings than ever before.

So what are the reasons for wanting to switch to hydrogen from the automotive sector in my view?

Here are my ideas and maybe you have some too.

1. Keeping People Addicted to paying at the Pump
The idea here is mostly keeping taxing authorities happy. The United States federal excise tax on gasoline is 18.4 cents per gallon and 24.4 cents per gallon for diesel fuel. The amounts are staggering. According to Wikipedia, On average, as of January 2017, state and local taxes and fees add 31.04 cents to gasoline and 31.01 cents to diesel, for a total US average fuel tax of 49.44 cents per gallon for gas and 55.41 cents per gallon for diesel. That amounts to over $35 billion in 2014 just at the Federal Level. So the taxing authorities would be very happy to just switch over from gasoline to hydrogen. Just imagine every gas station you stop at being converted to a hydrogen pumping station. No difference to anything you do today.

2. The maintenance would be higher to keep dealers happy
The service business of a dealership is significant. To switch over to a pure EV market in the future would seriously impact the economies of the auto market and have far fewer maintenance costs to bill consumers/drivers. The opportunity to keep consumers addicted to services visits is an appealing proposition for the auto industry in my view. Don't miss: 2017 Toyota Mirai's Pricing Will Have Battery EV Fans Laughing Out Loud.

3. There is an unlimited supply of Hydrogen
Once every single service station is converted and each consumer is driving a hydrogen car, the prospect of running out of the stuff is virtually impossible. So once the conversion is in place, there is no end to the supply of the fuel source. Now that is appealing to almost everyone even including myself who couldn’t be more of an EV advocate. My thoughts, however, are different. As we move more and more of our electrical production to solar, we have an unlimited supply of energy directly from the sun. If the sun goes out, we are all done anyway so the prospect of that is more doomsday than I care to visit and discuss here.

Here is another review I did a while back on hydrogen.

Parks McCants wrote on April 15, 2017 - 12:04pm Permalink
An interesting read. I've driven both the the Clarity and Marai. These maker's take very different approach to hydrogen electric, with the Clarity being much more " conventional car-like" on the driving side of the equation. Once you're behind the wheel, you quickly forget that you're driving a FCV. Here's the thing Doug. It needn't be an either or proposition. With 17 million cars and light trucks sold in the U.S. annually,(on a good year) There is plenty of room for consumer choice in the growing EV segment. * In 2016 there was a paltry 2500 FCVs sold in the world. As to Hydrogen, I say bring it on!
Doug Stansfield wrote on April 15, 2017 - 9:31pm Permalink
Parks, thanks for commenting. Watch the movie Who Killed To The Electric Car. Then let me know your thoughts.
Rennie Allen wrote on April 16, 2017 - 11:59am Permalink
I have 25,000 miles on my 2016 Mirai and I have plenty of hydrogen stations. My other car is a Chevy volt which I alternately drive to work (52 mile commute one way) and I have to remember to go and unplug the volt at lunchtime otherwise I am penalized for using the spot. I very much prefer taking the Mirai where I don't need to worry about such nonsense. There are two stations within 5 miles of my workplace and two more that are directly on my commute route. With 312 miles range and stations on my commute route, fueling is not an issue.