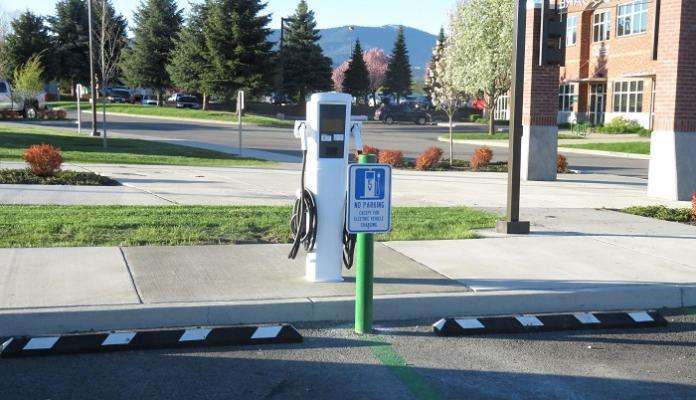 Should Volt drivers use public charging?

A tipping point is coming in transportation. Those of us who have acquired a plug-in hybrid or EV are, for the most part, eager to see these vehicle flourish. However, in the near-term, there will be major issues.
Advertisement

Before everyone goes ballistic, here’s a couple things: 1) I drive a Chevy Volt, as does my wife and daughter, and 2) I used “Volt” to get you to click on this story (sneaky, huh?).

A tipping point is coming in transportation. Those of us who have acquired a plug-in hybrid or EV are, for the most part, eager to see these vehicle flourish. However, in the near-term, there will be a very tight supply of charging stations and even worse than that, chargers are going up in the wrong places. Combined, these two factors could dampen enthusiasm for what should be a great time for drivers.

First, the demand: The Chevy Bolt EV just had the best first 7 months of sales for any plug-in vehicle. Ever. It even outsold the first 7 months of the original Prius, while only being available in a few states. The Tesla Model 3 has over 400,00 deposits on orders. Of course, Tesla has its own charger network but that doesn’t make it immune to charger real estate availability. Top that off with many, many manufacturers publicly stating they are entering the market and you’ve got supply/demand issues.

Secondly the supply: chargers, other that Tesla “destination” chargers, are going up in major metropolitan areas. I understand the thinking: go where the customer base is located.

However, even EVs with 200+ mile range will be unable to get from some major cities to others, without stopping overnight. This will be a major issue, in the eyes of those opposed to plug-in vehicles.

Expect them to really push this limitation. Within metropolitan areas, chargers are often found in the parking lots of restaurants, drug stores, malls and mass transit parking lots. I would not want to spends multiple hours at any of these locations. What aren’t they going up at movie theaters? Schools? Libraries? Sports venues? In other words, places we’d usually spends several hours at a time? Finally, many charging vendors are limiting the time an vehicle can be plugged in, especially to DC fast charging stations, as a way to be more fair. However, this tactic can further limit the effective range of an EV.

Due to this limited supply of public charging locations, different classes of plug-in vehicle owners, who should be natural allies, are fighting. I’ve heard EV drivers say, “You shouldn’t charge a Volt here. You could be preventing someone from making it home tonight!” I’ve heard Volt drivers say, “They chose to get an EV. I shouldn’t have to use gasoline, due to their short-sightedness!” Both side have a point, but does that move the revolution forward?

It’s bad enough that we have drivers of gasoline-powered vehicles ignoring the “charging only” signs. There are plug-in vehicle drivers who take these spots, whether they’re charging or not, because they usually are prime parking spots. This is because it’s a less expensive electric run, the closer the charger is to the building. Then, of course, we probably have all left our cars plugged in, after the batteries were fully recharged.

We all have to think this through a little more clearly. Those of us driving plug-in hybrids: A3 e-trons, i3s (with REX), i8s, 330es, 740es, Pacificas, Karmas, C-Maxs, Fusion Energis, ELRs, Optimas, Prius Primes, Volts and many others, all have a vested interest in the success of all plug-in vehicles. We all want to eventually drive an EV, as soon with sufficient range for our comfort comes along. Those of us charging at public chargers, although we could continue on gasoline, obviously do so because we want an EV experience.

Let’s be a little more cognizant of the fact that the plug-in market is still in its infancy. It could collapse and there are powerful forces rallying to cause just that.

Think it through. Do you need to charge or just want to charge? Make your decisions based on that.

Peter Chastain wrote on August 28, 2017 - 4:11am Permalink
Assuming that plug-in hybrids charge more quickly than BEVs, you could discourage charger-hogging by following the lead of Tesla and charging by the minute, if the car is left plugged in after charging is finished. And any vehicle parked in a charger space without using the charger should be towed.
kent beuchert wrote on August 28, 2017 - 9:00am Permalink
These problems all stem from the utter chaos that exists amongst the EVs of the world. Instead of giving millionaires unneeded $7500 "stimuluses" to buy a $70,000 Tesla , the stupid and ignorant Federal govt mis-run by Obama SHOULD have worked out a standard charging protocol between the various automakers of the world. Right now we have 3 , count them, 3 different DC fast charging protocols. Aside from the obvious idiocy of plug incompatability, it means that you are unlikely ever to achieve full charging capacity at a multi charger station, except during the unwanted times when the lines are long and charging becomes a nightmare. In my 73 years, I have never witnessed such governmental ineptitude with respect to such an easy problem to handle. Our Federal govt, which regulates practically everything under the sun, at a cost that is staggering, can't manage to establish charging standards , a process that costs essentially nothing. You would think the Beta/VHS tape debacle would have taught this generation something about the value of standards, if nothing else. A "high tech" country, my ass. Just look at how India and China are moving ahead full blast on the power generation technology of the future (a near future at that) : molten salt reactors, these from the folks (plus Russia) who can build a LWR nuclear plant for 1/2 to 2/3rds the cost that we can, and can actually do so on time and under budget. Meanwhle the U.S. builds 19th Century technology windmill power generators. That are uncontrollable and require fossil fuel power backup, at that. Just how dumb can a country possibly be? Yuuch.
Dave - Phoenix wrote on August 28, 2017 - 5:34pm Permalink
This issue is really only an issue with "free" chargers. There is very little competition for pay chargers. I see this as a problem that will solve itself over time as EV adoption grows, there will be fewer and fewer free chargers out there. In regards to free chargers, everybody with a plug should have equal opportunity to get a free charge. Why should one group have the privilege of free public charging and another have to charge only at home and pay for it?

LG's New EV Battery Plant Is a Welcome News for Tesla
Tesla Giga Berlin's New Hurdle: It's Not Only the Gov't, but Now Tesla Itself
END_OF_DOCUMENT_TOKEN_TO_BE_REPLACED