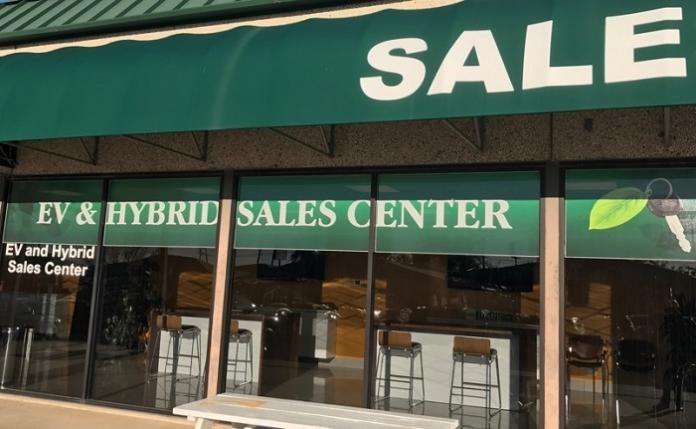 The Chevy Volt led me to a pretty drastic career change: selling cars at my Chevy dealership. I had no experience in commissioned sales and was a bit worried about my ability to make a living, but I knew I wanted the world to know about electric vehicles. I knew I had to be a part of the way forward.
Advertisement

I hungered for the opportunity to sell Chevrolet Volt and other electric cars. I had been a manufacturing engineer, in several industries. I had been a sales engineer in the computer-aided design & manufacturing (CAD/CAM) field. I had been a Business Manager at an Apple Store (I’ve never owned a Windows PC). I had never, ever sold things on a commission basis. I’m like you. I have bills. I have dreams.

I also have the desire to make a difference, for the better, in this world. I honestly see my job as saving the planet. It’s what gets me up in the morning. It puts a smile on my face as I drive to work. It makes me take risks. I was lucky, in that I leased our first two Chevy Volts, from the #1 Chevy dealer in volume in 2012, Classic Chevrolet, in Grapevine, Texas. Grapevine is a suburb of the Dallas / Fort Worth metroplex, in which the DFW International Airport is located.

Around the first anniversary of my first Volt acquisition, I asked my salesperson, Kevin, what the dealership had planned for National Plug-in Day (a precursor to National Drive Electric Week). He was unaware of it, which blew my mind! The dealership ended up inviting me to speak at their Saturday sales meeting. On some level, the dealership knew there was a problem. The sales staff had no interest in the Volt. There was too much to learn and little payback for them in commissions. It was much easier to sell a pickup, SUV or sports car than this new Volt thingy.

After the sales meeting, the General Sales Manager invited me to spend the day, speaking with potential Volt customers. I helped one salesperson sell a Volt and three days later, I was hired as the dealership’s first “EVangelist.”

I’m certain the other, experienced car salespeople were thinking, “Who IS this doofus?” They certainly didn’t expect me to last more than a few months.

As they got to know me, some of the staff took me under their wing to teach me the car biz. Fortunately, these were some of the most ethical people I have ever had the pleasure of knowing. In a dealership that doesn’t offer training (you’re expected to be seasoned before working there) I found great instructors.

At first, I would pass off truck or SUV deals to others because I felt I lacked the knowledge to sell those types of vehicle.

Then, I realized I was going to starve. So I started to learn.

For my first couple years, like every other salesperson, 60% of my sales consisted of trucks. This IS Texas, you know.

Then I sold my first Corvette Stingray.

I started to feel I was growing a viable career, but my heart was in Volt sales. When I had an opportunity to sell a Volt, my coworkers said they could recognize it in my face. I beamed!

In January 2015, the dealership’s Vice-President sent me to the Detroit International Auto Show, to report on the unveiling of the 2nd generation Volt and the all-electric Chevy Bolt EV. I had become the recognized expert in plug-in vehicles at one of the largest Chevy dealerships in the world. During this time, I realized there was a problem with how these vehicles were sold. Due to the extensive questions from potential plug-in vehicle purchasers, the salespeople were spending much more time trying to earn much smaller commissions. Consequently, they avoided Volt sales and sent customers to me.

Then it hit me: Moving someone from gasoline-powered vehicles, with which they are very familiar, to a plug-in vehicle is very similar to moving a person from Windows to Mac OS! There is fear. There are many, many questions. The customer needs reassurance, from someone who’s been there before them. It was like selling at Apple!

With some trepidation, I went to the dealership’s owner, Tom Durant, and said, “We are not ready for the Chevy Bolt EV.”

He asked, “Why not?” I explained that these vehicles had to be plugged in or we could not test drive them. Therefore, we could not sell them. At that time, we had two level 2 chargers, one of which was on its last legs and the other was constantly busy charging Service customer’s vehicles. Tom is a pioneer in the car business and understood immediately. He told me to contact the facilities manager and get what was needed. We purchased five level 2 chargers and installed them, where the inventory was parked. To do this, a trench had to be cut through the parking lot to get high amperage electricity to the chargers.

This was not a trivial expense.

Shortly after this, I pitched the idea of a building specifically for plug-in vehicle sales. I photoshopped an image of a street sign for “Electric Avenue,” as part of my pitch.

We gutted a building that had been known as the “retirement home.” It was a building staffed by salespeople with decades of car sales experience, who worked when they wanted, selling to their established clientele. My vision was the new building would not have cubicles, where salespeople would work with clients on a one-to-one basis. The floorpan would be open, with large, flat screen TVs, playing educational videos and slideshows, intended to educate the potential buyer, without the salesperson being present. When it came time to make a sale, the salesperson would be able to present to multiple customers, simultaneously. This could compress the sales cycle, allowing a skilled plug-in vehicle salesperson to multiply their efforts and therefore their income, lowering resistance to plug-in sales.

We opened the building in early February of this year, shortly after General Motors dropped the bombshell that the Bolt EV would be rolled out to various states slowly. Texas was expected to receive the first shipments in August 2017 (this month).

Needless to say, traffic to the building was extremely limited. The salespeople assigned to work with me were very unhappy. It was a tough time.

Luckily, the Bolt arrived in Texas in late June and we had built up a clientele waiting anxiously for its arrival.

I’m no genius. If I had it to do over again, I would have left room for each salesperson to have a private space to make and receive phone calls. But the die is cast and we’re making the best of things, as they are. Two of the original team left the building, during the lean (i.e. starvation) months.

Today, the building is staffed by just two of us. But the dream lives. In fact, last Saturday, the building lived up to my vision. Three couples were present simultaneously, to get a new Chevy Bolt EV. We were able to have some of them watch videos and slideshows, while paperwork was prepared for others. Time was compressed. All three sales were closed.

Charlotte Omoto wrote on August 30, 2017 - 12:39am Permalink
I admire your effort to sell GM EVs, but you might think about working for Tesla. When I went to trade in my Model S for a new one, the service center center where I picked up my first one in 2013 had moved to a nicer, larger area and way more people working. I bet you can get a pretty good job in either sales or delivery.