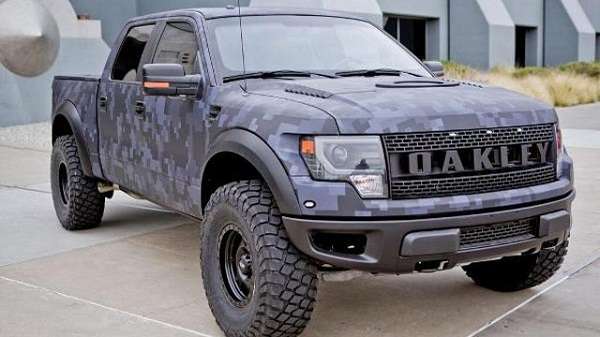 Many people think golfers are a pompous bunch. These people likely imagine that golfers drive expensive luxury cars, as the game of golf is often associated with privilege and class. While this sort of assumption is almost always incorrect, a new generation of golfers is proving that golfers don't always arrive in a Rolls-Royce. A recent example? Pro golfer Bubba Watson’s customized Ford SVT Raptor complete with black digital camo print wrap and a bulletproof exterior.
Advertisement

Bubba Watson is well-known throughout the golfing community as being a “one-of-a-kind.” On the golf course, he is a risk taker who is best known for his unorthodox swing and for winning the 2012 Masters with one of the most memorable shots in the tournaments history. He is also known for his growing collection of cars, like a 1969 “General Lee” Dodge Charger that was used in the Dukes of Hazzard. Watson reportedly paid over $110k at auction for the car.

His newest ride is a 2013 Ford SVT Raptor that took Mike Smith Fabrication of Huntington Beach, Calif., six months to complete. The car is a combination of highlighting his Oakley sponsorship and showing off his uniqueness. While the camo wrap stands out most, the bulletproofing is really something. The entire exterior including the windows is bulletproof.
Also standing out is the custom grille with Oakley spelled out. For reference, on the stock model, this grille spells out Raptor.

“One of the things that really impressed Bubba was our Sports Marketing trucks at Oakley Headquarters; in particular a surf-specific truck with all the cool gadgets we had installed after market," said Al Janc, Oakley Sports Marketing Manager of Golf, on Oakley's website. "As a result, we decided to build Bubba this bulletproof vehicle that he could enjoy, while helping to represent the brand and at the same time protect he and his family. It was great fun taking what he wanted in a truck and adding things we thought were cool to come up with this finished product together."
On the inside, Oakley’s logo sits on the head rests surrounded by a color scheme of lime green. Watson says the color choice is simply his favorite color.

"I have to say that my team at Oakley has really out-done themselves… again," Watson said, adding, "We went with the Ford Raptor because it’s a great truck, it's functional and I already knew I liked it because this will be the third one I've owned. Seeing the finished product is even more impressive than I imagined.

My favorite thing would have to be that it's bulletproof. How many people can say they have a bulletproof truck? I can! Plus, it has a matte black and gray 'digital camo' paint job, big off-road tires and lime green accents on the interior. It's awesome!"

Rounding out the truck is the horn which has four different and distinctive choices. One of those, as you may imagine, is the iconic sound of the General Lee.
The next time something tells you that pro golfers are stuffy and smug, remind them of the Bubba Watson’s bulletproof, camo wrapped Raptor. That just might change their mind.