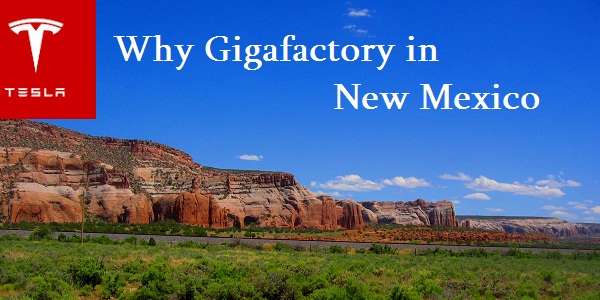 Why New Mexico, not Texas, should win the Gigafactory

The potential location for Tesla’s Gigafactory has been narrowed down to four states: Arizona, Nevada, New Mexico, and Texas. The Lone Star State looks like the most attractive option on paper and Nevada and Arizona are both very viable candidates, but the relationship thus far between Texas and Tesla compared to New Mexico’s enthusiasm for the company’s vision could tip the scales in favor of New Mexico.
Advertisement

The proposed Gigafactory is a $5 billion economic development prize that will add 6,500 jobs and instant global credence in manufacturing. It will produce 50 GWh of battery packs per year at full scale, occupy a land area of nearly two square miles (including the solar and wind fields necessary to provide power), and bring the luster of Silicon Valley to an empty stretch of desert in one of the aforementioned states. The states offer various incentives in the form of taxes, or lack thereof, as well as existing manufacturing experience and wind resources of varying strength to become the location of much talked-about Gigafactory.

Those who follow Tesla are aware that the company hasn’t quite been getting along with Texas lately. Tesla is unable to sell its vehicles directly to customers in the state because Texas law prohibits a manufacturer circumventing dealers. Bypassing the middleman is a critical part of Tesla’s business model, as it allows the company to control the price of Model S and properly educate the gallery employees that will then educate customers on the benefits of going electric.

Texas has resisted Tesla’s efforts to have the law changed to make an exception for American electric car manufacturers, a provision that would not affect the existing paradigm for conventional vehicles and automakers.

CEO Elon Musk will take into consideration to what degree the candidates share his vision for a low-carbon transportation future, and I don’t think Texas truly believes in what Tesla is doing despite its recent commitment to wind power.

New Mexico, on the other hand, has demonstrated nothing but respect and exuberance for Tesla and their vision of the future. In the words of Jon Barela, secretary of the New Mexico Economic Development Department: "Gov. Susana Martinez, state and local leaders greatly admire Tesla. We are believers in the company's vision and philosophy. This is an incredible company that is changing the world for the better. We are ecstatic that New Mexico is a finalist for this phenomenal project."

It is that kind of enthusiasm for the way Tesla is changing the auto industry that should land New Mexico the much-desired Gigafactory. The company is pragmatic and will certainly consider the economic advantages of locating in each particular state, but how receptive the candidates are to Tesla’s plan for disrupting the automotive sector and changing the way we think about cars could be the deciding factor.

Arizona and Nevada have yet to distinguish themselves as front-runners in this 4-state race, though both offer unique advantages. Texas appears to have the best package on paper, but if they really want the Gigafactory they had better very quickly start convincing Tesla that they’re believers. New Mexico certainly is.

Weapon wrote on March 10, 2014 - 4:26am Permalink
I will disagree, not with the assessment of New Mexico. But with the assessment of him looking for a state that shares his vision and will shun the states that don't. The location that they will pick is the one that makes the best sense for Tesla. You don't convince people by secluding them, you convince people by showing them. When electricity(in the house) was just starting, some states opposed the thought of it. After actually experiencing electricity in their houses, their attitude changed completely.
Luke Ottaway wrote on March 10, 2014 - 12:32pm Permalink
You may be right...it'll be interesting to see what direction Tesla goes. But I have a feeling Musk will shun conventional wisdom, as he so often does. However, you do make a good point about showing vs. turning your back on the unconvinced. One of the reasons why truly high-volume production of the Model E starting in 2017 could mark the tipping point for the EV movement.
Richard Hubert wrote on March 14, 2014 - 2:16pm Permalink
Luke - Excellent, interesting write-up. I am sure for a large plant dealing with a number of dangerous chemicals that there are numerous environmental issues, so how a state manages those is another piece of the puzzle. I am pretty sure that is what eliminated California instantly from any consideration for this plant. Also your point about the ability to generate power from solar & wind is another consideration which would naturally eliminate most northern states, keeping the preferred location somewhere in the sunny Southwest. But your final 2 sentences really sum it all up well about a Texas plant location. It's simple logic and simple politics. Why would you want to make a major investment in a large plant in a state which is not a believer in your business? Not only that - Texas is currently actively discouraging any Tesla business within it's borders. I would certainly go where I was welcomed.