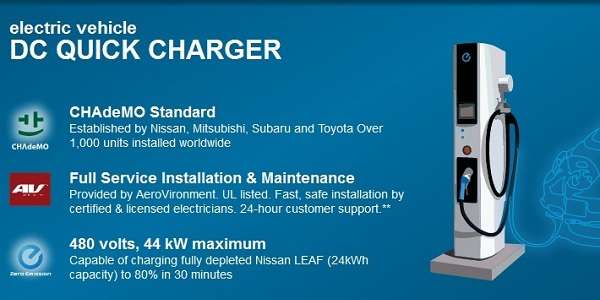 Why can’t we agree on a DC fast charging standard?

The SAE Combo standard, favored by American and European automakers, requires only a single charge port on the vehicle because it simply adds two pins to the base of the widespread standard J1772 plug for Level 2 charging. The CHAdeMO plug is bulkier and requires an additional charge point on the vehicle, as in the Nissan Leaf. Both are comparable in terms of capability for power delivery; this leaves ease of use and a single vehicle charge port as the only real (yet significant) advantages of the SAE Combo standard.

What does this mean for you? If you own a Nissan Leaf, you will be able to charge up at virtually any DC fast charging station in the country, as CHAdeMO was the first standard to come to the United States along with the Leaf and Mistubishi iMIEV. The Chevrolet Volt is not and will not be equipped with fast charging capability. If you own or plan to own a Chevrolet Spark EV or a BMW i3 equipped with the fast charging option, you’ll have to find SAE combo-equipped stations, of which there currently are few. The first station featuring the SAE Combo plug was installed by eVgo in October 2013, whereas the CHAdeMO infrastructure is far more established. Upcoming and future plug-in models from Audi, Chrysler, Ford, Mercedes, Porsche, and Volkswagen will also use the SAE Combo DC fast charging standard.

Luckily some charging stations, like Blink DC fast charge stations and eVgo's Freedom Stations, are equipped to receive a second DC charger. This was done with the standards war in mind; for example, Blink stations are dual-port so one plug can be swapped out for the SAE Combo plug, and all currently installed Freedom Stations can have the SAE Combo charger added virtually overnight. The current DC fast charging infrastructure is limited to begin with, but it is projected to grow rapidly and future stations will almost certainly be equipped with both plugs.

CHAdeMO has an advantage because it currently has the most vehicles on the road worldwide; however, it is essentially designed for just one model here in the United States, the Leaf. The other automakers are keen on the SAE Combo standard, which appears to be the superior protocol. Beyond 2018, Europe will only install SAE Combo chargers. It will take some time for the SAE Combo protocol to gain momentum, however.

The debate has slowed the deployment of fast charging infrastructure and adds cost and complexity, because stations will likely have to be outfitted with both connectors. Accommodating both standards is more expensive for EVSE providers and these costs will likely be passed on to the drivers using the stations. It would be great if one standard could be agreed upon, but it appears unlikely.

What do you think of the DC fast charging standards war? Leave comments below.

Al S wrote on March 22, 2014 - 2:35pm Permalink
We, the consumers, could agree on a standard. However, if "we" includes manufacturers, some of them want to muddy the waters with competing standards. For instance, Chrysler/Fiat doesn't believe in EVs. The only make one, the Fiat 500e because they're forced to, but they don't offer a quick-charge port on it. If they had voted for CHAdeMO as a standard, it would have strengthened pro-EV competitors like Nissan due to the thousands of CHAdeMO stations already in existence. So, naturally they voted for a standard which is nearly vaporware for the moment.
mike w. wrote on March 22, 2014 - 4:34pm Permalink
In the early days. SAE came out and said J1772 and all the manufactures (except TESLA) jumped on board and installed j1772 compliant plugs on their plug in cars. I'm wondering what would have happened if SAE would have also come out with a DC fast charge standard at the same time? It would be sweet if you could get your EV with whatever plug you want.
Ashley Abraham wrote on March 23, 2014 - 3:12am Permalink
What is important is to have just one standard in specific geographical markets, not necessarily globally. For example, BMW in Japan use CHAdeMO, but in Europe use Combo2. In Europe not having to have charging stations with Combo2 and CHAdeMO significantly reduces the cost of charging stations in addition to which Combo2 equipped cars are less expensive to produce because they use just one connector. Europe has avoided a standards war by the strong position taken by the European Commission requiring all CHAdeMO stations to be converted to Combo by end of 2018. If you could get your EV with whatever you want, that would be very bad because it would necessitate more expensive infrastructure against everyones interests.
bruce dp wrote on March 24, 2014 - 1:27am Permalink
IMO Tesla's design is superior to all others. Whether charging at high power or a lower power, it uses the same smallish, light, slender coupler/connector. Now if Tesla were to make it easy for all to use their standard (not ask too much money for its use), all plugins would benefit. {brucedp.150m.com}
anderlan wrote on March 24, 2014 - 11:49am Permalink
"Accommodating both standards is more expensive for EVSE providers" Not if you can plug a present EVSE J1772 plug into a combo socket on a car at your house. YOU CAN DO THAT RIGHT? DON'T TELL ME THAT YOU CAN'T. If we have to change everyone's home EVSE, my opinion just went from "Dang, SAE combo is a pain in the ass for everyone." to "I hope the SAE combo standard dies a quick and incredibly painful death and then burns in hell just to be sure it doesn't inflict any more stupid pain on society."
Luke Ottaway wrote on March 24, 2014 - 12:38pm Permalink
The SAE Combo standard doesn't affect home charging. It is for DC fast charging only, whereas home charging with Level 1 or 2 uses the standard J1772 plug. The SAE Combo is essentially an addition to the J1772, so a vehicle compatible with SAE Combo will accept J1772 for Level 2 home charging and SAE Combo for DC fast charging. It is CHAdeMO that requires an additional charge port.
Charlotte Omoto wrote on May 15, 2014 - 12:44am Permalink
I understand that Tesla is working on a CHAdeMo adapter for the Model S. So if that is possible, I don't understand why there needs to be two charge ports to use these different chargers. Also, don't the other EV auto manufacturers provide adapters to use different chargers?
mike w. wrote on May 15, 2014 - 6:09pm Permalink
Tesla's CHAdeMo adaptor is available for $1000. The Tesla uses the same charge port for AC and DC charging. All the other manufactures use 2 ports. One for AC charging and the second for DC charging if the vehicle has DC fast charging. CCS systems same but different. The other EV manufactures all use the same AC socket and the communications needed is provided by wall mounted docking station. The tesla can use different adaptors to charge from a wide Varity of plugs. the adaptor signals the on board battery changer to limit current to prevent tripping the supply breaker. the other EV manufactures don't need adaptors
ed wrote on August 1, 2014 - 3:57pm Permalink
I am looking at the BMW i8 and that is coming with the SAE plug. Ugh. Almost impossible to charge on the east coast along I95