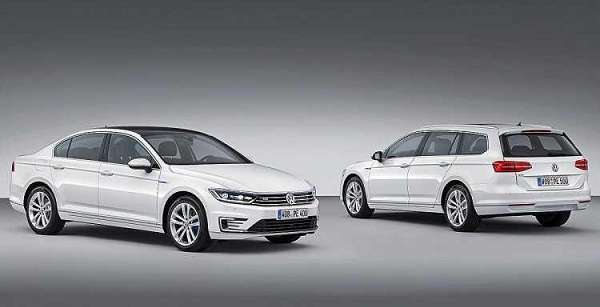 Volkswagen to unveil Passat GTE plug-in hybrid – when will it make it to the U.S.?

Why do you tease us so, Volkswagen? Following in the footsteps of the (for now) Europe-only Golf GTE plug-in hybrid, the European spec Passat GTE will be unveiled at the 2014 Paris Motor Show this week. When will we be graced with its presence across the pond?
Advertisement

A plug-in version of the Volkswagen Passat will debut this week at the 2014 Paris Motor Show. The Passat GTE (Grand Touring Electric) will go on sale in Europe in the second half of 2015 in both sedan and wagon forms, but it will be awhile before it hits the United States.

As a result, the front wheel drive powertrain of the Passat GTE is nearly identical to that of the Golf GTE. It uses a 154-hp 1.4L turbo four-cylinder engine coupled with a 113-hp disc-shaped electric motor integrated with the six-speed dual clutch transmission.

Peak system output is 215 hp and 295 lb-ft of torque, both representing slight increases from the Golf GTE’s 201 hp and 258 ft-lb. As a heavier midsize sedan (or wagon), the Passat GTE will not be quite as sprightly as the performance hatch, but will still manage the 0-60 sprint in about 8 seconds.

The 9.9-kWh battery pack will allow an all-electric range of 31 miles on the European NEDC cycle, or what would likely be somewhere near 20 miles using EPA ratings. Top speed in electric mode will be limited to a respectable 81 miles per hour.

Why America should get the Passat GTE, and when to expect it

Of course, like the Golf GTE before it, Volkswagen has not confirmed any U.S. version of the Passat plug-in sedan or wagon.

If the Passat plug-in was to arrive in the United States tomorrow, it would find little competition. The Ford Fusion Energi is the only widely available plug-in hybrid based on a popular midsize sedan, and it has sold 8,683 units through the first 8 months of 2014.

Sales of the Fusion Energi have grown rapidly, and a competitor from Volkswagen with more trunk space (and a competitive starting price) would likely find success as Americans grow accustomed to the idea of plug-in vehicles, especially those that provide electric driving for daily commutes and a gasoline engine for weekends and long trips. (For what it’s worth, we’d take the wagon).

Unfortunately, the U.S. spec Passat is slated to receive a mid-cycle upgrade for the 2016 model year but will not get its MQB redesign until late in the decade – most likely as a 2018 or 2019 model year. Though unconfirmed by Volkswagen, the switch to VW’s modular platform will then allow a plug-in variant to be introduced on U.S. shores, so count on waiting until at least 2017 or 2018.

For now, we will have to be content with the Audi A3 e-tron Sportback, which shares the Golf GTE powertrain, arriving next year as a 2016 model.