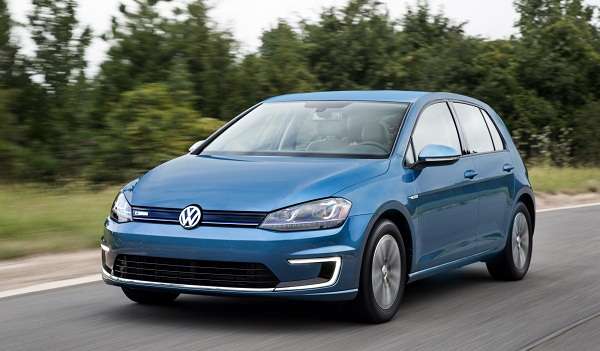 Plug-in hybrids, electric vehicles, hydrogen fuel cells...which of these technologies, if any, will win the future? Volkswagen’s view is a bold one.
Advertisement

Anyone doubting Volkswagen’s commitment to electric vehicles ought to pay close attention to last week’s comments from Dr. Heinz-Jakob Neusser, the head of powertrain development at VW.

Bridge to the future

Australian outlet Motoring reports on Dr. Neusser’s comments to media at the French round of the World Rally Championship.

Even as the VW group plans to release a flood of plug-in hybrids, the most recent being the Passat GTE, Volkswagen is known to be developing a so-called “super battery” and seems to be quite confident in its efforts to improve energy density:

“Battery [technology] makes the biggest steps in very short time frames,” explained Dr. Neusser. “We have more energy density in the batteries [than before], and in 2015-2016 will come the next step which means we come from 25-28 Ah energy density to 36-37 Ah. Now we are actually working on the next step to around 60 Ah.”

Dr. Neusser went on to indicate that 2020 and beyond will see a completely new battery chemistry, which presumably will be the 60 Ah ‘next step.’ He went on to say that the next-generation e-Golf, due out by 2017, will achieve 300 km of range compared to the current model’s claimed 190 km.

Of course, those figures are not EPA numbers. Given that the current e-Golf is expected to be rated somewhere between 70 and 90 miles here in the U.S., the next generation will likely achieve a range in the neighborhood of 110-140 miles. That nearly 60% increase in range is greater than Dr. Neusser’s projected improvement in energy density (in Ah), which would seem to indicate VW will be adding more cells to the future e-Golf.

But the good doctor didn’t stop there: with the 60 Ah cells expected by the beginning of next decade, Neusser hinted the e-Golf (or similar vehicles) with that battery technology would be capable of 500-600 km of range, or about 310-370 miles. Again, applying the EPA approximation using the current e-Golf totals takes those numbers down to about 220-280 miles, but they remain impressive nonetheless.

(Read: Do electric vehicles have to match the characteristics of gasoline?)

His remarks lead us to believe that Volkswagen is truly a big believer in battery electric vehicle technology – the German auto giant is merely focusing on plug-in hybrids in the short term while it uses its legendary R&D budget to work on improving battery tech behind the scenes.

We are inclined to believe VW has the right idea. Though plug-in hybrids are well suited to today’s market, while customers grow accustomed to driving on electricity with the practicality of gasoline for long trips, the dual-powertrain system has inherent limitations and will inevitably be overcome by battery electrics.

And though hydrogen might be a good solution in an ideal world, we do not live in one of those. Though the concept may take hold in Japan and remains an attractive option for heavy transport, it too will fade in favor of battery electrics for the light-duty market in most parts of the world.

Once all electric cars are capable of 200 miles of range or more, which may very well be the case by 2020, charging infrastructure and sticker price will be the only variables of concern. Expect charging infrastructure to grow rapidly and prices to fall slowly, especially as automakers do all they can to boost range with more battery capacity. But both will no doubt be heading in the right direction as plug-in hybrids and hydrogen fuel cells buy time for the electrification of the world’s light-duty vehicles.