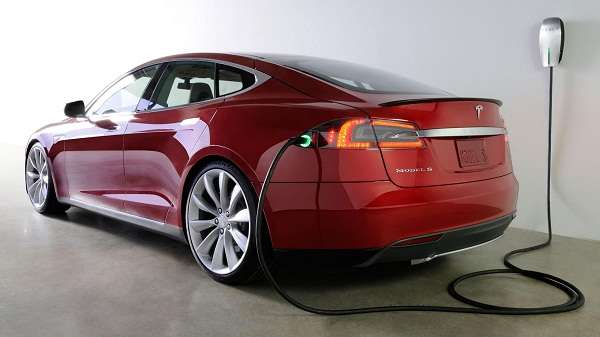 On Tuesday New Jersey added itself to the short list of states barring Tesla’s direct-to-consumer sales model that already includes Arizona and Texas. It’s been a war of words since as Tesla lashes out at the state for what appears to be a sleazy move.
Advertisement

Tuesday afternoon the New Jersey Motor Vehicle Commission passed new rules prohibiting Tesla from selling vehicles directly to its customers in the state, despite the fact that two Tesla stores were previously granted licenses and have been operating within the Garden State’s borders for over a year. The sides seem to disagree on who is in the wrong: Gov. Chris Christie’s office insists that Tesla would have to properly seek legislative change to allow its business model and that Tesla knew this from the start.

Tesla has effectively called bull on this statement, as Diarmuid O'Connell, Vice President of Business Development at Tesla, had this to say: "The statute in New Jersey plainly allows Tesla to be licensed to sell cars there. Indeed, the Motor Vehicle Commission has licensed Tesla under that statute ever since October 2012, and any suggestion that Tesla was told 'since the beginning' about any problem with its ability to be licensed there is false. The only thing that has changed is the Christie Administration's sudden decision to go around the Legislature in an attempt to enact a rule that the statute doesn't permit. Worse, it has done so without any reasonable notice or even a public hearing."

So who are you more inclined to believe, the politicians or the upstart car company trying to change the world for the better? I’m leaning toward Tesla. It sounds like New Jersey rushed this rule change through with little warning before people in the state, and particularly Tesla owners, knew what was happening.

In addition, the argument offered by the New Jersey Coalition of Automobile Retailers president Jim Appleton effectively makes Tesla’s case for them. In claiming that Tesla’s business model is not innovative (which, it almost goes without saying, is far from the truth) Appleton implied that dealerships "promote greater access to warranty claims and safety recall service, which are both something manufacturers hate.”

I’ve got news for you, Jim: Tesla is not your typical manufacturer. They sell vehicles that deviate completely from the old internal combustion paradigm and are brimming with innovation and new technology, which means they require a different model for sales, education, and service. Good luck finding a dealer anywhere in the United States that offers service for electric vehicles that comes close to comparing with Tesla; the jury is still out on warranty claims since the vehicles are so new, but Tesla has already proven that the word “recall” barely even applies to them, as they can and have performed most upgrades wirelessly a la Apple software updates.

New Jersey, you didn’t make the right choice. Banning Tesla accomplishes nothing but appeasement of those who benefit from the deeply flawed status quo. You can be sure that Tesla owners and supporters will be letting Governor Christie’s administration know about it.

rgw46 wrote on March 12, 2014 - 9:31am Permalink
Why not. Maybe someone is seeing a problem with this. 1. Why charging station. Why not 110v House current. Anyone says it is not possible--LIE. 2. Too expensive. Where is the working stiffs auto? 3. Google what ZAP and Lotus were going to do and even others.. This is a rich mans toy, not practical..
Jack wrote on March 12, 2014 - 9:34am Permalink
You're wasting your breath. It's also illegal to pump your own gas in New Jersey. You know all those mean jokes about New Jersey? There's a reason. There's a reason.
edward shuman wrote on March 12, 2014 - 9:41am Permalink
Well go figure, this is just another sign that Chris Christe is a big goverment democrat. This also shows that Goverment Motors can't compete in the real world.
Bob Smith wrote on March 12, 2014 - 10:16am Permalink
Nice try, do not pass that Republican trash off on the Democrats. He is just bought and paid for by the car dealership industry. Corporate american has driver that garbage party since the beginning and things will never change. If Tesla want things to go their way they will have to bribe him like every other corporation.
Barish wrote on March 12, 2014 - 10:00am Permalink
The article is just empty hype. What was the rule? What actual complaint can someone in New Jersey make to the government? How can I make fun of their government if you even try to explain the rule. We get it Tesla is innovative; how does that interact with the specific claim New Jersey is making?
Luke Ottaway wrote on March 12, 2014 - 11:40am Permalink
Edward and Bob, I don't think it's a question of Republican vs. Democrat (although in general, Republicans are probably less likely to support EV technology). Dealers did contribute something around $60,000 to Christie last year, and their influence even if not monetary appears to be significant. I understand that the government is trying to protect consumers, but Tesla isn't necessarily trying to force other automakers to follow their model. For example, in Texas they proposed an amendment that would allow American manufacturers of all-electric vehicles to sell directly to consumers. That would have no effect on the existing OEMs that make up nearly all auto sales.
Luke Ottaway wrote on March 12, 2014 - 11:43am Permalink
rgw46, the vehicles can certainly be charged on house current...however, with the large battery pack in a Tesla that low power level would take a very long time to recharge the battery entirely. That is why Tesla has rolled out an extensive high-power public charging network for their vehicles. And yes, the Model S is far too expensive for the middle class; however, Tesla is planning to introduce a vehicle in the $35,000 range in 2017. This may still be considered too expensive, but remember they are considered a luxury automaker and set their standards for quality very high.
Luke Ottaway wrote on March 12, 2014 - 11:47am Permalink
Barish, the rule passed Tuesday afternoon states that automakers must have a franchise agreement with auto dealers to sell cars within the state. This will likely force Tesla to close their existing stores in New Jersey that were previously licensed and have been operating in the state since 2012. As for complaints to the government, it appears as though Tesla will have to pursue new legislation in the form of an amendment or law in their favor to allow their direct sales model. Public opinion can certainly help their cause in swaying lawmakers to rule in their favor.
rgw46 wrote on March 15, 2014 - 3:31am Permalink
Well I do not know your background, but your reply that Telsa is high end kind of made me laugh. But another story. You also said it would take too long for charging at 110v house current? Ever see a step up/down transformers? I can sell you one for $92.00 or up to 350.00 depending on AMP's you need.
Luke Ottaway wrote on March 15, 2014 - 3:55pm Permalink
Well, I described Tesla as a luxury automaker because their only product starts at $70,000 and is typically purchased with options driving the price into triple digits. It's obviously no Ferrari, but Model S is a very legitimate high-end car that has been highly praised by everyone who has driven it. As for the charging time, I was referring to charging on a basic 120 V/15 A house current that would take about two days to fully charge the larger battery.
Bob Kropp wrote on March 31, 2014 - 7:24am Permalink
New Jersey had no problem issuing business licenses, permits, etc. for a fee before kicking them out, eh? Are they going to refund all of that and compensate the cost of vacating said premises? Will New York do the same?
Johnf830 wrote on April 30, 2014 - 4:41pm Permalink
Thank you for some other informative website. Where else may just I am getting that kind of info written in such an ideal means? I've a venture that I am just now working on, and I have been on the glance out for such info. kkefaeegkdbd
Smithe865 wrote on April 30, 2014 - 4:42pm Permalink
I have to agree with your statement with this issue and bkdekgbgcffddccc
Ed Shuman wrote on April 30, 2014 - 6:34pm Permalink
Elon Musk has the right vision. the government should be about job s not restriction. Take Et3 for example, instead of the boondoggle slow speed train that is wasting hard earn tax dollars.