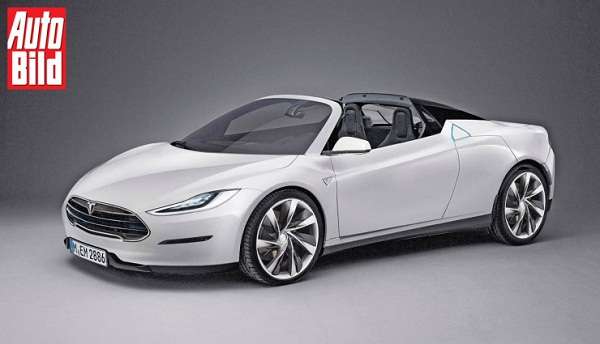 Tesla Motors’ first car, the Lotus-based Roadster, ended production in 2012 so the company could focus on the higher-volume Models S and X. A new report suggests the Roadster will be revived in 2017, although we find that timetable unlikely.
Advertisement

The German automotive website Autobild is reporting that according to Tesla sources, a next-generation version of the Tesla Roadster could arrive in 2017. It will be known as Model R and be built on either the Model III platform or a new smaller platform.

It is widely expected that Tesla will come out with a new Roadster eventually, but this is the first time a date as early as 2017 has been suggested. We are highly skeptical that the reported timetable is accurate, however.

Model R is coming, but not before Model III

Autobild quoted several Tesla sources that allegedly revealed details about the company’s plans for Model R and an upcoming Model C city car. Given that Elon Musk recently hinted that Tesla is “not currently showing all our cards,” it is indeed possible that these two rumored vehicles are in the works.

However, we think a Model C is unlikely and a successor to the original Roadster is hardly a priority for Tesla at this point. With the launch of the Model X crossover next year, ongoing Supercharger network rollout, and the concurrent development of the Gigafactory and mass-market Model III targeted for 2017, Tesla has plenty on its plate without devoting much attention to an expensive and low-volume sports car.

If the German publication were referring to 2017 as simply the official introduction date for the Model R concept, we would consider that quite reasonable. We don’t speak German, and it’s hard to ascertain the article’s exact intent using Google translate.

The enticing prospect of a purpose-built Tesla sports car, with supercapacitors?

With that said, when Model R does arrive it will be an exciting revision of the car that helped launch the company. While the original Roadster was based on a Lotus platform, Musk has since admitted that basing the vehicle on an existing car was a mistake.

Chief designer Franz von Holzhausen has said that the next Roadster will “show what Tesla can do.” That’s enough to make any EV or sports car enthusiast salivate given the abilities of the 4600-pound Model S and the lessons the company has learned since its early days.

With the Tesla drivetrain architecture, a ground-up two-seater built for high performance will undoubtedly amaze. Though Tesla denied it based on shared parts content, the original Roadster was essentially a modified Lotus Elise with a somewhat awkward battery pack.

If the company were to start from scratch with its signature skateboard-style battery back and rear-wheel or even all-wheel drive electric powertrain, a Model R would be able to take on the best cars in the world in both acceleration and handling. In addition, it is likely that Tesla is developing its own supercapacitor technology to further enhance the unique performance potential of an all-electric powertrain.

Obviously, this Model R will not be at all cheap. It would be a fun project to demonstrate what Tesla is truly capable of when it isn’t trying to rid the world of gasoline cars, and only small numbers of lucky and wealthy folks would have the privilege of owning one.

All the same, those of us who appreciate performance cars and the capability of electric powertrains will be looking forward to the eventual introduction of Model R. Count on some time after Model III begins rolling off the Fremont assembly line – we’ll speculate that 2019 will be the year that Model R hits production. We look forward to official word from Tesla on the car, whenever it may arrive.

Red Sage wrote on August 11, 2014 - 6:59pm Permalink
Uhm... Why does it have mirrors? I really expect the next Tesla Roadster to be a lot better looking than this, to be honest...
Luke Ottaway wrote on August 12, 2014 - 8:34am Permalink
This is just a rendering from Autobild...I agree with you, Red Sage. I think Tesla will really turn Franz von Holzhausen loose on this one.