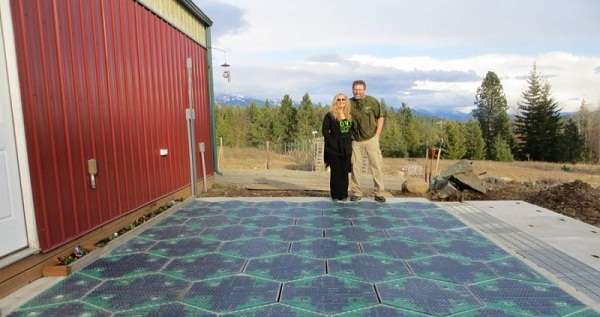 Solar Roadways would be great, but won't happen

You may have heard the idea of replacing many of America’s roads with durable solar panels that could generate electricity. It’s a great idea, but here’s why it probably won’t work.
Advertisement

Solar Roadways, an Idaho-based startup founded by the entrepreneurial and brilliant couple Scott and Julie Brusaw, has obliterated its target of $1 million in a crowdfunding campaign. The company has raised over $1.8 million to date in just over five weeks through grassroots donations.

What is a Solar Roadway?

The idea generating so much support: hexagonal tiles with embedded solar panels, LEDs, and microprocessors capable of replacing virtually any paved surface with one that is “smart” and generates electricity. They are referred to as Solar Roadways, and in theory they could solve all our problems with carbon emissions from the electricity generation and transportation sectors.

Each tile would have a special tempered glass covering capable of withstanding typical loads that road surfaces are subjected to, as the company claims their prototype meets traction, load, and impact resistance requirements. The tiles would also have a thin heating element that would prevent snow from accumulating on the surface, and the interconnected microprocessors and LEDs lend themselves to many possible advantages such as reconfigurable lanes and warning messages.

Why it won’t work

Unfortunately, we won’t see Solar Roadways in our lifetime. The most evident problem: the sheer scale and cost necessary to install enough solar roads to make an appreciable impact on electricity generation.

Solar panels are not efficient and are not cheap. The company’s plan also includes routing data cables and power lines underground, which would inflate installation costs. Solar Roadways has not provided cost information, so we can only speculate what the system would cost on a grand scale.

Others are more qualified to estimate just how much it would cost to cover our nation’s road system with these solar panels. No doubt if we made a true commitment to the idea, the scale of the project would significantly drive down costs of the components and processes involved. However, it will still likely be prohibitively expensive to revamp our entire transportation infrastructure so radically.

Is cost really the biggest problem?

Other potential issues include the obvious question of durability; the company has built a successful small-scale prototype, and they have bright engineers working on the project who are convinced the tiles can withstand the abuses of cars and enormous trucks traveling at high speeds for decades without breaking down. But if they are wrong and the tiles only last 5 years, or 10 years, the enormous investment required will effectively become a waste of money. The surface will have to endure for at least 20 years to be truly viable.

Another obvious question is, why not just put solar panels on roofs instead? There is no shortage of roofs without solar panels, and rooftop PV panels can achieve better performance than those forced to also endure the rigors of serving as a road surface.

Not beyond our capabilities

Are Solar Roadways totally out of reach? No. The technical challenges are surmountable, and it is very possible that on the scale the company envisions costs will come down to a level where it may actually be economically feasible to cover the nation with Solar Roadways that could eventually pay for themselves through electricity generation.

These are not the real problems with Solar Roadways. The real problem is that such a radical transformation would require unprecedented and universal support: from all levels of our maddeningly immovable government, from construction companies, from utilities, from the public in general who would probably have to foot a large portion of the bill.

The concept could be successful on a small scale, if certain municipalities or companies are willing to go out on a limb and make the investment. But the system will only truly work if it is everywhere, and we currently lack the money, not to mention political will and motivation, to make that happen.

But not so fast! Stay tuned here at Torque News to find out why Solar Roadways can and should happen.