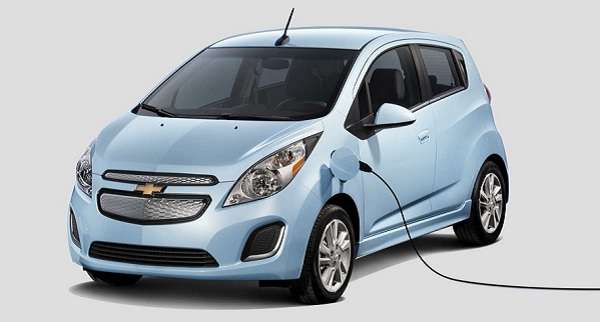 Rumors that the Chevrolet Spark EV is destined to be more than a compliance car?

Though GM still insists the impressive little EV will remain only available in California and Oregon, a few Ohio and Michigan dealers claim otherwise. Could the Spark EV climb from the ranks of mere compliance?
Advertisement

The Chevrolet Spark EV is currently not a big seller – it has sold just 551 units through May, and is only available in EV-friendly California and Oregon as a so-called “compliance car” to satisfy zero-emission vehicle mandates. Last month, though, we reported that the Spark EV was getting an unexpected battery overhaul for the 2015 model just a year into its life while maintaining its rated 82 miles of range.

The significance of the change was that the battery, now smaller and with cells supplied by LG Chem like the Volt and Cadillac ELR, was being brought in-house to be assembled in the same Brownstone facility as its electric cousins. At the time, it seemed innocent enough; a logical move to bring down costs by using smaller packs and consolidating the company’s battery production. But was this upgrade hinting at a future expansion of the Spark EV to other markets?

GM’s manager of Electric Vehicle Communications, Randy Fox, claimed the Spark EV is staying on the West Coast. Or at least, he told AutoblogGreen that “At this point in time, we don’t have any official plans to expand the Spark EV beyond California and Oregon.” Aside from the ZEV mandate, those markets are well-suited for the Spark EV because of their developed charging infrastructure.

This is where it gets interesting, though. Hybrid Cars has reported that no less than four different Ohio dealers are listing the Spark EV for sale. AutoblogGreen found a dealer in Michigan that claimed the diminutive battery electric vehicle will be hitting Midwest dealerships in “roughly the fourth quarter” of this year. And Fox didn’t explicitly say the Spark EV wouldn’t eventually hit other markets.

Will the Spark EV ever make it beyond the West Coast?

Are these rumors of Spark EV expansion just that – rumors? GM may yet elaborate on Fox’s comments, possibly to emphatically silence the whispers that the Spark EV may see the light of day in different markets.

However, selling the Spark EV in other states would make a certain amount of sense. The battery redesign brings the vehicle closer to profitability, though at its current volumes it still is surely not making the company any money. But the powerful little EV just had easily its best sales month since its launch in June 2013, moving 181 units in May. Expanding production beyond compliance levels could further improve the Spark EV’s balance sheet, and we believe that GM is more committed to advancing electric vehicles than many people give them credit for.

There is also the fact that the Spark EV is simply an excellent car. It won Car and Driver’s comparison test with its battery electric competitors, and can be had for $26,685 before incentives. If GM wanted to sell more, we have no doubt it would succeed. And as John O’Dell, senior editor at Edmunds.com, told AutoblogGreen: “It makes sense for [GM] to expand sales and it makes sense to do it in a quiet manner. The selling point for electric cars today is...peer exposure.” The more people see their neighbors driving EVs, the more they begin to seriously consider them as an option.

If the rumors are true and GM does indeed allow the Spark EV to unleash its massive 327 lb-ft of instant torque to break free of its compliance-car chains, it could bring the vehicle closer to profitability and would satisfy a great deal of customers that otherwise would never lay eyes on one. For that reason alone we say go for it, GM.

mike w wrote on June 12, 2014 - 6:25pm Permalink
Well if this car go on sale in other states than it might cut into the sales volume of the Nissan LEAF. With active cooling and similar range it might do well if it had DC fast chargeing.
Tony wrote on June 23, 2014 - 11:13am Permalink
I was skeptical of EVs until forced into it by family budget constraints. I could not be happier with my Spark EV! It's convenient that it's better for the environment, but more importantly the car is simply a blast to drive. The best part is the look of shock on teenagers' faces when you leave them in the dust at the stop light. Ha!