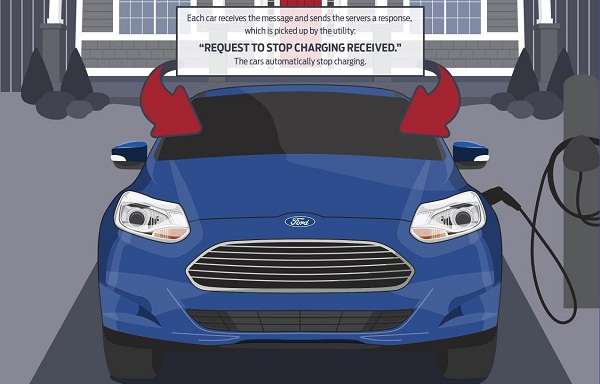 Electric vehicles should not be viewed as a threat to the electricity grid, but rather as an opportunity. With this in mind, eight major automakers and 15 utilities have joined forces to make electric vehicles charge intelligently.
Advertisement

Valid or not, it is one of the biggest fears of electric vehicle skeptics and advocates alike: suddenly everyone on the block has a plug-in car and the grid buckles under the strain, causing devastating blackouts. Fortunately, such a fate is easily avoidable with a little cooperation.

The Electric Power Research Institute (EPRI) has brought together eight of the world’s most influential automakers as well as 15 major utility companies to figure out how to seamlessly integrate electric vehicles with an evolving electricity grid.

As electric vehicles grow in popularity, the utilities charged with controlling the electric grid will have to efficiently manage the collective demand from plug-in cars. If every EV owner came home from work and plugged in right away, that could create a nightmare scenario for utilities in areas with high concentrations of electric vehicles if the demand is not managed.

The ultimate goal of this venture (as stated by GM in a press release) is to “develop a cloud-based, central server that would receive grid requests from a utility...and then translate and standardize the request so it could be relayed to all appropriate plug-in vehicles in the designated area.”

In buzzword-speak, this means electric vehicles will communicate with power companies via the cloud. The collaboration will establish a universal platform for the necessary vehicle-to-grid communications.

In simple terms, this collaboration will allow the utility to essentially schedule charging times for periods of low demand, which will lead to lower electricity prices for consumers. The communication platform will also permit utilities to synchronize EV charging with the intermittent availability of renewable energy that may otherwise go unused.

EPRI has provided an infographic, part of which is pictured above, that offers a typical example of the value of this communication between cars and utilities:

An EV owner comes home from work and plugs in at 5:30 PM, but the grid is close to maximum supply capability. The utility will send an automated message to the cloud requesting vehicles to stop charging. Automakers’ servers will receive the request and pass it on to their plugged-in vehicles, which will oblige and send a return message to notify the utility that charging has been temporarily halted.

An alliance a long time coming

This sort of cooperation has been needed for quite a while, but late is better than never. The initial pilot program will be opt-in for EV owners and will create a universal platform and interface so that utilities may contact participating owners to request they temporarily stop charging to alleviate demand.

Owners may also enroll for off-peak rates or nighttime charging as part of the pilot program.

The collaboration among the eight automakers and 15 utilities is just the beginning. In the future, electric vehicles integrating with the smart grid will be the norm rather than the exception. The potential of vehicle-to-grid integration to level out demand, improve grid efficiency, and make more effective use of renewable sources is enormous. EPRI and the participating automakers and utilities have found a good place to start.

mike w wrote on July 30, 2014 - 6:50pm Permalink
The EVSE for my LEAF is supplied by a double 20 amp ( 240 volt ) circuit breaker and the car is charged only a couple of time a week at 3 to 4 hours at a time. The central A/C in my house is on a 40 amp ( 240 volt) circuit and runs way more than 5 hours a week. We have the timers set to recharge the car at 2 am. Thus the daytime consumption for my A/C is way in excess of the night time off peak demand associated with the EV. If the grid is ok with the A/C loads in summer then there should be NO problem with EVs charging at night.
Parks McCants wrote on July 31, 2014 - 4:18pm Permalink
I believe the utilities are looking " future forward," as they should be. I received an email from Honda Tuesday. This is good news. It will take cooperation from all a-party-to Eco freindly near-future personal transportation to insure the growth and viability of the long and short range EV.
greg collins wrote on August 9, 2014 - 11:46am Permalink
How about instead of more centralized control by the utilities, have EV charging controllers that help to regulate the grid by sensing when the grid voltage is too high or too low and charging accordingly. This distributed regulation would do a more accurate job of keeping the grid stable than a blunt force "turn all the EV's off" control scheme.