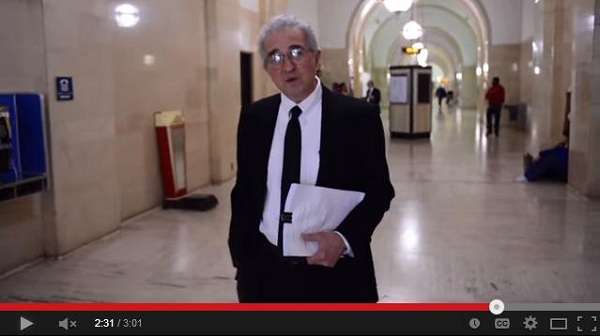 Robert Montgomery and his lawyer, Vince Megna, made it very publicly known that Tesla had sold the Wisconsin doctor a defective vehicle. Despite a loud beginning, it appears Montgomery’s lawsuit will end quietly with a small settlement.
Advertisement

The Tesla Model S objectively has one of the highest owner satisfaction rates of any car. However, even the upstart electric automaker that can do no wrong can...well...do wrong. No car manufacturer is perfect, and among the approximately 30,000 Model S vehicles that have been delivered to date no doubt quite a few have experienced technical difficulties.

One faulty vehicle in particular has attracted a lot of attention recently. On April 7 the lawyer for a Wisconsin Model S owner released a video describing his client’s “lemon” Model S that quickly went viral. Vince Megna brazenly and publicly submitted a lawsuit against Tesla alleging that the company refused to replace what was clearly a defective new vehicle.

Tesla shot back in a blog post, pointing out that the same lawyer and client had filed a lemon lawsuit against Volvo a year ago – highly unusual given that truly defective new cars are pretty rare these days. The company also questioned the legitimacy of the claims, noting that engineers attempting to diagnose the cause of a stubbornly faulty fuse discovered that it had been repeatedly tampered with.

After Tesla’s public response and ensuing social media backlash, Montgomery and his lawyer have essentially thrown in the towel in their legal campaign against the company. Said Megna: “It is disturbing that Tesla Motors, without basis in law or fact, accuses its customer of tampering with a fuse in order to gain advantage under the Wisconsin Lemon Law. This tactic is effective in social media where my client’s character has been brutally attacked.”

The doctor has decided he wants a settlement – for $108,600, essentially the price of his vehicle with options and service plan, plus attorney fees. Montgomery also will not agree to any confidentiality provisions that Tesla pursues.

If Tesla accepts the case will be dismissed with prejudice, meaning it will for all intents and purposes be gone forever. What started out as a bold attack on a seemingly invincible car company has petered out, due in large part to the social media response to the lawsuit and Tesla’s rebuttal. Whether it was Tesla’s intent or not, their response to the lawsuit rallied support behind them and redirected the social media venom at the accusers.

In the end, Montgomery will get what he allegedly wanted in the first place; a refund for his defective vehicle. Along the way we learned more about Tesla’s strict sales agreement and that the company can in fact make defective vehicles, but if you happen to receive one we’d advise against tampering with the fuse if you are going to file your lawsuit via YouTube video. When you challenge Tesla and its fan base on social media you will probably lose.

Weapon wrote on April 19, 2014 - 2:34pm Permalink
Tesla should fight, this guy already lost his volvo case and will lose this one too. If Tesla wants to be nice, have him chose one or the other, either he gets paid or his lawyer gets paid. There is no need to encourage such behavior.
mike w wrote on April 19, 2014 - 5:31pm Permalink
When this story first broke I was thinking this guy will have his hands full trying to prove the car is a "lemon". Tesla will know every time you open the trunk, door, plug in and push the "Start" button. Tesla already put a stop to the blown fuse complaint. Looks like tesla already down loaded the data from the cars computer and it will be easy to spot the difference between fact and fiction.
Tony Elshout wrote on April 19, 2014 - 7:40pm Permalink
There is little doubt in my mind that Tesla is right in this case and Montgomery and his shyster lawyer are trying to game the system. I hope Tesla hangs tough and not give this guy a dime. If Montgomery doesn't want his Tesla, he can sell it on the open market. Isn't it strange that as soon as Tesla put security tape over the fuse box that all fuse problems ended.