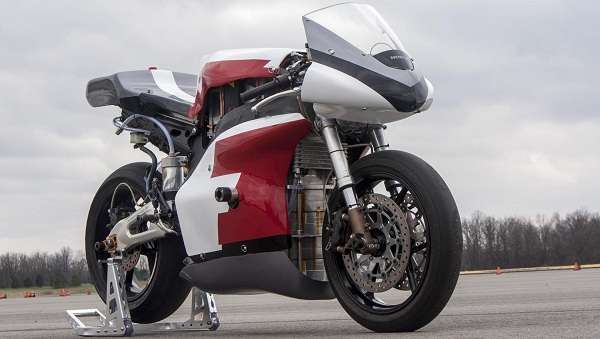 Electric motorcycles haven’t been around very long and have only been out on the world’s racing circuits for about half a decade. But they’re quickly catching up to their gasoline-powered counterparts, and the Ohio State University is right in the thick of the race to the top.
Advertisement

The Isle of Man TT Zero is one of a series of motorcycle races run through the treacherous mountains of the small island in the Irish Sea (and no, the Toyota iRoad isn't allowed to compete). Added in 2010 after the first all-electric race in 2009, the Zero represents zero emissions.

Ohio State’s student motorsports group Buckeye Current got involved in 2013 with their second electric bike, the RW-2. All the first one, the RW-1, did was set an East Coast Timing Association top speed record for electric motorcycles at 144 mph.

The RW-2 placed 3rd in its first run at the prestigious event at the dangerous Snaefell Mountain course, tops among all collegiate competitors and ahead of many professional teams. The average speed of the bike over the 37.7-mile course was 90.4 mph. Most impressively, though, the team developed the bike in just 9 months and on a miniscule budget of $50,000.

Ohio State is entering an improved model of last year’s bike in the 2014 race. The RW-2.X will be lighter and faster than its predecessor; it packs the equivalent of 70 HP and battery capacity roughly equal to that of a Chevrolet Volt, necessary to traverse the 37.7 miles (incidentally, roughly equal to the Volt’s all-electric range) at triple-digit speeds.

The other entries in the 2014 Isle of Man TT Zero will have far higher budgets, some likely in the millions. This begs the question why a group of students is able to design and build a bike that competes with the world’s best for a fraction of the cost. I give a tip of my hat to Ohio State and their incredible Buckeye Current team, and a call to the professionals to get on their level. If everyone involved in the electric motorcycle and electric vehicle industries were as clever and resourceful as these Ohio State students, the costs of electrified transportation would likely be a great deal lower.

However, all that development money has allowed electric motorcycles to make great strides since that first race; in just four years, the average speed of the winning bike has increased from 87 mph in 2009 to 109 mph in 2013. To put that in perspective, according to gizmag those speeds are equivalent to the winning gas-powered motorcycle of the same course in 1936 and 1975, respectively. That represents 40 years of conventional motorcycle progress in just 4 years for electrics, one of the reasons some see the future of motorcycle racing as entirely gasoline-free.