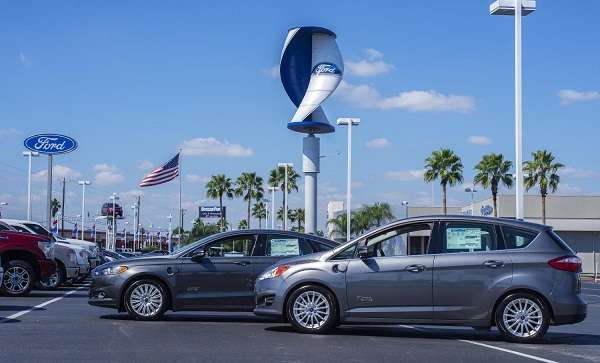 Ford flexes its green energy muscle yet again, harnesses the wind for dealers

Would you think differently about your car dealer if it had a futuristic-looking wind sail spinning overhead to generate a substantial amount of carbon-free electricity?
Advertisement

Ford is one of those companies that not only talks the talk, but also walks the walk when it comes to a commitment to sustainability.

We have documented Ford’s dedication to plug-in vehicles before here at Torque News. The automaker has currently sold easily the second-most plug-ins in the United States this year, trailing only Nissan and the record-setting LEAF. The automaker is also fond of producing great infographics to help the general public grasp the nuances of electrified vehicles.

Another pioneering effort in clean energy

Back in August, Ford released plans to build a mammoth solar canopy, the second-largest in the Midwest, for its Dearborn headquarters. Set to be completed in 2015, the $5 million undertaking will shade 360 parking spaces with 1.04 megawatts of solar panels that will produce 1.13 million kilowatt-hours annually, enough to power 158 average-sized homes. The canopy will include 30 charging stations for electric vehicles.

Now Ford has announced a pilot project in collaboration with Wind Energy Corporation, which will supply its futuristic Windy System to generate electricity for select Ford dealers.

The Windy System combines a wind sail, which will be emblazoned with the Ford and individual dealer logos, with a 7-kW solar array to generate 20,000 kilowatts of electricity annually. That is sufficient to power two average-sized homes, or charge a Focus Electric 870 times or one of Ford’s Energi twins 2,600 times.

Each Windy System will offset 14 tons of greenhouse gases annually. Their electricity will be used to power buildings, lights, and electric vehicle charging stations at the dealers, and they are expected to be installed by early next year.

“We are pleased to be working with Wind Energy Corporation to offer a pioneering, clean energy option to Ford dealers,” said John Felice, vice president, U.S. Marketing, Sales and Service for Ford. “This is yet another innovative tool to help Ford and its dealers address a global sustainability challenge.”

The Wind Energy Corporation home page describes the Windy System as: “a branded beacon of sustainability that delivers both energy and a point of view.”

The pilot project is only coming to four dealers at first, but these are no doubt some of the few dealers where you are likely to find a Focus Electric. They were selected based on demonstrated commitment to clean energy as well as their suitability for wind and solar power generation.

Of course, the day when every Ford dealer is flying one of these wind sails overhead will be a happy one indeed. It is still an expensive system, however, hence why it is restricted to a pilot project at this point. In the meantime, we applaud Ford’s continued demonstration of a keen interest in alternative energy.