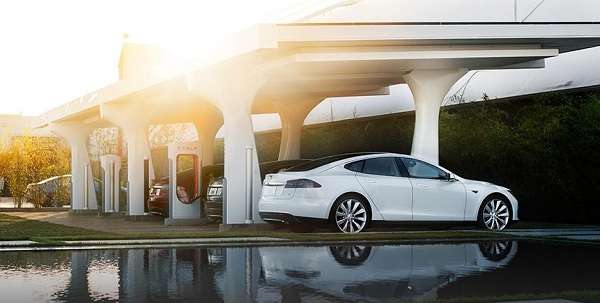 On Monday, Norman Hajjar pulled into Venice, California after traveling 12,183 miles over 24 days in a Tesla Model S. His epic road trip proved an electric vehicle can travel to all four corners of the country, though there is plenty of room for improvement.
Advertisement

Everyone knows that electric vehicles can’t do road trips. Or at least, they couldn’t. Times are changing, however, and Norman Hajjar would like to say that pure electric cars can in fact do road trips. Long, long road trips. Especially if you own a Tesla.

One of the reasons Hajjar, the Managing Director of driver research at plug-in vehicle information services company Recargo, embarked on this journey was to demonstrate the need for fast-charging infrastructure.

"The plausibility of a mass switch to EV usage in America simply can't be separated from the need for a robust fast-charging network. I've traveled over 12,000 miles in under 3.5 weeks. With the proper infrastructure, there's nothing an EV can't do," said Hajjar.

He is right, although the cars and the infrastructure must fit together. It makes sense to build out a massive interstate rapid charging network for Teslas capable of traveling 265 miles on a charge; for most range-limited electric vehicles or PHEVs with backup gasoline engines, not so much.

And the final statistics for the journey indicated more time spent charging than expected. According to the data provided, near the completion of the trip Hajjar had spent 213 hours on the road and 109 hours charging, which is surprising given the capabilities of Tesla’s fast charging stations.

Tesla Superchargers are capable of 120 kW charge rates, though not all have yet been upgraded to this power level. According to the company’s website, a Model S with an 85 kWh battery (like the one Hajjar drove on his trip) will recover 170 miles of range in 30 minutes using a 120 kW Supercharger.

After the first 30 minutes, however, the Supercharger will decrease the power output to protect the battery cells because high charging rates can damage an almost-full battery. Also per Tesla’s website, 40 minutes of charging will bring the battery to 80% of capacity but it will take an additional 35 minutes to top off the charge to 100% with the significantly lower charging current.

When taking a long road trip with Model S, the driver must choose between faster and more frequent charges and much slower and slightly less frequent charges. The 30-minute charge recovers about 170 miles whereas a full charge will get you close to 270 miles in typical freeway driving. Many of the stations are spaced closely enough for a driver to disconnect after the first 30 minutes of high-powered charge and still make it to the next Supercharger.

Given Hajjar’s trip data, it appears as though he more often opted for the slower full recharge. His ratio of driving time to charging time was approximately 2:1, or two hours spent on the road for every hour spent charging. If he had gone for a 30 minute recharge and traveled 170 miles with each fill-up, that ratio would be closer to 5:1. With the 75 minute full charge, the ratio would theoretically be 3:1.

The surprising amount of time Hajjar spent charging is most likely explained by two factors: most of the Supercharger stations are not yet upgraded to 120 kW and still provide “only” 90 kW, which will lengthen charging times. The other possible explanation is that Hajjar spent extra time at stops after his vehicle had completed charging (he appeared to have taken the scenic route, judging by the trip’s Flickr account), although Tesla’s systems know when the vehicle is no longer drawing power.

In any case, the successful completion of this record-breaking feat should be celebrated. Aside from the impressive fact that Hajjar covered a mind-blowing amount of ground solo, he was able to further demonstrate the capabilities of truly dedicated EV fast charging infrastructure. Nothing an EV can’t do, indeed.

Carl wrote on April 25, 2014 - 3:20pm Permalink
"Nothing an EV can’t do, indeed." ... Except get refueled on the side of the road because he missed a charging station. How long of an extension cord will you need there? As John Goreham mentioned in the article - hey, great, you can take (as Luke effectively labeled it in his other article) a 'toy for the wealthy' and go cross country. But unless you can afford this car - you simply can't take - or trust - anything other than one of these 'toys' anywhere else right now. I'm not saying that it's not possible for these cars in any areas of dense, urban population. On the contrary, that's where these cars shine - simply because of the population density. Move away from those areas, and an electric vehicle not only doesn't make sense, it's completely absurd. No, I'm not in bed with big oil as some people have commented - I'm simply saying that for rural areas - which comprise most of the area of this country - you can't apply the same solution with a car that has a range of 50 miles when there are lots of place you have someone who lives more than 50 miles from town...
Luke Ottaway wrote on April 25, 2014 - 4:59pm Permalink
Of course you can't apply the same solution, you make an excellent point. That is why electric vehicles should be, and are, used according to their intended purpose. You wouldn't buy a LEAF if you live an extremely rural area or need to drive cross-country...you probably could, but you'd quite frankly be rather dumb. A Volt, however, can do it, as can a longer-range EV like the Model S with dedicated infrastructure. John and I disagree somewhat on many things electric; he is right that you have to have a lot of money to buy the only pure EV that can go cross-country at the moment, but that is why Tesla is working to roll out a model at half the price that will still be capable of 200 miles on a charge. The hope is that other automakers will follow their lead, but I doubt any will do it as capably as Tesla.