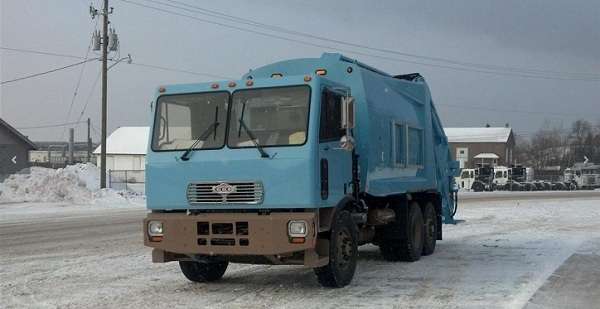 Garbage trucks are not generally associated with being clean or green, but pretty soon Motiv Power will provide the city of Chicago with the cleanest, greenest garbage trucks you’ve ever seen.
Advertisement

The duty cycles of garbage trucks, local delivery trucks, and other heavy-duty vehicles are not well suited to internal combustion engines. Urban or suburban routes with lots of idling, starting and stopping makes such vehicles ideal for electrification. Enter the Motiv Power Systems all-electric refuse truck.

With one already in operation, the City of Chicago has contracted to purchase up to 20 of the Motiv Electric Refuse Vehicle (ERV) for an estimated $13.4 million over the next 5 years, reports Charged EVs.

That works out to $670,000 per truck, but don’t forget the enormous lifetime savings in fuel and maintenance costs over a heavy-duty diesel garbage truck. Each ERV will save an estimated 2,688 gallons of diesel fuel and 42 tons of greenhouse gases annually.

The ERV is powered by the clever electric Powertrain Control System (ePCS) modular technology favored by Motiv and used in their electric school buses already operating in California. It boasts a total power of 375 hp with a gross weight of 60,000 pounds, and can haul up to 9 tons or 20 cubic yards of trash.

If you’re saying to yourself, “an electric truck that large must require a ton of batteries!” you are not quite right. It’s actually more than a ton. The ERV can reach a top speed of 50 mph, travel 60 miles and provide 70 compaction cycles on a single charge, drawing electricity from a massive 200-kWh reserve divided among 10 battery packs.

Now if you’re saying to yourself, “it must take a really long time to recharge all that battery capacity!” you are right, but it doesn’t matter too much for a garbage truck. The ERV comes with a 60-kW capable onboard charger, although Motiv claims a realistic charge time of 8 hours with their Universal Fast Charger. Fortunately, we can’t think of any garbage trucks that don’t take at least 8 hours off over the course of a day.

If you’re concerned about performance in the brutal Chicago winters, you may have a valid point. Motiv claims an ambient temperature operational range of -30 degrees Fahrenheit to 120 degrees, but cold weather will shorten the range of any electric vehicle. It will be interesting to track the real-world performance of the trucks in the winter months.

Plenty of benefits, but at a hefty price

The 20 Motiv trucks will make up just a small portion of the city’s 600-truck refuse collection fleet. However, 60 miles of range will allow the ERV trucks to cover virtually any of the city’s routes, and those lucky enough to have an electric garbage truck come to their neighborhood certainly won’t miss the noise or the fumes. The atmosphere will also thank each truck for the estimated 42 tons of greenhouse gases mitigated.

The main disadvantage, of course, is the high initial cost. A conventional diesel garbage truck costs about $250,000, while a natural gas-powered version runs close to $300,000. Motiv will have to lower its cost considerably to be truly competitive - cutting out nearly 2,700 gallons of diesel fuel annually could net close to $10,000 in annual savings depending on electricity rates, and maintenance cost reductions could be enormous, but that’s still a huge initial cost difference to make up.

Live in the Chicago area and want to check the ERV out for yourself? The public is invited for ride-alongs on September 23 at the CALSTART High-Efficiency Truck Users Forum Ride and Drive event.

Michael DiCroce wrote on September 17, 2014 - 5:13pm Permalink
Wow! What a waste of money. If the truck runs 10 years they'll only save 100k. That is a loss of 200k per truck. Chicago is ridiculous.
Carl wrote on September 18, 2014 - 10:04am Permalink
But that's the Chicago way - you can bet someone gave the mayors office something to spend taxpayer money this way.
mike w wrote on September 18, 2014 - 7:56pm Permalink
Well yes these garbage trucks are expensive. Not sure if the "enormous" maintenance savings will cover the cost difference between diesel and electric. I'm thinking it would but....At least they would be quieter and smell much better.
T-Pak the Tripod wrote on September 20, 2014 - 7:00pm Permalink
I live in California. But as an enthusiast in the refuse industry, the article title of an electric-powered garbage truck did catch my attention. While Chicago is going electric, many other cities and refuse haulers, in general, across the United States are slowly transitioning from the traditional diesel garbage trucks, to others powered by Compressed Natural Gas, or CNG. These trucks provide cleaner air, produce less noise, and have been proven to save money in most cases. Also, replacing a diesel truck with one powered by CNG, is equal to taking about 480 cars off the road. One last thing about the "70 compaction cycles": Considering that Chicago is one of the nation's largest cities, I along with others* in the refuse industry, can guarantee that each truck runs more than 70 cycles a day. It takes too long to manually spread the refuse throughout a rear loader's hopper to fill up the empty space, so the increased number compaction cycles will add up. *Enthusiast or actual refuse collector.