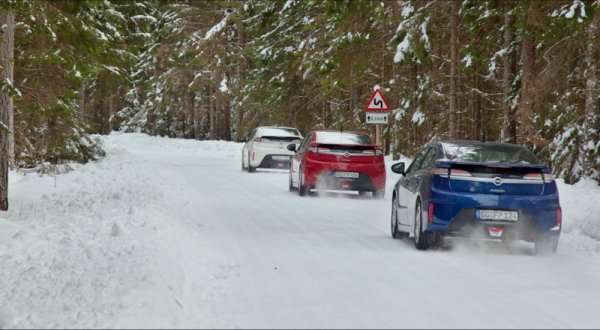 The maximum range for any electric vehicle is to be had at around a 60-75 degree Fahrenheit "Goldilocks zone," data from a Canadian fleet management company suggests. Outside of that, range degradation begins to seriously impact performance in an EV.
Advertisement

A Canadian fleet management company that makes a popular app called MyCarma for use in tracking vehicle usage and conditions has released data that shows warm and cold weather driving habits and range changes for customers using their app.

More than 7,000 trips in the Nissan LEAF were recorded in various weather conditions and used to plot range expectations for the cars. Only about 4,000 Chevrolet Volt data points were recorded, since they excluded trips taken when temperatures were below -4C (25F), since the Volt runs its combustion engine to augment battery thermal management and hence is not in EV-only mode.

The data shows that range loss as temperature leaves the Goldilocks Zone of 15-24 C (60-75F), range losses begin to mount. Batteries using the lithium-ion chemistry common in today's electric vehicles are known to lose performance outside of that temperature zone. Some automakers, like General Motors, chose to use thermal management to help counteract these losses. Others, like Nissan, chose to take the losses and allow an overall average to play out. Whatever the choice, it's one of several factors that contribute to sometimes extreme range losses in EVs when temperatures leave the comfort zone.

As temperatures leave the comfort ranges for both li-ion and humans, not only does that affect how much power the battery can supply, but it also changes how the driver demands that power. More and more of it will be required to heat or cool the cabin. This is also reflected in the FleetCarma (makers of MyCarma) data set as more and more range is sucked away to keep passengers in the car comfortable.

It should be noted that this data includes Volts and LEAFs of current vintage (to 2013). Nissan plans to deploy a more tolerant battery chemistry early next year and GM has made improvements to thermal management that may change things as well. Regardless, these are real-world numbers. You can find the full report at FleetCarma.

Minimum ranges are on a less harsh curve, but far lower in expectation with the best being, again at 60-70F at around 43 miles and at worst at 27F with about 19 miles of expectation. At the highest temperature on the chart (90F), we see a 39 mile minimum range expectation.

Minimum ranges were on a similar curve. At the best, the range was about 75 miles at around 70F, at worst about 48 miles at -15F. At 90F, minimum range was not much better than that at only 55 miles.

In Sum
The minimum and maximum ranges shown give two ends of the driving spectrum. Most drivers, obviously, fell somewhere in the middle. The minimum range was assuming the driver did nothing to promote longer battery life or lower their need for climate controls. The maximums assumed they did everything possible to do those things. On a daily basis, the numbers show, most drivers do something halfway between, doing some things to help range, but not everything possible every time.

The charts also give an indication of how much the weather as well as the driver can affect the range of their electric vehicle. Even if the driver does everything to the maximum, it's clear that weather will still play a big role in the vehicle's range potential. This is one of the issues with batteries that has been understood since chemical batteries became of use in automotive. We all know that our car starts more sluggishly in extreme cold and has less battery life in extreme heat. This is true of both lithium-ion and lead-acid battery makeup. GM learned this early on with their NiMH batteries in the EV1 as well.

Since few people live in climates that hold optimum temperatures for most of the year, the consideration of battery performance in various temperature ranges is very important for both the manufacturer and the potential buyer of an EV. This valuable data from FleetCarma shows numbers common to the northern half of the northern hemisphere (upper United States and Canada). In time, we may have data from equatorial climes as well as the central part of the hemisphere.