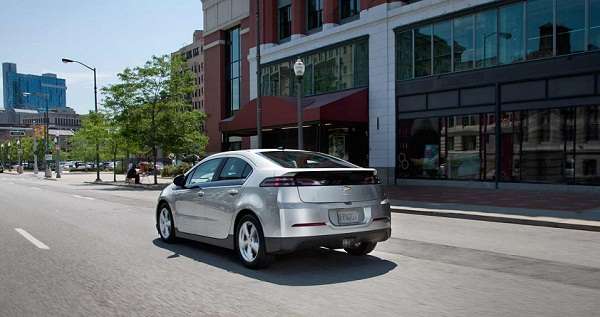 Chevrolet Volt passes a significant milestone, makes the most of electric range

Despite its limited electric range, the plug-in hybrid Chevrolet Volt has surpassed 500 million miles powered exclusively by electricity. Ensuing milestones will be reached in short order as the number of Volts on the road grows.
Advertisement

The Chevrolet Volt is a plug-in hybrid electric vehicle with an all-electric range of 38 miles. Once the 16.5 kWh battery expires, the Volt is capable of an additional 342 miles powered by a 1.4L gasoline backup engine. Data collected by Chevrolet shows that drivers are making the most out of the vehicle’s electric capabilities.

Most Volt owners allow the automaker to track their miles through the vehicle’s OnStar system. Per Green Car Reports, these drivers have now traveled more than half a billion miles on electricity alone, and the actual number could be up to 20% higher taking into account owners who didn’t share their data. Through May 2014 over 61,000 Volts have been sold in the United States.

Despite limited range, most Chevy Volt miles are powered by electricity

More important than the total electric miles, however, is the distribution of electric miles versus gas-powered miles in the world’s preeminent plug-in hybrid. According to Chevrolet’s data, 63% of Volt miles are driven exclusively by electricity.

Also of note to the average consumer is that the typical Chevy Volt owner averages 970 miles between fill-ups at the gas station. Considering how cheap electric miles are relative to gasoline miles, Volt owners who made their purchase to save money on fuel costs are very happy indeed.

It would be interesting to see similar data from companies like Ford and Toyota, who both sell prominent plug-in hybrids with less range. The Ford Fusion Energi and C-Max Energi both reach 19 miles on electricity while the Toyota Prius Plug-In is capable of 11 miles. The numbers wouldn’t be entirely trustworthy because all three vehicles may resort to gasoline support based on heavy driver demand even if the battery is not yet depleted.

Nevertheless, it would be fascinating to find out how much drivers of shorter-range plug-in hybrids rely on gasoline backup as opposed to pure electricity. And if Volt owners can satisfy 63% of their driving needs on electricity alone despite just 38 miles of range, what could drivers of plug-in hybrids do with 50 miles? It will also be interesting to see how owners drive their extended-range BMW i3 REx vehicles, capable of 72 miles on electricity and another 78 on gasoline.

Automakers will continue to balance cost with electric range, though the current trend is toward the low end of the range spectrum; here’s hoping we get less of the former and more of the latter.

Wm . Pomeroy wrote on June 24, 2014 - 10:39am Permalink
I get over 80 km. per overnite charge , which for Yanks is over 50 miles elec. driving . This is a terrific, well designed smart vehicle, that will only get better! I love it!
Chris R wrote on June 27, 2014 - 9:55pm Permalink
I hardly ever use gas in my Volt and typically range about 41 miles a charge. My onstar tracks me at 210 lifetime mpg. I actually worry about the fueling going bad in the gas tank!