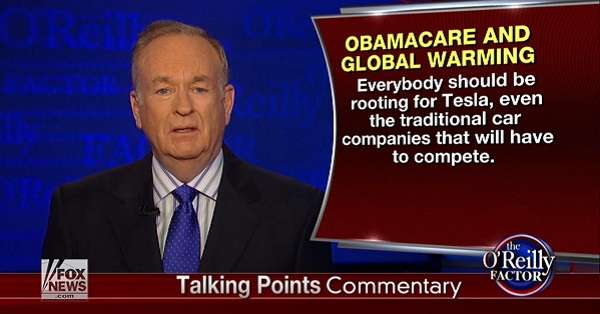 The popular conservative host of "The O’Reilly Factor" on Fox News has devoted plenty of attention on his show to Tesla this week, and he is a surprisingly strong supporter of the electric car company. Here’s why his opinion is so important.
Advertisement

On Monday, the day after a Tesla-heavy Elon Musk segment ran on 60 Minutes, O’Reilly brought up the disruptive automaker on his daily talk show. (See the video here – I’d suggest just skipping to 1:38.)

O'Reilly begins by dismissing man-made climate change and the new IPCC report, but then goes on to say that there is one company every American should support: Tesla Motors. In fact, he goes so far as to say that “everyone on the planet should be rooting for Tesla.”

O’Reilly reasons that if Tesla can make a clean car, the entire automotive industry can. The benefits he cites are cleaner air and thicker wallets, which we won’t disagree with. Equally as important is his statement that “I hope [Conservatives] rethink the energy part,” meaning the de facto opposition to alternative energy among many prominent political conservatives.

Rather than halting climate change, the benefits of EVs that O’Reilly focuses on are defeating the “enemies” that are OPEC and Vladimir Putin. Going beyond just Tesla, O’Reilly adds that “electric cars would greatly help America.”

This could be more important for Tesla and the electric vehicle industry as a whole than people realize. O’Reilly’s viewer demographic tends to be more conservative and more old, a demographic that is far more likely to be skeptical of electric cars than most. But if one of the most prominent champions of all things conservative starts talking up Tesla and the benefits of electric cars, a whole lot of people might consider them more seriously.

Even better than Monday’s clip was a six-minute debate segment with Fox News pundit Eric Bolling on Tuesday’s O’Reilly Factor. Repeatedly rebuffing Bolling’s scornful display of ignorance of Tesla and electric vehicles in general, O’Reilly pointed out that electric cars are not powered by 100% coal (as many critics, especially Bolling, would have you believe) and dismissed the notion that the federal $7,500 tax credit is special treatment, because it is granted for purchasing a product that is “good for the country.” He also reminded Bolling that Tesla did in fact pay back their government loan.

Continuing his theme of cleaning our air and hurting our enemies, O’Reilly effectively offers an endorsement of electric cars to his viewers. He even cites Tesla’s plan to bring their vehicles to the mass market, and tells Bolling that “you can be as cynical as you want, but this is big.”

I gained a lot of respect for O’Reilly this week. According to his website, over 5 million viewers tune in to his show each night; his opinion influences a great segment of the American population, and it is heartening to see him take a logical and thoughtfully considered stance on electric vehicles. Taking up a position strongly in support of Tesla and electric vehicles in general sends a message to his conservative fan base that even if you have blinded yourself to the reality of climate change, there are plenty of reasons to get behind the EV movement. O’Reilly’s views will cause many others to reconsider their own, and that is great news for those of us pulling for electric vehicles to succeed.