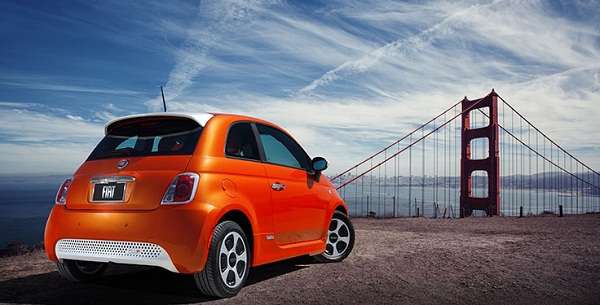 2015 Fiat 500e hits California and Oregon and it is cheap

A slightly refreshed all-electric 2015 Fiat 500e is now available at select studios in California and Oregon. If you live in one of those states and are in the market for an EV, the 500e deserves serious consideration on lease price alone.
Advertisement

The Fiat 500e is something of an enigma in the electric vehicle realm. It has wowed critics and brought in a few awards, leads its class in electric range with 87 miles and highway efficiency with 108 MPGe, and is available with a great lease deal – yet until this summer was only available in California as a compliance car, and its CEO quite frankly hates it.

As though it wasn’t previously clear that the 500e was only ever intended to be a compliance car to satisfy California ZEV regulations, Fiat-Chrysler CEO Sergio Marchionne recently urged customers to stay away from the sexy and fun-to-drive 500e because his company allegedly loses $14,000 with each one sold. (Fortunately for Marchionne, only about 1,300 have been sold through the first 8 months of this year).

Now sales of the 500e have expanded to Oregon, although don’t expect many to be made available. The 2015 model comes with a new center console and two new color choices, and despite its MSRP of $31,800 is offered with a fantastic lease deal of $199 per month for 36 months with a $999 down payment.

What is interesting is that despite Fiat-Chrysler’s resistance to sales of the 500e, they seem to be doing things right in support of the electric two-door. In addition to the attractive lease deal, Fiat offers transportation alternatives for trips beyond the vehicle’s range or cargo capacity. The Fiat 500e Pass program partners with car rental agencies to allow owners to rent vehicles for free 12 days per year for the first three years of ownership.

Drive Revolution Event co-chair Bengt Halvorson said it best: “The Fiat 500e is attractive and fun. It remains a model that will, with a short test drive, convert people who hadn’t even thought about electric cars into EV enthusiasts.”

Which is why it is such a shame that Fiat-Chrysler will not make the 500e more widely available. From a purely economic perspective, it does not make sense to expand sales of a vehicle on which you lose $14,000 with each sale. However, it is worth noting that Mitsubishi claims it can turn a profit on the $23,000 i-MIEV.