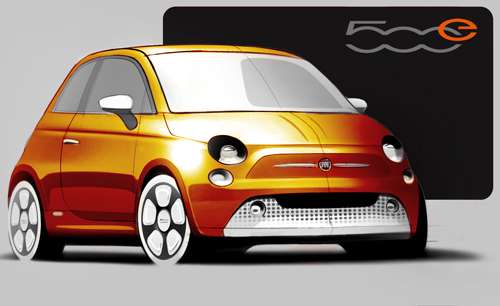 The 2013 Fiat 500e has taken the honor of being named Top Electric Vehicle by the Northwest Auto Press Association (NWAPA) during the group’s first competition between electric vehicles labeled the Drive Revolution.
Advertisement

Based in Washington and Oregon, NWAPA has the distinction of focusing on the states with the greatest number of EV recharging stations in the country, thus the interest in such a comparison.

The green car event was held in the city of Portland OR, where the 500e was compared to the array of zero-emission vehicles currently available – a total of 17 vehicles were on hand for consideration in more than one category, including the Fiat.

Even plug-in hybrids and clean diesel models from various automakers were considered.

"The Fiat 500e is an electric car with sex appeal," said Bengt Halvorson, Drive Revolution Event Co-chair. "Unlike other electric vehicles, we think the Fiat 500e will lure in a type of buyer that otherwise might not even have considered a plug-in model."

Though the Fiat 500e is only available in California at present, NWAPA sees it finding acceptance among urban commuters in many of the country’s larger metropolitan areas.

The 2013 Fiat 500e is rather stylish compared to the other small electric cars and plug-in hybrids on the market. Though we lack empirical data, we assume the new electric Fiat retains the spunky dynamics of the other fun-to-drive vehicles in the line.

Just because you want to save money on gas and help green the planet doesn’t mean you want a stodgy looking ride, does it?

The EPA has rated the 2013 Fiat 500e with an 87-mile range and an industry leading 108 miles per gallon equivalent of pure, zero-emissions electric power.

It has a base price of $32,600, which includes the destination charge. However in California, the only place you can get one this year, the little Italian EV can be purchased for as little as $20,600, after federal credits, state incentives and FIAT rebates are deducted.

"We wanted a Fiat 500 that happens to be fully electric," said Jason Stoicevich, Head of Fiat Brand-North America. "NWAPA's Drive Revolution accolade reinforces that our Italian style and engaging dynamics, combined with a fully electric powertrain, have created a zero-emissions Cinquecento that appeals beyond just green car shoppers."