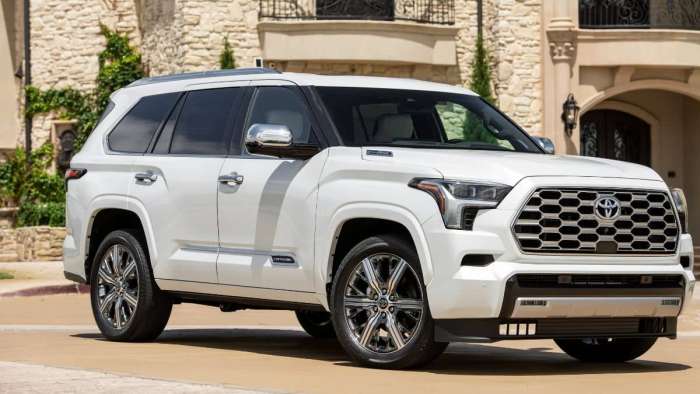 Toyota took away our beloved Land Cruiser and gave us the much better 2023 Toyota Sequoia Instead. Is it good enough to fill Land Cruiser’s shoes?
Advertisement

After covering the long-awaited 2023 Toyota Sequoia for some time, I am honestly glad to see its official debut brought to us. Toyota dropped a press release this morning and it covers the A-Z of the 2023 Toyota Sequoia. In this article, we will cover aspects like the price, specs, and just who would buy this behemoth of a vehicle.

I first want to add that this re-design looks absolutely stunning. Toyota seems to base its other models on this look as well. For instance, the new Tundra has the same windshield-to-side door look as well as the grill. Also, the rumored 4Runner re-design looks like it shares some aspects of this design as well. It’s almost as if they took the front half of the 2022 Toyota Tundra and put an SUV back onto it. For the sake of simplicity, I enjoy resemblance throughout models. The ‘90s Ford and GM models had something like that as well with each model sharing something from the next.

According to the press release, all 2023 Toyota Sequoia will be hybrids pushing out 437 horsepower and 583 lb.-ft. of torque. They will be using the Tundra’s I-FORCE MAX drivetrain. As we covered in a previous article, this drive train is more set towards power output rather than gas mileage. Because of this pseudo-hybrid system, the 2023 Sequoia has the power to have a maximum towing capacity of 9,520 lbs., impressive for a luxury SUV. 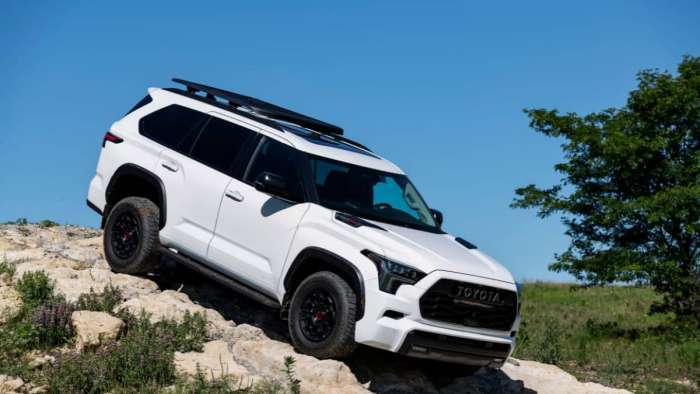 Toyota will be sharing the body on frame chassis from the Lexus GX models and Land Cruiser. If you may remember, Toyota discontinued sales of the Land Cruiser in the United States this year. This makes the Sequoia more comfortable, better handling, and off-road capable just like its cousins. Could this be Toyota’s plan all along? To stop sales of the Land Cruiser and sell the Sequoia instead? If you think about it, it’s a pretty clever idea. A lot of car companies discontinue sales of a similar vehicle so that they won’t cut into the profits of their new flagship models. It’s an old business tactic that ensures high sales.

The 2023 Sequoias suspension gets a nice upgrade from its previous generation with AVS air suspension and Load Leveling technology. The Sequoia is really built for all applications. Soccer moms and towing dads. Great family car. Of course, with this Monmouth SUV, you get third-row seating with comfortable leg room for those in the back. The trunk gets some special treatment with some cargo separators and shelves. The TRD PRO and Capstone models get some nice towing technology like Toyota’s Straight Path Assist to help backing up trailers.

Yesterday we covered an article about Tundra’s towing brake system and how some owners were frustrated with the automated braking with a trailer. Will the Sequoia have that too? Hopefully not as this caused a lot of fear among some Tundra Owners.

As of this press release, there will be 5 available trims all hybrids. The SR5, Limited Platinum, TRD Pro, and capstone models. All except the TRD Pro come available with 4x2 or 4x4. The TRD Pro only comes with the 4x4 option.

The interior gets a really nice modern make-over with an 8inch display with all of Toyota’s available services like Apple Car Play and Android Auto. Of course, you also get the trial for AT&T’s hotspot.

I hope to see this SUV flourish in the market. Especially labeled as a hybrid, this SUV could really compete with others like the Tahoe and Suburban. Stay tuned for our other articles where we will cover the price and trims available in-depth for the 2023 Toyota Sequoia.