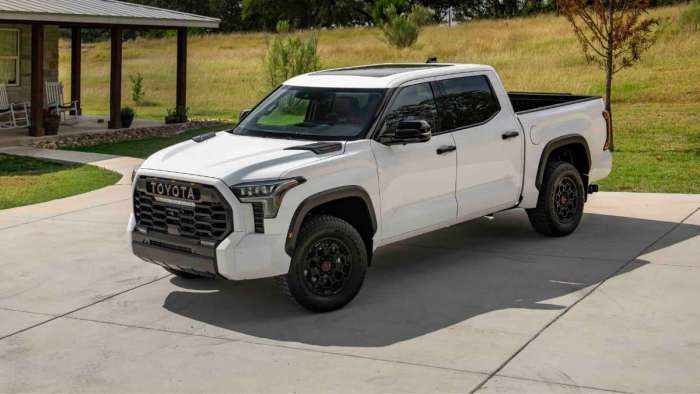 If you have tried to back up your boat or trailer for the first time, you know how intimidating the auto back-up braking system can be on the 2022 Toyota Tundra.
Advertisement

If you buy a pickup truck, you are either buying it for work, or for your everyday driving. Now if you have it for everyday driving, chances are you are going to use it to take the family pontoon to your local lake and go tubing. So after hooking up the cumbersome hitch and finally getting in your truck, you take your family for a nice afternoon on the lake. After telling the kids to wait outside while you disembark your boat from the ramp, your car starts to brake without you pressing the pedal. At first, you think it’s something wrong with the brake rotors. Nope, it’s just your 2022 Tundra thinking that you need to brake because you have a trailer attached and are backing up at the same time.

This feature which is still being debated as useful or not has caused a lot of Toyota Tundra owners to really think twice before backing up their pontoon into the water. John Shepard posted a few days ago how he found how to disable this system in the 2022 Toyota Tundra. In the 2022+ Toyota Tundra group on Facebook, he posted, “This is the button you need to press to stop your truck from automatically braking when backing up a trailer.”

Now in the comments, a lot of people were bashing this system which turns on automatically from the factory when you drive. Let’s take a look at what some other owners said about the 2022 Toyota Tundra’s auto-backup braking system. Randy Cohen said, “I press mine every time I pull in the garage. Hate that thing! It’s scared the crap out of me more than once.” 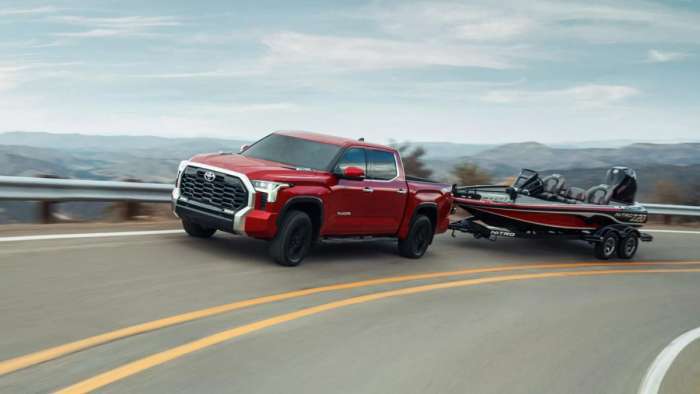 Now there are a few ways you can disable this system. In the post, Shepard stated that there is a button on the far right side of the top row of buttons next to the steering wheel on the left. That button disables the system. However, on some trucks, you may have to either hit the little “ok” button on the steering wheel or, go into your settings and disable it from there via the driving preferences.

Now in theory, this is a simple fix but imagine all the Google searches some Tundra owners had to make on why their Toyota Tundra kept braking when it was backing up with a trailer. I think that Toyota should’ve at least put some sort of message on the trip display showcasing that this system was on when it was activated. I don’t really see how this could be a safety issue because nine times out of ten you are not backing up a trailer at 30mph. At least I haven’t.

Hopefully, Toyota can make this issue something that can be resolved with a simple voice command or maybe at least make it visible on the trip display. A lot of the owners seem to be annoyed by it. If I encountered something like that I would sure be annoyed.

What do you think? Do you have trouble with this issue? Let us know in the comments below.

Brian Parkinson wrote on June 9, 2022 - 11:29am Permalink
Mirrors and knowledge how to back a trailer are needed, if not buy a car!
Aaron R Tovar wrote on June 9, 2022 - 1:15pm Permalink
Backing up not baking
Armen Hareyan wrote on June 9, 2022 - 4:09pm Permalink
Thank you Aaron. We edited. Much appreciate your input in Torque News.
Karl wrote on June 10, 2022 - 9:32am Permalink
I thinks it useless as about as much as the vehicle shutting off @ a red light- waste of time and money-- and just something extra to cost if it needs to be replaced- make it simple.
Former Tundra Owner wrote on June 11, 2022 - 7:43am Permalink
This type of system is either standard or available on most, of not all recently produced vehicles. It probably behaves similarly in them all as well. All of them likely misbehave in similar ways as well. While backing and a slight change in grade is approached, BRAKE! Backing any kind of trailer, BRAKE! It can be startling if you aren't expecting it. And you're likely not expecting it. Some vehicles are smart enough to automatically recognize the presence of a trailer, but not smart enough to remember it's there when you start to back up, like my Ram 1500. Not really all that smart, huh? It is pretty simple to turn off in my Ram 1500, but then it is very easy to forget to turn it back on. This shouldn't be a problem. It really shouldn't be necessary to turn it off just to back up a trailer. We pay a premium for these systems, some of which are forced on us by safety regulations. They will likely cost a bundle to repair when they fail. They should work much better.
John Sisk wrote on June 12, 2022 - 8:31am Permalink
Our experience was not very good with this system. I knew I had to turn it off and I did so before backing up.We had our bikes on the back of the truck on a rack.It wouldn't let me back up so I turned the truck off to reboot. We tried it again and it still wouldn't let me backup! luckily I had drifted down the driveway enough to make a U-turn in the driveway to get out of the driveway.We were terrified pretty much all the way home that it would happen going forward.I did have it off and it would not let me go I'm pretty upset about it.We were over 400 miles from home.Refuel,rest stop etc.
To wrote on June 15, 2022 - 6:12pm Permalink
Agree and spent 45 min on phone work Toyota tech agent until we figured out the name of the system and found how to stop it. I can't think of a time I'll ever choose to use it.