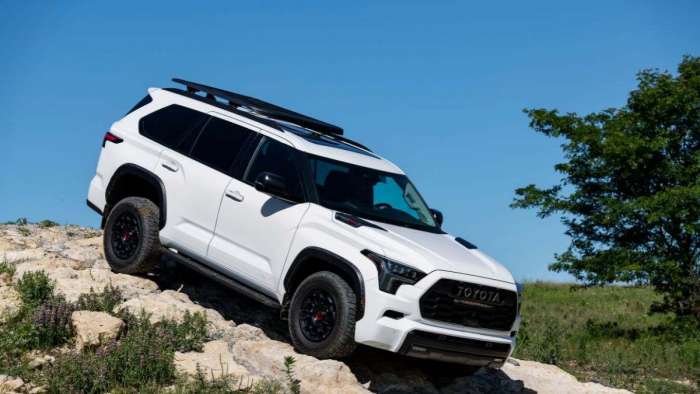 This one tiny little nostalgic feature which won’t be available on the new 2023 Toyota Sequoia may cost Toyota it’s future buyers.
Advertisement

While the new Toyota Sequoia looks incredibly handsome, a lot of thoughts on it are not. One of the best features available on the older Sequoias was the fact that you could roll down the back window in the trunk like an old station wagon. This was significant because a lot of the owners were mostly family people. This means that sometimes it was a surfboard hanging out the back or maybe some 2x4s that your wife wanted you to get for the patio she wants. Regardless of what, owners loved the older sequoia for this reason. Now in my opinion, the new Sequoia is basically a new Tundra without a bed.

Ever since Toyota announced that the new 2023 Toyota Sequoia would not have the rollable back windows, a lot of people have taken to the forums and groups to express their sorrow or why they wouldn’t buy one. If you are sold buying this car simply because the back windows can go down, then I don’t think this is that big of a deal. You can easily go buy a 2021 model year with a warranty and all the amenities you want for almost 30k less than a regular 2023 Sequoia.

On Facebook’s 2023 Toyota Sequoia page, David Glenn said, “The lack of the back window going down is a 100% deal breaker for me. I have a 2020 TRD Pro and won't downgrade. Was hoping Toyota would change the back window before production.” Now, if I had the financially means to happily afford a Toyota sequoia, and if I really needed a huge SUV, then the Sequoia would definitely be my choice. With the luxury and reliability Toyota has shown, I think that it might be a pretty successful car. Yes, it shared the drivetrain from the new Tundra, but I think Toyota has seen all the problems and fixed them accordingly. Let’s take a look and see what some of the other owners think.

Cee Cee said, “True. I use that for surfboard and wood and pipes shopping.” Just like I mentioned above, a lot of people used it as a way to haul long things that you would wither put on your roof. I guess what would happen would be that if you decide to own a new Sequoia, you may want to also invest in a nice roof rack than the one provided by the factory or dealer. Would we maybe see this feature in the 2024 model?

Nick Proia said, “Not going to happen. That’s a major change that won’t happen until at least the next major overhaul. 10+ years.” So, I guess you can kiss your rollable trunk window goodbye because the rumors of the next 4Runne not having it are probably going to be true. Why is Toyota doing this? Nobody really knows. But until the day where Toyota decides to redesign all of it’s non SUV vehicles like they did for the Tundra and Sequoia, you may just want to put that 2x4 on your roof.

What do you think? Is this a deal breaker for you? Let us know in the comments below.