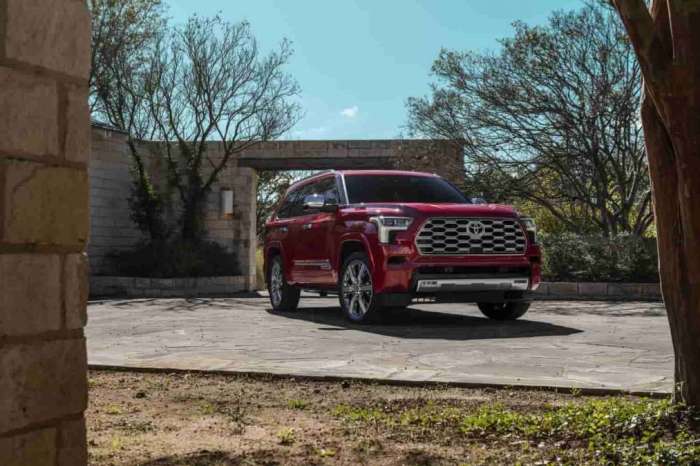 Make Sure You Do This Before Buying The 2023 Toyota Sequoia

If you are one of the prospective buyers of the 2023 Toyota Sequoia, you may need to do this before even thinking about ordering your Sequoia.
Advertisement

If I was to buy the all-new 2023 Toyota Sequoia, I would probably be the type of owner to keep it in a garage. It’s a luxury SUV meant to haul your family around and have an “I’m-an-important-person” status look to it. I mean there really isn’t any harm in keeping it outside although It’s kind of like when you buy any brand-new car and now you make your kids wear shoe covers to get in for the first 6 months. Maybe after a year of ownership, I would keep it outside but until then it stays in the garage.

However, a recent question arose on Facebook’s 2023 Toyota Sequoia group about whether or not the Sequoia will fit into the garage. Vikas Rupal asked, “Do you guys have garages and if yes, what’s the height of the door. My garage door is 7 ft high. Sequoia is 77 inches tall. I still got 7 inches of clearance. Anyone has any experience with that.”

Before we see what, other people said about this topic, let’s first know the dimensions of the 2023 Toyota Sequoia. Because Toyota has not yet released the true specs of the 2023 Sequoia, we will base it on the 2022 Tundra. Experts say it is expected to be around those same dimensions. So if you can fit your 2022 Toyota Tundra in your garage, you probably won’t be too concerned although if Toyota launches an extended wheelbase version, it may cause some concerns. 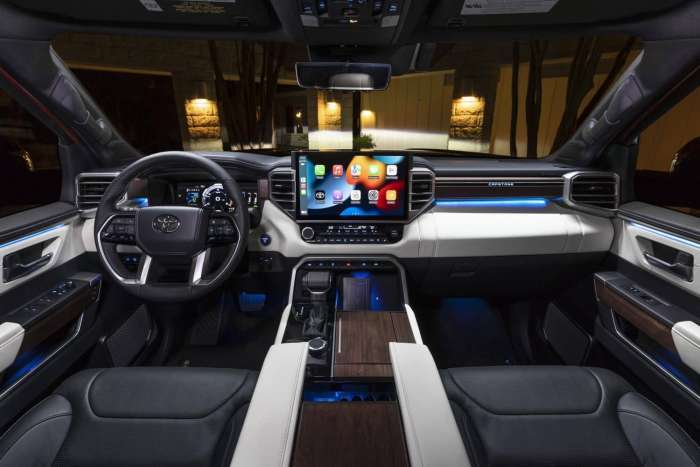 So, on the Facebook group post, Ty Foreman said, “You’ll be fine as long as you don’t get a 3” lift and 37s.” I never thought of even putting a lift kit on the brand-new Sequoia. I have seen lift kits on older ones, but I haven’t even seen a rendered drawing of a lifted 2023 Sequoia.

Here’s another thing to be concerned about, let’s say your Sequoia barely clears your garage’s roof. This means that there is no possibility of adding a fatter tire, bigger rims, or even a roof rack. All of this would make your vehicle taller thus making it not clear your garage. If you have a garage over 8 feet high, then you shouldn’t be concerned but until Toyota releases the true dimensions of the 2023 Toyota Sequoia, you may want to hold off ordering one.

Speaking of roof racks, check out our other story on how mods might void your bumper-to-bumper warranty on the 2022 Toyota RAV4 Hybrid.

Because of height problems, this means you may not be able to add anything to the front or rear of your Sequoia either. Things like bull bars or a spare tire on the back. Anything to make the car’s dimensions bigger in any form will probably make fitting your Sequoia in your garage even harder. We recently moved to South Carolina about 5 years ago and our 2007 Honda Odyssey would fit in our garage, but it meant parking our Toyota Prius next to it was a challenge. That’s why our van has been sitting outside for the past 4 years and I have even noticed some weathering on the paint.

If you know that your Sequoia won’t fit but you still really want it, maybe invest in an outdoor garage or maybe just buy a tarp and cover it during storms or extreme heat. Any abnormal weather will surely cause wear and tear to the paint of the car. Especially if you get it in red or black. Our modesty used to be a shinny black but now it looks like one of those old black binders you find at the store.

What do you think? Should Toyota release the dimensions before taking orders to make purchasing one easier on the customer? Let us know in the comments below.

Gary Boudreau wrote on May 27, 2022 - 7:11pm Permalink
Please! I've been looking for the dimensions to see if garaging the vehicle would be an issue.