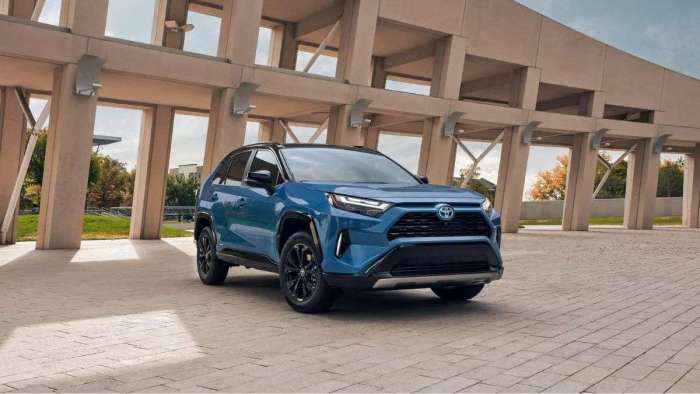 Are The Toyota RAV4 Hybrid Dealer Markups Slowly Dying? Back To MSRP?

A recent question on a Toyota group showed that new owners of the 2022 Toyota RAV4 Hybrid are either getting it for MSRP or a very low dealer markup.
Advertisement

In case you have not been to the dealership within the past 2 years, here is a quick lore update with the whole dealer markup situation. Pre-2020, you could buy a vehicle for under MSRP which was pretty common. Dealerships still made money off the incentive which the manufacturer gave and even then, the dealer made money off the service department. However, after the global shutdown of 2020, dealerships started to raise the price of a car even though the manufacturer said a different price for MSRP. Dealers call it a “market adjustment” but in reality, it’s really not needed. A dealer can still make a dime off the car even if they sell it below MSRP, but it all comes down to greed. How greedy you ask?

MSRP for a brand-new Mercedes EQS starts at about $105,000. However, dealerships won’t let it go for under $170,000. Why? It’s simple. Why let a very anticipated car go for MSRP or even below when we can mark it up and sell it for more and no one will say anything because it’s a highly anticipated car? Dealerships were created to stop auto makers from ripping you off. Today they are the ones taking your money for simply being a middleman.

On the bright side, it turns out we are starting to see a little less of this as the world finally gets back on its feet. In specifics, the 2022 Toyota RAV4 Hybrid is a very highly anticipated car. In this day and age, owning a hybrid is like owning a 50-year-old 401k. Dealerships saw this and took advantage of the market by charging an insane amount of “market adjusted fees” and sell it to some millennial trying to save on gas. However recent buyers have stated that they are starting to see less and less of that.

On Facebook’s Toyota RAV4 Hybrid page, Kathy Jong said, “How much is everyone paying over MSRP, specifically the mark up by the dealer? Is this normal for all dealerships now?” That’s a pretty reasonable question considering the everyday buyer would probably want to know that information considering these troubling economic times. Everything has gone up except wages so the saying, “every penny count” is probably good words to live by. Let’s take a look and see what other recent buyers had to say.

Speaking of owners, check out how owners explained how they were able to take off their dealer installed roof racks on our recent article.

Brady Reeder said, “I paid zero markup MSRP plus tax out the door.” I think this is starting to become more common given that a lot of people are now trading in and getting a hybrid. This means that more and more hybrids are being sold, leveling out the playing field. If in case gas prices decide to go down, then I think maybe the over MSRP charge might come back. However personally, I see this as a threat on capitalism. The more and more people become greedy, the more the government would be forced to take action and stop companies from over charging in times of a crisis.

What do you think? How much over MSRP did you pay? Let us know in the comments below.